Thousands of people are descending on Britomart train station today to walk through a section of Auckland's new underground rail tunnels.

By mid-afternoon 4000 people had walked through the City Rail Link tunnels, and thousands more were expected by the end of Sunday.

The 600 metre walk begins at Britomart and passes under the historic Chief Post Office building and Commercial Bay Precinct, before crossing to another tunnel for the return.

Ten-thousand tickets to the open day were snapped up in 15 minutes earlier this month, although many were not notified until days later because of a glitch.

The event had it's own hashtag online, and many people paused for selfies. 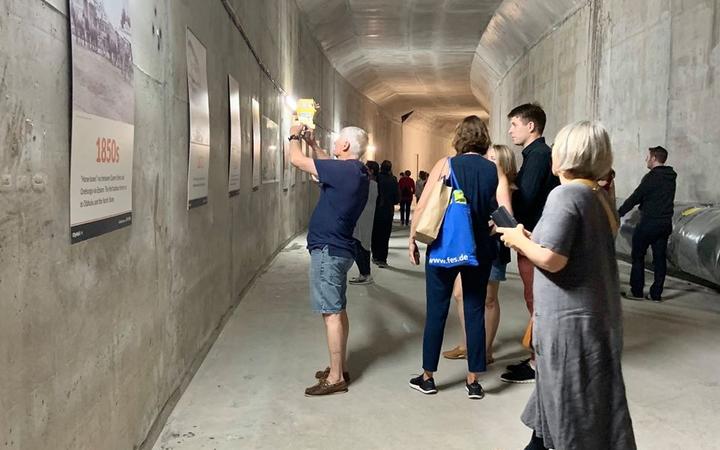 Auckland resident and tunnel fan Melanie Webber was among those getting a glimpse of the city's future rail network.

"I love a bit of public infrastructure, and my mother lives in Quay West, which I was standing underneath just before.

"So having seen all the building - I live in the city, it's really exciting to see what's coming, and I'm a tunnel fan.

"I like the focus on public transport and making sure that the networks work really well - you could see the engineers standing there, and they just looked so proud, and we waved at them and they waved at us."

City councillors and the Transport Minister Phil Twyford were among those who walked through this morning.

The City Rail Link will be a 3.5 kilometre underground tunnel aimed to provide better connections for Auckland's rail network.

City Rail Link chief executive Dr Sean Sweeney says there were many people who missed out on tickets, but 10,000 people was the most people they could manage to fit through safely.

"Although work has been suspended for the day, the tunnels still remain an active construction site".

"Ticket demand was a reassuring reminder of public support for the City Rail Link and we will be looking at other opportunities over the next five years where we can invite people for other 'sneak peeks' of a project that is re-drawing Auckland's transport map."