Parts of central Wellington will remain at a standstill for months as authorities admit they still don't know how to fix a key part of a sewerage collapse in the central city. 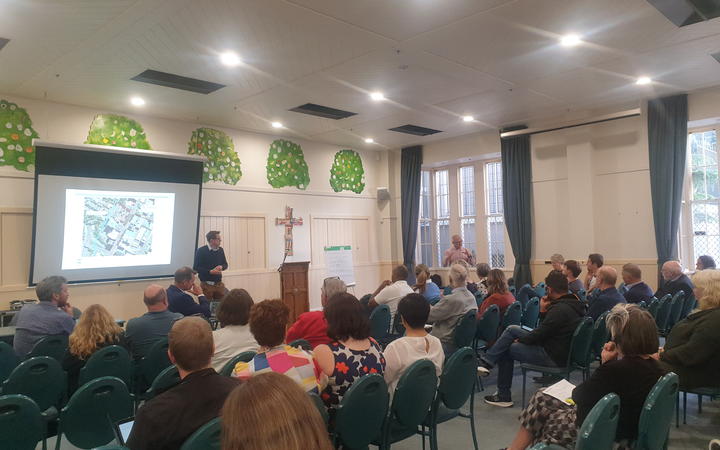 Exasperation was clear at a public meeting last night for people affected by the road closures and engineering work in central Wellington. Photo: Karoline Tuckey

A major sewerage pipe caved in just days before Christmas, at the corner of Willis and Dixon streets, leaving workers pulling long hours to stop millions of litres of sewage spilling into the harbour.

The work, including containing the waste and setting up a temporary pipe, has closed sections of key roads through the city, which remain blocked as the city returns from holidays.

But Wellington Water says plans to fix one section will not even be drawn up for several months.

Exasperation was clear at a public meeting last night for people affected by the road closures and engineering work, who gave a crisp "do better" message to the agencies involved.

Having asthma and heart trouble, Dixon Street resident Cathy Mills needed an ambulance, but with the road closures paramedics had trouble getting to her apartment building.

"It's only from Newtown to my place, and my sister can normally get me there in 10 minutes - it was delayed by a long way. When they finally got there they said they didn't realise Dixon Street was closed, and they had to Google on the map to find a way to get back down to where I was."

"We are left in the dark. Can't council send letters to residents to keep them up to date?"

Another man at the meeting voiced concern about whether fire trucks could face delays if there was an emergency.

City GPs practice manager Lorraine Wood also says ambulances have been delayed from reaching them, though an alternative route through a congested back lane has been established.

"We can't get ambulances and other things into our practice, which is quite a problem.

"And it makes it hard for patients to come and see us, they aren't aware of what's going on, they find they can't get car parks. It's hard for them to reach us and they're late, our doctors are then finding it hard to run to time, and that creates tensions.

"Our experience with [communication about this] hasn't been fantastic, but we've had the meeting tonight and we understand communication is going to improve, so we look forward to that."

Businesses cut off from customers

He said an advertising scheme was needed, so people know they're open.

Another business owner at the meeting told the agencies staff she had been loosing customers. "People do generally think that you're closed because of this," she said.

How long will it take?

Project director Ian McSherry from Wellington Water said the difficult and "risky" part of the job was decommissioning the original collapsed pipe on Dixon Street, which could take months before a plan could even be drawn up.

"It's 22 metres deep at the top end, dealing with things at that depth is complex and quite hard to do and bespoke, so we want to take our time, do proper risk analysis, and have a proper robust plan before we go in there and start doing any physical construction work.

"That's risker. It's still very early days on that project, we don't at the moment have a solution. We are hoping to have a concept of how we're going to deal with it in several months."

Geotechnical work to find out more about the ground around the collapse is underway, but parts of Dixon Street are expected to remain behind barriers for some time.

The second half of the job is replacing the temporary above-ground pipe on Willis Street with a permanent underground pipe, which begun this week. This is expected to be straightforward and to be done within a few months, McSherry says.

"That's bread and butter for us - laying pipes in the streets ... we're trying to get Willis Street back up and running as quickly as possible - we're hoping a number of months for Willis Street."

The new permanent pipe will run from the intersection of Willis St and Dixon St, down Willis St and onto the obsolete State Highway 1 offramp at the end of the Terrace Tunnel, he said.

While work moves ahead the closures in Willis Street will progress down the street leaving only part of the road closed at any one time.

"With this project - what you normally take six, 12 or 24 months to do, we're trying to smash it through in two - so one of the consequences of that is that stuff that would normally happen in sequence is happening together, so it's easy for people get left behind.

"So, we change the fences around one day, the emergency services driver might not have got that update that day."

But he said new staff had been hired to help with this, and regular letters updating residents and other organisations have begun.

Van Paassen said another public meeting would be held in the next few weeks with more updates, and to hear about issues people were experiencing in the area.