Sewage flowing into Wellington harbour is continuing to cause problems this morning.

A collapsed pipe has caused more than five million litres of sewage to spill into the harbour since Friday morning. The burst underground pipe will be replaced by an overground pipe.

Wellington Water diverted a significant amount of the wastewater through an old pipe as a temporary fix, bring a stop the amount flowing into the harbour.

Crews have been working in dinghies to clean up along the shoreline.

It still isn't safe swim, particularly along the waterfront between the port and Oriental Bay, and will take about three days to clear up. Scorching Bay, which is around the corner, is safe to swim in.

"We've been able to remove all the wastewater from a big storage tank under the Michael Fowler Centre. We're now really satisfied there's no more wastewater going into the harbour."

He said it was tricky to run the pumps on the foreshore manually and use temporary pumps.

Crampton said sewerage pipes would run overground "right at the top of Willis St" for another two months acknowledging it could make business owners "grumpy". But he said they would be kept in the loop on any progress.

The pipe is 600mm in diameter and while it could be awkward to work around it, "people are going to have to live with that for a couple of months".

"Straight after Christmas, we will begin with the permanent solution. We're targeting the end of February, we'll have the new pipe put underground and it will all be back to normal."

"The questions have to be asked after we overcome the problem as to what caused this and is this more symptomatic of an under-investment in infrastructure or is it just an unfortunate incident." 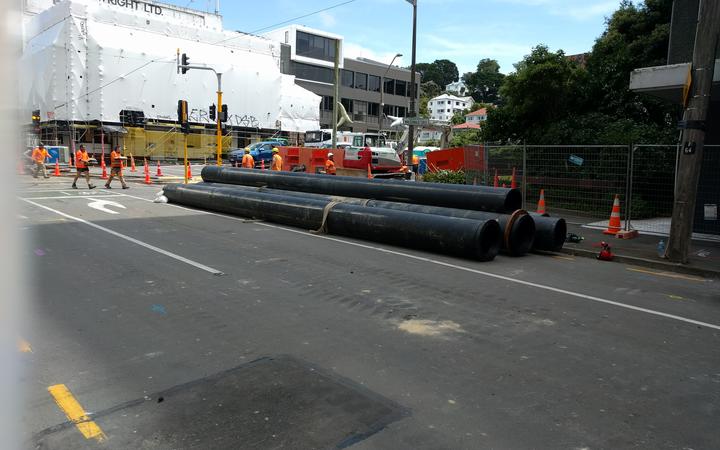 City traffic will continue to be disrupted with streets closed so urgent work can be done on fixing the wastewater system.

Parts of Willis and Ghuznee streets remain closed, and Vivian St will be closed overnight this week from 8pm to 8am.

Road closure clarification: Dixon St will be closed from 9am Monday. Willis St is closed from just north of Dixon St; there will be access to Willis from Boulcott St to just before Dixon St - but no through traffic.

We’re sorry for the inconvenience.