The Independent Police Conduct Authority (IPCA) says complaints have surged by about a third in the past year, putting a strain on its resources.

The jump is due to the police now forwarding hundreds of complaints that up until 2018 were being shelved.

Up until then, police only referred formal complaints made online or in person to the IPCA to investigate.

But complaints made through a couple of online portals, or in some police districts, were not being passed on.

When the police asked for clarification the IPCA advised that all complaints must be investigated, leading to the huge increase.

In some cases investigators have up to 120 cases on the go at any one time.

IPCA Judge Colin Doherty said the work load was leading to a high staff turnover, and the authority was not reaching its deadline targets.

"We've just looked at the last four months of the current year, and when we compare the volume of complaints for those four months, month on month, with the ones in the previous year, the increase is something like 39 percent," Judge Doherty said.

"We have been significantly stretched."

In a statement, the police said improved access to its online complaints processes had led to the rise in the complaints, but did acknowledge districts also needed to improve.

"There has been an increase in the number of matters forwarded to the IPCA by police as the ability for people to make a complaint online has been improved," the statement said.

"The increase can also be attributed to the fact that 'Expressions of Dissatisfaction' made to police were previously managed by the districts where the reports were made.

"These are now being shared with the IPCA and managed through their complaints process." 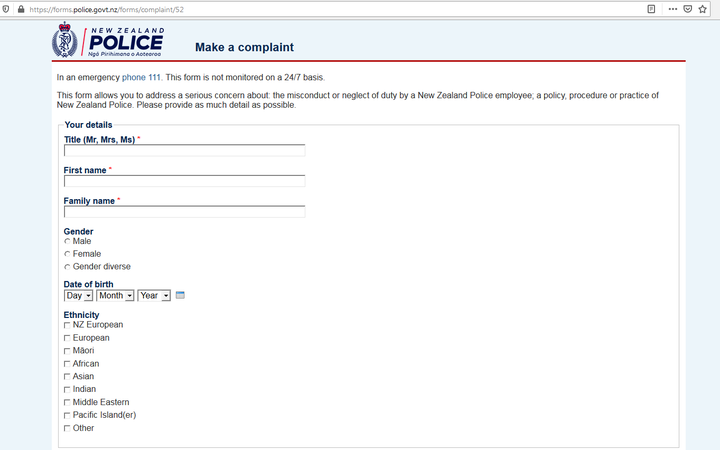 In a statement, police said it was improved access to its online complaints processes that had led to the rise in complaints. Photo: Screenshot / police.govt.nz

Judge Doherty said complaints made in districts, sometimes in person, were not being forwarded through to the authority, and instead complainants were being told to go direct to the IPCA.

He said that had been rectified, and police were now lodging the complaint and sending it through.

In the 2018-19 year, the IPCA completed 64 independent investigations, up on the previous year.

It published 35 reports, up from 22, and reviewed about 250 police investigations.

Judge Doherty said about 700 people had their cases resolved through mediation between them and the police, overseen by the authority.

The IPCA has sought extra funding to increase staffing levels and deal with the increased number of complaints.