Swimmers are at least two days away from being able to safely swim in Wellington harbour near the point where sewage flooded into it. 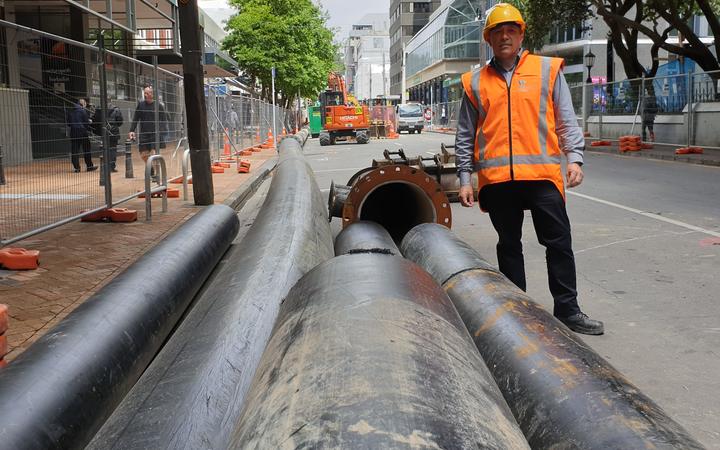 Thousands of litres of sewage have spilled into the harbour since a sewer main collapsed on Friday.

It has now been fixed temporarily - faster than expected - with a permanent repair expected by the end of February.

"Provisionally we've got a clear result so we're just waiting for that to be confirmed," McKibbin said of daily water testing at the harbour.

"When we have the three clear tests we'll be able to work with mana whenua and lift the rāhui."

Sewage has not flowed in to the harbour for the last 36 hours or so, after an 1890s pipe was pressed into service to clear the flow.

Now, however, a temporary 50cm-diameter pipe snaking above ground is carrying 200 litres several hundred metres along Willis Street to the permanent mains on Ghuznee Street.

This fix was being commissioned "gingerly", McKibbin said, the biggest job he had faced in 25 years in the water business in Wellington.

Operations engineer Sean de Roo said they had staff "rolling on and off to keep an eye on it".

"We've finally got into the sweet spot, we've got it to a safe place," he said.

Those who did a 12-hour shift overnight had been taxied home by fresh workers early today.

For many of the 40 workers, the fix - well before when it was expected on Thursday - means they might get to spend time at home for Christmas after all.

"I can go home and spend time with my kids for tomorrow," said de Roo.

Fulton Hogan worker Weti Noanoa was not so sure.

"There's a lot of things still needs to be done here," he said.

The temporary repairs have cost hundreds of thousands of dollars. The collapse occurred in an old sewer chamber 20m below the street, which was very hard to access.

Wellington Water would now re-inspect a similar old sewer chamber nearby in the central city that had much easier access.

It had been recently checked and was okay but they would recheck to be sure, McKibbin said.

Wellington mayor Andy Foster said this was not a sign that network maintenance had been neglected.

"It is ageing but at the same time we're constantly replacing it," Foster said, noting the city council spent $180m a year on water and wastewater.

"We do have a plan to do more as those pipes get to the end of their life, but you don't replace pipe before the end of your life.'

The council has been struggling with water project cost blowouts recently, and has had to defer some projects.

The sewer collapse would help the council ask the right questions of Wellington Water, the mayor said.

"I think there's things we can learn from it, particularly around the frequency of inspection of some of the critical pipes."

McKibbin said they would re-evaluate their maintenance programme but he believed the settings were about right.