A mass gathering of sharks in the shallows of Great Barrier Island has locals on the lookout, while others steer clear of the water. 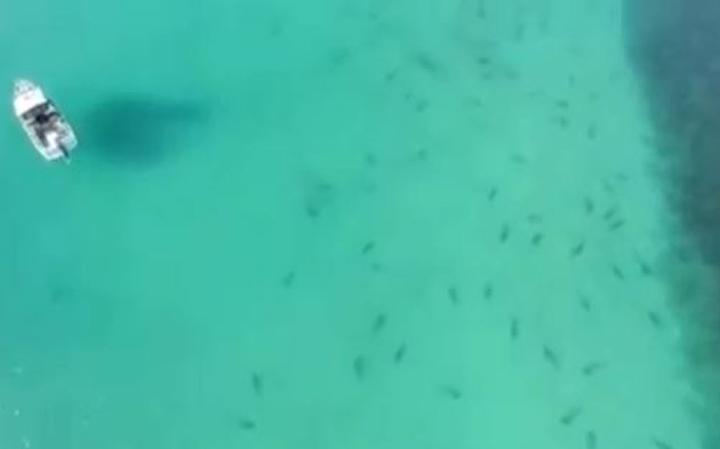 Hundreds of small sharks have been spotted swimming in schools through the Tryphena Harbour.

Local Steve Crawley has been keeping watch from his store into the crystal clear water.

"You can see a lot of sharks swimming around the place. We had hammerheads a couple of weeks ago, it seems to be more schooling sharks now. There's hundreds of them there... just swimming around," he said.

"They're coming right up close to the sea wall, right up to the edge of the beach in the evening. We had people in there swimming with them yesterday.

"They're just little sharks about two or three-foot-long. They're only young ones, they're pretty harmless. We don't even know why they're here. I don't think they're old enough for mating."

He told Summer Report that according to some of the locals it had happened in the past. "I don't know if it is something that happens every year or every now and again."

"It's not unprecedented. I can think of large gatherings that have been seen around Great Barrier in the past and around Tauranga."

Shark scientist Riley Elliot agreed and said humans are likely to see more of these kinds of gatherings thanks to technology.

"It is a natural occurrence that happens every year, we just happen to be out in droves during this period also, for summer holidays, and with the advent of drones etc, we observe such spectacles more in modern times."

Based on the footage he's seen Duffy thought they're likely to be school sharks, a species that grows to around 1.8 metres long and isn't really a bother to humans.

Swimmers should exit the calmly if they run into an unidentified shark, but Duffy thinks the ones spotted near Great Barrier would more scared of humans than we are of them.

"You could probably get in the water and struggle to see them because they would avoid you," he said

Elliot stressed it's probably not a good idea to swim with them though as the sharks are still wild animals.

"They are there for a reason, likely avoiding predators and feeling safe; having people intrude on that would likely disrupt such a requirement for these young sharks."

Duffy also pointed out it might be worth keeping an eye out for any other visitors. He said school shark is often eaten by larger sharks and may just attract a couple looking for a snack.