An investigation has been launched into the death of a great white shark after witnesses reported it was kicked and dragged out of the water while others tried to rescue it. 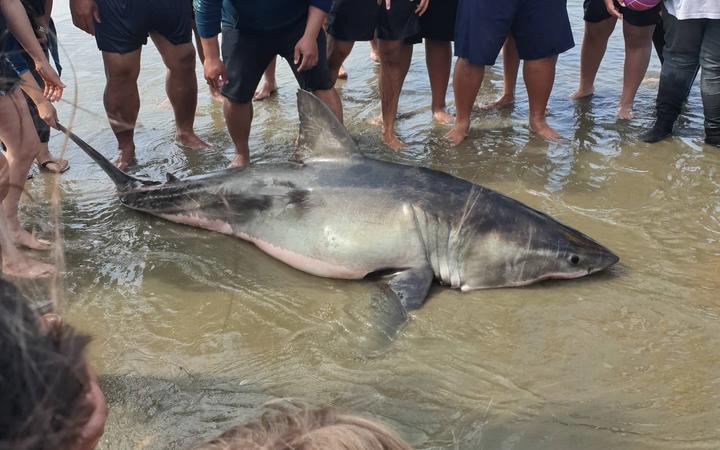 The juvenile shark was caught in a fishing net off Orewa Beach in northern Auckland yesterday and died despite bystanders' attempts to help.

Men who were fishing in the surf caught the 2.75m great white in a net and hauled it to shore.

A woman who was at the beach told RNZ that the group seemed intent on keeping the shark and acted in an intimidating way towards those who wanted to return it to the water.

She asked not to be identified.

"They were touching it, rolling it [and] the big fat guy did kick it," she said.

"It was just disrespectful, and it was probably, like, intimidation as well. And that was the same guy that asked for someone to go get a knife."

But the woman's husband and surf lifeguards managed to pull the shark into water deep enough for it to float.

"When my husband and the lifeguards pulled it out, they were just taunting them and kicking water at them and just basically trying to get them not to take it out."

When the shark didn't swim off, she says the men who caught it dragged it back to shore after a minute or two.

She said she wished they'd given it more time to recuperate - even though it was probably too late to save it.

"My husband reckoned it did try and clear a bit of sand out of its gills, but it wasn't given enough time because they basically just went in and dragged it back."

The shark is now in a freezer at Massey University while the Department of Conversation liaise with mana whenua to decide what will happen with the cadaver.

DOC marine species advisor Clinton Duffy said the shark was probably five or six years old and it would have been another 10 years or so before it reached maturity.

"In this case it's pretty obvious why the animal died - it's got pretty obvious net entanglement marks all over it, so I think the cause of death is no real mystery," he said.

"Most sharks have to swim continuously to push water over their gills so they can breathe, particularly active species like great whites, and they will die really quickly once they're restrained."

Deliberately killing a great white shark is an offence punishable by up to two years' imprisonment or a $250,000 fine.

Police say they're working with DOC on an investigation into the incident. Anyone who saw what happened should get in touch with DOC.