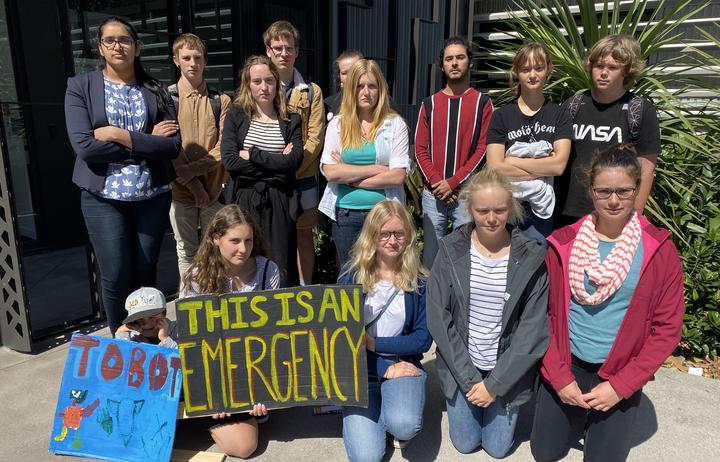 The council chambers were packed with about 40 members of the public, young and old, as Tairawhiti Youth Environment group delivered a petition calling for the council to make a climate emergency declaration.

The calls follows the council's decision in June not to make a climate crisis declaration.

One man stormed out while councillors debated the relevance to Tairawhiti of declaring a climate emergency.

"I can't listen to this stuff any more."

After the meeting, Tairawhiti Youth Environment member Haylee Law shed tears as she vowed to continuing fighting for recognition from the district's leaders that climate change was an emergency requiring urgent action.

The group would debrief over the summer break and continue the fight anew next year, with further school strikes not ruled out.

Haylee and fellow Gisborne Girls' High School student Sumita Singh, both 16, presented the petition to councillors with a plea for them to respect the wishes of the 1200 people who signed it.

Sumita said carbon neutrality by 2050 was simply not enough to tackle global warming. A significant reduction in greenhouse gas emissions was needed.

Echoing climate activist Greta Thunberg, Haylee said the earth was at the beginning of a mass extinction, with the effects of climate change already robbing people of their homes in the Pacific Islands.

"It is now time to step up and walk the walk," Haylee said.

"A failure to do so will be a failure of this council."

But confusion reigned among councillors over exactly what they were voting on in response to the petition.

A report to councillors recommended they "formally acknowledge that climate change is a significant issue for Tairawhiti and should be considered in all council decision-making".

The report noted that declaring a "meaningful" climate emergency would require the council to reprioritise its spending, which it could do in the 2021-31 Long Term Plan.

Councillor Kerry Worsnop was concerned a climate emergency declaration would restrict what the council could spend money on.

She asked Haylee and Sumita how they would reprioritise spending if they were on the council.

"We can't make that decision for you ... but you will need to sacrifice something," Haylee said.

Chief executive Nedine Thatcher Swann explained the recommendation was for the council to just acknowledge the need to reprioritise spending if it declared a climate emergency.

Councillor Meredith Akuhata-Brown praised the students for participating in democracy and agreed "hand on heart" there was a climate emergency and the council should declare one.

Councillor Shannon Dowsing said he was surprised a climate change declaration was not the first recommendation to the council, given the number of elected members who committed to such a declaration while on the campaign trail for this year's local body elections.

The council was spending more than $30 million upgrading the Waipaoa stopbanks to cope with the effects of climate change.

"Why are we spending that and not trying to address the root cause?" Dowsing said.

He and Akuhata-Brown were two of three councillors who voted against a recommendation that did not include a climate emergency declaration.

Matakaoa-Waiapu ward councillor Bill Burdett also voted against it, citing the need to consult with his community.

But the recommendation was supported by all other councillors and Mayor Rehette Stoltz, who said since June, when the council first opted not to declare a climate emergency, it had been working on ways to address global warming.

These included tracking the council's greenhouse gas emissions, including those of its trading organisation, Gisborne Holdings Ltd.