Sightings of a tornado in East Waikato have been reported as a "wall of wind" hit the region, and monsoon-type rain has drenched the upper North Island.

Rain covered about 80 percent of the country this morning and continued for many regions, along with gales, into this evening.

In the South Island, flooding has closed State Highway 63 at Wairau Valley in Marlborough and it will remain closed overnight.

It is blocked off between the Branch River and Wairau River bridges.

The Transport Agency says motorists should use State Highway Six via Nelson instead.

Figures from the Marlborough District Council show the Wairau Valley had 51mm of rain this afternoon.

Between tonight and tomorrow morning, light snow can be expected at the summits of State Highway 7 at Lewis Pass and State Highway 73 at Arthur's Pass. However, MetService said little - if any - snow was expected to settle on the road.

On State Highway 73 through Porters Pass, snowshowers are expected to affect the road from tonight to early Wednesday morning. Between 2cm and 4cm of snow may settle on the road above 800m.

While most intense in the north, a band of rain spread down much of the country today and more is expected.

As he was on the phone to RNZ, a deluge of rain hit the West Auckland home of WeatherWatch head forecaster Philip Duncan.

"It is absolutely pouring down, like a tropical downpour," he said.

"This is the heaviest rain I've seen in Auckland in months - at least where I live - and that will be crossing over the city soon, so there could well be some surface flooding."

If you are heading home this afternoon, please remember to slow down, turn on your headlights and drive to the conditions as wet weather settles in. Take care #AklTraffic and get home safe. ^MF pic.twitter.com/jVS87Ff16z

There are also some strong gusty winds about, but Duncan expected the rain to be the main issue.

"This downpour is definitely going to track across much of Auckland this afternoon so there could be some flooding in any part of the city this afternoon and also Waikato, the Coromandel peninsula - really the whole upper North Island - as this low pressure system moves into the area."

It's been a drier than average year in 2019, and the past few months have been particularly dry, so thirsty crops and veggie gardens will be welcoming the sudden drenching.

"The rain coming in is definitely a good sign that going into summer there's a burst of pasture growth on the dairy farms and for those who grow our vegetables, so this is good news," Duncan said.

"But when it falls as heavily as it's falling now across Auckland this is definitely one to be aware of over the next couple of hours."

MetService said winds had reached up to 90km an hour this afternoon.

McGiven was sitting in her living room when the wild weather hit. 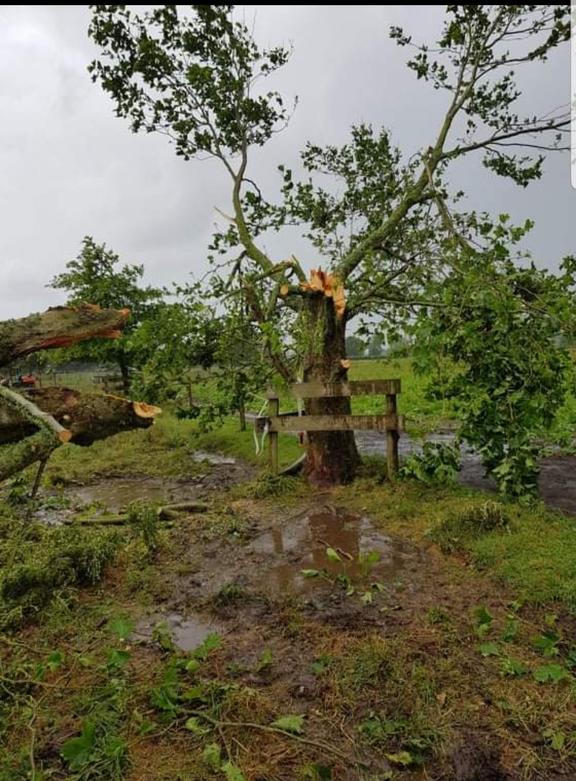 "It was just like this wall of wind just hit the house. A couple of panes of glass smashed in leaving glass everywhere. Out barbeque entertainment area is just demolished, we've got outdoor furniture that has ended up paddocks away and numerous trees are broken and down."

Everyone in the house at the time was unharmed but surprised, she said.

"It's one of those things, nothing you can do about it, you just gotta roll with it."

Steady rain is now coming through the broken windows that would take a lot of force to break, she said.

Strong wind has lifted the roof of an old cow shed in a nearby paddock, she said.

McGiven's husband Andrew is out clearly trees off fences and checking other damage at the property. He said clearing the trees could take several weeks.

"The actual event itself, by the time the wind got up and threw and picked everything up it would've been less than five minutes - it was pretty short and sharp. 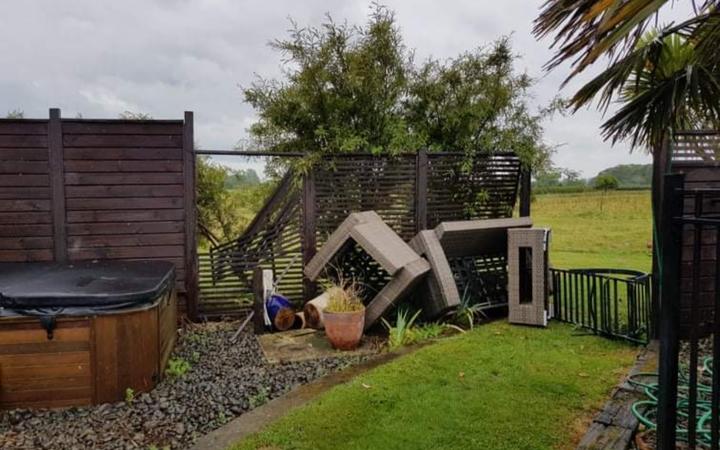 Fire and Emergency said it had not received any call outs.

Further south, two tourists have been rescued in the Tasman District being trapped on a river bank by heavy rain and rising water levels.

The Australian pair were winched to safety by helicopter after being cut off by a swollen river at the start of the Heaphy Track.

The Rescue Co-ordination Centre was alerted to the pair's plight about 4.30am when a locator beacon was activated on the Aorere River, where the father and son had been fishing.

Heavy rain warnings were in place for central and southern parts of New Zealand.

Mount Taranaki, Nelson and Northern Marlborough saw some the the worst of the rain, with between 130 and 150mm recorde

A heavy rain watch is in place for the Bay of Plenty, Gisborne, North Otago, Canterbury, Westland and Buller.

While there are just a few showers around Auckland this morning, MetService said periods of heavier rain later, along with a risk of thunderstorms.

Under overcast skies there are just a few showers around the #Auckland region at the moment, but periods of heavier rain are likely today from later this morning, along with a risk of thunderstorms https://t.co/7k3nmdWQwx ^PL pic.twitter.com/ZyqVEPn4DY

Gale warnings were in place around most of the country. Winds of 35 knots gusting 50 knots had been expected by evening.

"A low over the Tasman Sea moves across central New Zealand on Tuesday, bringing rain to many areas," MetService said.

"An associated front brings a period of heavy northerly rain to exposed regions from Buller to East Cape.

"Meanwhile, as the low approaches and crosses central New Zealand, a period of southeasterly rain is forecast for eastern parts of the South Island."

Meteorologist Peter Little said there were no major concerns with dry coastal areas absorbing most of the downpours.

He said the system was slow moving, which was allowing the rain to accumulate.

"It's been quite a slow-moving situation, we're in what we call a blocking pattern at the moment so rather than a weather system moving very quickly across the country we've had this one move very very slowly.

"That's what's allowed a lot of rain to fall in places like Nelson where it's been very exposed to the northerly airstream."

He said parts of Nelson and Marlborough experienced more than 100mm of rain overnight.

A Nelson City Council spokesperson said they were monitoring the situation but had had no problems so far.

Much needed rain ️ for the North Island is on tap over the next day or so.

However, some locations may see a bit too much rain. Thus, a risk for slips and localised flooding for those that see the heaviest rain. pic.twitter.com/YWJY1sXI5m

In Auckland, a large tree fell down outside Middlemore Hospital causing disruption.

Vector said it had crews on standby in case of any power outages.

One for you @WeatherWatchNZ
High tide and a Nor Easter on Tamaki Drive just now. Kayak time....‍♂️ pic.twitter.com/Ohu58B39bR

Meanwhile in Queenstown and Wānaka, sandbags at shoreline streets and buildings will be removed. They have been in place for almost a fortnight after Lakes Wakatipu and Wānaka threatened to flood the nearby buildings.

Queenstown Lakes District Council is also removing the waterfront concrete wave barriers and hopes to reopen roads and carparks by the end of the week.

Some tracks and trails remain closed. Another update on closures of parks, reserves and trails over the Christmas break is expected by the end of the week.