Passengers have disembarked at Sydney Harbour from Ovation of the Seas this morning after a 12-day trans-Tasman cruise. 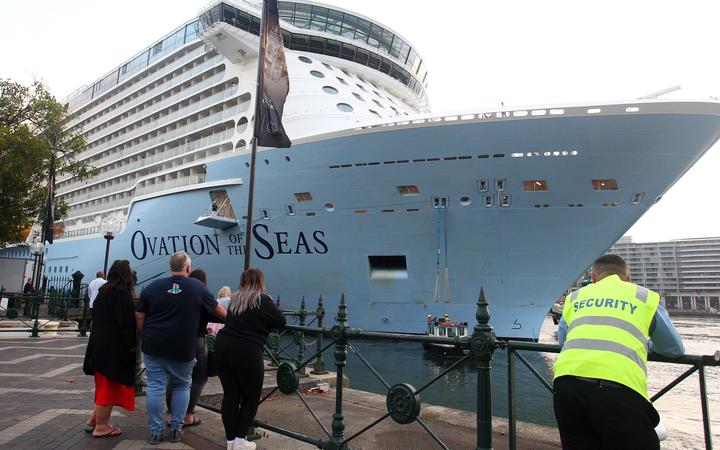 The Ovation of the Seas cruise ship returns to Sydney. Photo: Getty Images

Most of those killed or injured in the White Island eruption were part of organised day trips from the ship.

Passenger Max Sum said "the whole boat stopped" when the news of the eruption was announced.

"When the captain announced the news, the whole boat kept silent. The whole boat stopped. Unfortunately, I didn't hear any more information from the captain," Mr Sum said.

Asked about communication on the ship, Mr Sum said it "could have been better".

On hearing the news, his 11-year-old son Russell said: "I thought it was fake news. I was like that can't be true."

Tourist Jennifer Highfield from Michigan in the United States is on an antipodean holiday and said she was grieving for her fellow passengers and the families affected.

"Those poor people, I just feel so terrible for them. I am a nurse so I know how long it is going to be for their recovery," she said.

Highfield said the White Island tour was on her radar.

"That tour was our second choice if we did not go on the one we ended up doing. I just feel so sorry for them," she said.

"The ship constantly gave us information and counselling. But it would have been helpful to have free Wi-Fi to keep in touch with family and friends who were concerned. I had a package covering internet, but I know there was a lot of people on board who did not." she said.

"I felt a little bit guilty having fun when such a terrible thing happened. The captain was wonderful, we could tell it was heartbreaking for him personally. Even coming in today I felt a bit emotional.

"I think it will probably hit people later on as well, they were trying to get through the cruise and think what actually happened and how bad it was. There were those that lost their lives but there are also those in hospital," passenger Kylie Peat, from Brisbane, said.

One of the passengers said he briefly met one of the women killed in the eruption during the cruise.

"It was really sad to hear. We became friends on the ship, not close friends. She was pretty nice, got along with everyone. Definitely stirred up a bit of trouble when everyone found out," he said.