A preliminary safety report has found that a monsoon bucket hitting the tail rotor of a helicopter was the likely reason a pilot almost lost control of the aircraft while fighting the Tasman fires. 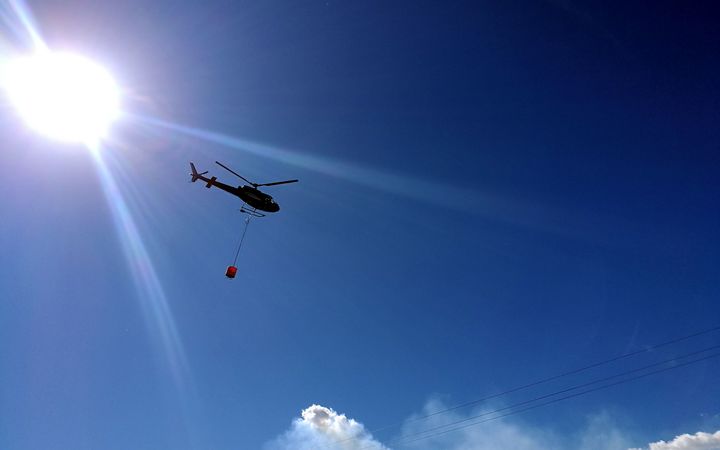 A helicopter with a monsoon bucket heads out to tackle the fire. Photo: RNZ / Logan Church

Experienced Nelson helicopter pilot Bill Reid was injured after the helicopter suffered what was described as a hard landing while helping to fight the February wildfires.

A preliminary report issued by The New Zealand Helicopter Association and the Civil Aviation Authority said the helicopter was engaged in firefighting duties when the pilot noticed a sudden yaw to the left followed by another to the right. This was followed by a sudden pitch up.

The pilot immediately jettisoned the monsoon bucket, and while he had little directional control of the aircraft he was able to control the rate of descent down to the ground.

An investigation found the most likely scenario was that the top ring through which the monsoon bucket was attached to the helicopter, partially collapsed.

The report said this effectively turned the bucket into a sack, and once the water was released and the helicopter gained forward speed, the bucket would have been dragged upward into the tail boom and tail rotor.

The report states: "It is probable that the top ring in the bucket partially collapsed when the PIC (pilot in command) was on his last dip fill, essentially turning the bucket into a sack without the rigid top ring in place.

"Once the pilot released the water from the bucket and gained forward speed while travelling back down the valley the bucket would have experienced significant aerodynamic drag which moved it upward into the tail boom and tail rotor."

The bucket was a Cloudburst CB1000MF, which the investigation highlighted a possible risk factor when operating the older style of its type, with a collapsible top ring that was secured by Velcro.

"Partial collapse of the ring, or if the ring comes away from the Velcro, could cause an empty bucket to 'fly' erratically in flight and move dangerously close to the tail," the report said.

It said the operator had contacted the manufacturer.

Reid told RNZ he would prefer to comment once the official Transport Accident Investigation Commission report was released.