Five people - including a Whakatane tour guide - are dead after the eruption at Whakaari / White Island. 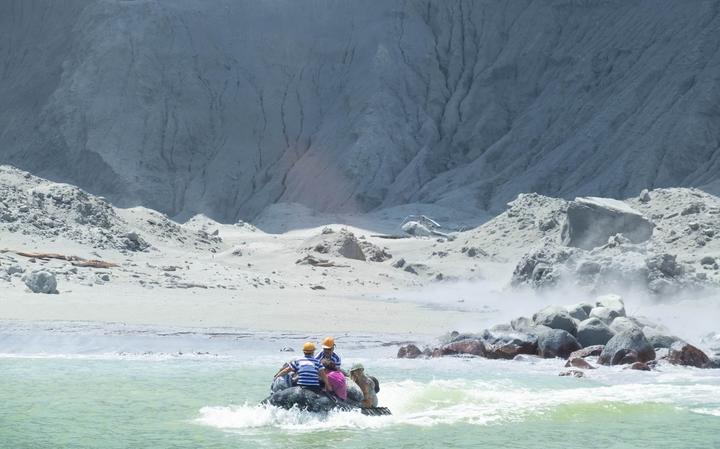 Deputy Commissioner John Tims confirmed the five deaths about 9pm and said it was too early to confirm nationalities but both Kiwis and overseas tourists were involved.

He was part of a well-known family in the town and was a very experienced tour guide on the island, Mr Bonne said.

"The community here is in mourning.

"He was a bright young man, full of life ... he was a diver, he loved fishing, he loved life."

Mr Tims earlier told media the island, about 48km east of the mainland in the Bay of Plenty, was unstable and the physical environment was deemed too unsafe for police to return to and police did not know if there were still people alive there tonight.

Police earlier said 23 people had been evacuated from the island and the nearby area - including the five who died - and up to 27 were still believed on the island.

Up to 50 people were thought to have been on or around the island at the time of the volcanic event at 2.11pm, lower than earlier estimates of about 100.

GNS Science said the event lasted only minutes, with rocks hurled into the air and "ground-hugging flows" being sent across the crater floor to the sea, about a kilometre away from the vent.

About 6.30pm, Mr Tims said 23 people had so far been removed from the volcano site. He could not release any details on the deceased.

The Defence Force also sent several aircraft and personnel to assist with the emergency response.

An NZDF spokesperson confirmed an airforce P-3K2 Orion aircraft has flown over the island carrying out surveillance over the area, while two NH90 helicopters headed to Whakatāne to assist emergency services.

The Navy ship HMNZS Wellington was also on its way to Whakatāne from Auckland to offer support.

NZDF said it would be working under the direction of NZ Police.

In the Bay of Plenty, police, ambulances, fire vehicles, regional council and helicopters congregated in Whakatāne as the injured were collected, treated and brought to regional hospitals.

St John's Director of Operations Norma Lane confirmed at least 20 people were injured. It is understood at least seven were in a critical condition.

"We currently have officers in the air so we are using Whakatāne airport as a staging post ... we have up to seven helicopters that are based there and they are going out to the island," she told Checkpoint.

"We're very lucky that we have our medical director - our national medical director Dr Tony Smith - on one of the helicopters with other experienced paramedics who are assessing casualties on the island and then co-ordinating the evacuation and those are in the main being flown directly to receiving hospitals in the region.

"The number of casualties are yet to be determined but they are in the numbers of 20-plus, with various levels of seriousness. Obviously burns are the main issue."

Prime Minister Jacinda Ardern told a press conference she would be travelling to the scene this evening and get a full briefing as search and rescue teams prepared a plan of action.

Prime Minister of Australia Scott Morrison sent his condolences to the victims this evening and tweeted confirmation that Australian visitors had been caught up in the tragedy.

A terrible tragedy is unfolding in NZ after the volcano eruption on Whakaari/White Island. Australians have been caught up in this terrible event and we are working to determine their wellbeing.

Police this evening said they would not comment on Australian reports that there are 24 Australians involved.

Earlier, less than 15 minutes after the eruption, staff from the White Island Tour operators rushed to the island in a small dingy acting as first responders to the emergency. They were pictured taking took tourists off the island about 2.25pm.

However, questions will be asked over why tours were allowed to continue as the island's volcanic activity increased in recent weeks, and whether current civil defence arrangements may need to be revised.

Monitoring parameters were alert elevated to a level 2 Volcanic Alert six days ago. That was raised to level 4 after today's incident and was been been reduced to level 3 this evening.

In August 2017 a Memorandum of Understanding was signed by Associate Minister of Local Government, Jacqui Dean, and the Bay of Plenty Civil Defence Emergency Management Group. It set out the direction and responsibilities of the group in relation to the active volcano, including readiness and response work.

Whakaari / White Island, as an offshore island, does not come under the authority of any city or district council, which usually have these responsibilities under the Civil Defence Emergency Management Act.

Former Tauranga Mayor, Greg Brownless, who was BOPCDEM Group Joint Committee chairperson at the time, said the group would continue to work with those who visited the island, in the same way a local authority would usually meet with the community, to ensure the readiness and response planning was adequate for the risks the island posed.

This evening, the New Zealand Cruise Association expressed concern over passengers from the Ovation of the Seas, a cruise ship visiting Tauranga. It is understood some of those passengers were visiting White Island during the time of the eruption.

Whakatāne resident Don Richards watched from his Muriwai Drive home as two boats carrying survivors came into shore at speed, some stretchered to ambulances in their underwear.

"Some of the people coming off the boats were in their underwear ... they weren't wearing clothes. There were women just wearing bras and it didn't look right. I couldn't understand what I was looking at."

Police are continuing to work with National Emergency Management Agency to co-ordinate the search and rescue operation that began this afternoon.

St John is working with the Royal New Zealand Coast Guard, Ambulance Air Operators and District Health Boards, in a co-ordinated effort to ensure survivors are transported to hospital as quickly as possible once located.

GNS Science's Dr Ken Gledhill said it looked like it has quietened down, but he could not be certain there wouldn't be another eruption in the next 24 hours.