Academics and the vaping industry say the government urgently needs to bring in e-cigarette regulations. The government says the process is taking longer than it would like but it has to get it right. 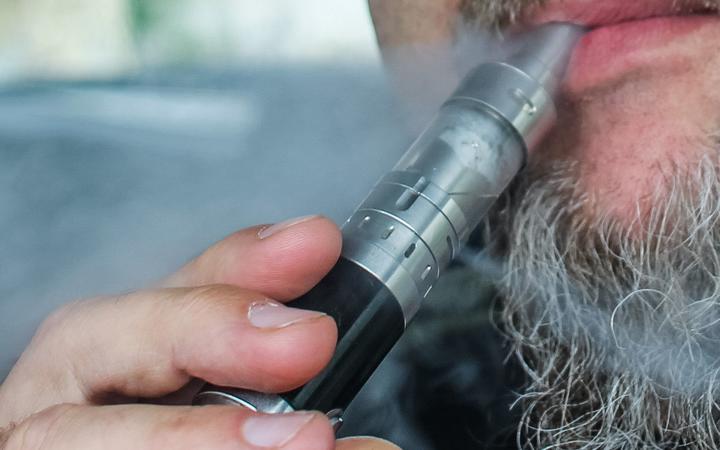 It will be at least another 10 years before it becomes clear what the health risks of e-cigarettes are, an academic says. Photo: AFP

"When there is such uncertain evidence you need to take a really cautious approach," she said. "Potentially these products are creating harmful impacts and nobody's really going to know the long-term impacts for another 10 years," Dr Burrowes said.

"I think it's important to really be more cautious and try and try and tighten up the sort of products that are on the market.

"At the moment there's no way of knowing what chemicals are within the e-liquids and I think these products have become so widespread in the community - there's a vape shop on every corner almost.

"I think it's really vital that this moves forward very quickly."

It would be at least another 10 years before it became clear what the health risks were, she added.

Common smoking-related diseases such as lung cancer and chronic obstructive pulmonary disease only occurred in older adults, and younger people might be unaware of the risks.

"I don't really have a feel for whether people realise that they are potentially dangerous," she said.

"We've found more than 50 chemicals in the aerosols we've analysed - we've found heavy metals, including lead, small amounts of arsenic and the problem is, a lot of the flavourings added - while they're thought to be safe for ingestion, nobody knows the effect that they could have on the lungs."

Canterbury University adjunct professor Murray Laugesen, who published a New Zealand report on toxins in e-cigarettes in 2015, said vaping may be safer than combustible cigarettes - but without regulations there was no mechanism for testing what was on the market.

Dr Laugesen said that should be given more priority.

"What is lacking today is an up-to-date assessment of what's on sale, and what's in these e-cigarettes. And the easiest way for doing that is to introduce legislation which requires people to put forward their own product to have it vetted by the government," Dr Laugesen said.

"And until that happens, we don't know where we are."

Policy options for regulation were first put out for submission by the Ministry of Health in 2016.

Last spring the Associate Minister of Health Jenny Salesa said legislation, including limiting vape product retail displays in a similar way to how cigarettes are sold, would be introduced this year.

The Vaping Alliance said it had expected changes last November.

"We've been screaming out for for regulation for a number of years," its president, QJ Satchell, said.

"These products have been heavily tested from all angles, and we know hands down that conservatively they're 95 percent less harmful and in fact the Public Health England have even more recently increased that number to be closer towards 98 per cent safer than a combustible cigarette.

"We're really right on the cusp of this world-changing product and we can affect so many lives in so many ways, and were screaming out saying please let's put some sound sensible regulation in place, and we can become the world leaders in smoking cessation again, like we were 10 years ago."

Because of how contentious the subject has become, the government may be tempted to release details of the Bill just before Christmas, he said.

Government wants to 'get this legislation right'

In a statement, Jenny Salesa said amending the Smoke-free Environments Act 1990 to cover vaping and vape products was no small task.

"This is a detailed, technical bill," she said.

"It is taking time to work through the details so we can have a future-proof framework ready to present to Parliament.

"This process is taking longer than I'd like, but it is important we get this legislation right. I continue to work towards bringing a bill to the House as soon as is practically possible."

The government wanted to ensure vaping was available for smokers who wished to quit, but not marketed or sold to children and young people, she said.