A food fight has broken out on the streets of Auckland between vegans and meat eaters who are each vying to display their campaign messages on road signs before they're sabotaged by their opponents or painted over by the council. 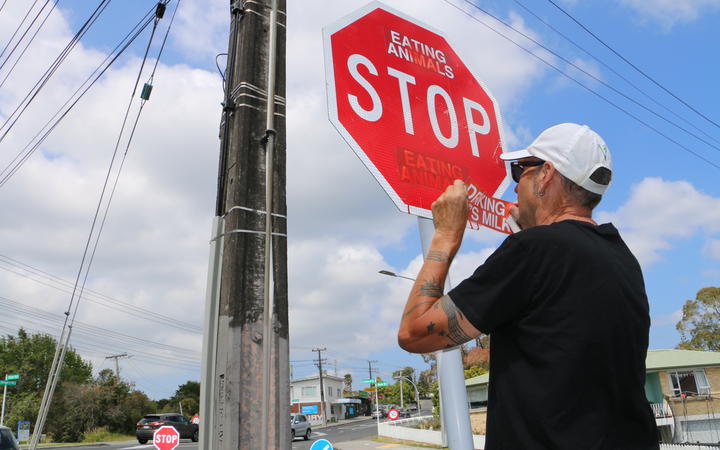 Vegan activist Deno Stock replaces an old sticker that's been painted over with a fresh one. Photo: RNZ / Matthew Theuniseen

A vegan activist group called the Gummy Bears are placing stickers below STOP signs so that they read "STOP eating animals".

The carnivores have countered with messages of their own, including: "STOP eating animals ... without barbecue sauce".

Vegan activist Deno Stock is one of the main organisers of the campaign trying to win over the hearts and minds of the meat-loving public.

"It's a pretty big ask - too right it is," he said. "We've all been brainwashed from babies. I was too - I used to eat meat three times a day like most people - until I actually found out what happened for that meat to be on my plate.

"When you actually tell someone that what they thought was right for all their life [is wrong] ... they get up in arms. And I can understand that."

Most animal rights activists use the cover of darkness to put up their slogans, but Mr Stock has no issue moseying down the streets of Glen Eden in his "vegan" emblazoned t-shirt, carrying a step ladder and a handful of anti-meat stickers, in search of stop signs.

His various campaigns are starting to take up more time than his gardening business.

But with organisations like the United Nations' Environment Programme saying using animals for food is bringing Earth to the verge of catastrophe, he's got no plans of slowing down - despite being labelled a militant.

"If you want to give us a name I suppose you could call us that but I think those people who do those things to animals are far more disgusting than what we're doing," he said. 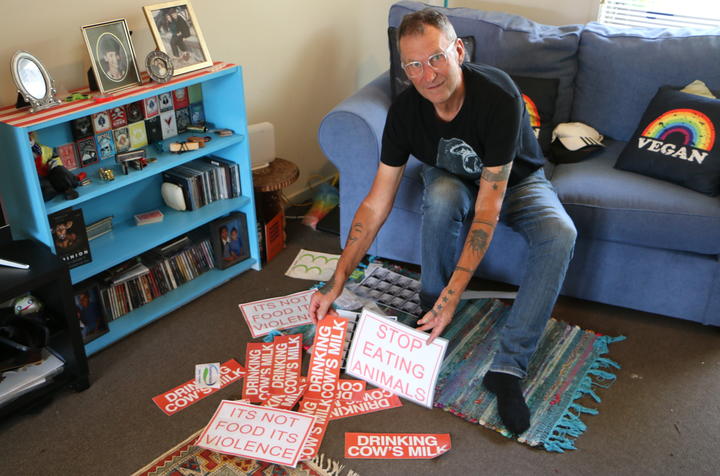 Activist Deno Stock is one of the main organisers of a vegan campaign trying to get people to move away from animal-based diets. Photo: RNZ / Matthew Theuniseen

Mr Stock has also put stickers on packs of meat in supermarkets, showing chickens below the caption, "Would you kill her yourself?"

However, the actions of Mr Stock and the Gummy Bears don't represent those of all the country's vegans or animal rights activists, some of whom have called them vandalism.

"There's been heaps of hate mail and everything from people who are totally against it," he said.

"The usual things like, 'You guys shouldn't be doing this; you've got no right to step into a supermarket and stop people buying their products; you're trying to change our diet', [and] threats."

Although Mr Stock said he saw a taxi driver spray-painting over a "STOP eating meat" sign, there doesn't appear to be any kind of organised group opposing the Gummy Bears' actions.

RNZ contacted two-time sausage of the year winner Glenn McKendry from Westmere Butchery to get his take on the burgeoning conflict.

"The vegans have their opinions and their beliefs [but] at the end of the day everyone's an individual and they should be allowed to decide for themselves," he said.

"Being told that you shouldn't eat meat by a vegan is not right but other than that, it's their belief, so let them believe."

Mr McKendry said a happy medium could be found between the two factions - but he was in no doubt that meat was here to stay.