The man on trial over the death of British backpacker Grace Millane has been found guilty of murder.

The 27-year-old stood motionless in the dock as the unanimous verdict was read out to the court.

Ms Millane's parents, who have attended the entire trial, clutched one another and cried in the public gallery.

Some of the seven women and five men on the jury also cried as Justice Moore thanked them for their service.

It took them five hours to deliver the result that brought the three-week murder trial in the High Court at Auckland to an end.

The man, who has continued name suppression, denied strangling Ms Millane in his apartment after they met for a Tinder date in Auckland's CBD on 1 December last year.

It was the eve of her 22nd birthday but by the time it rolled around, birthday messages from her friends and family went unanswered.

She was lying dead in the man's CityLife apartment and would remain there as he bought a suitcase to hide her body in, cleaned his apartment and went on another Tinder date in Ponsonby.

It wasn't until almost exactly 24 hours after she walked into the apartment, arm in arm with the man, that she was wheeled out of the building in a suitcase on a baggage carrier.

The man put her body in a shallow grave in the Waitākere Ranges the next morning and later led police to the burial scene.

He told authorities he'd choked Ms Millane with her consent and encouragement before waking up the following morning to find her dead on his floor.

The jury rejected this story and accepted the Crown's case that he intended to kill her or intended to cause an injury that may kill her when he put his hands on her throat.

Police found seven explicit photographs of Ms Millane's body on the man's phone that were timestamped before he Google searched 'Waitākere Ranges' and 'hottest fire'.

The Crown said this proved they were taken when she was dead and he had a motive to kill her; his own sexual gratification.

During this month's trial, the jury have seen these images and other photographs taken during the scene and post mortem examination.

Trial judge Justice Moore told the jury it had been a particularly difficult trial and discharged them from further service for the next seven years.

Speaking outside the courthouse today, Crown Solicitor for Auckland Brian Dickey, who led the prosecution's case, said he was delighted by the result for the family. 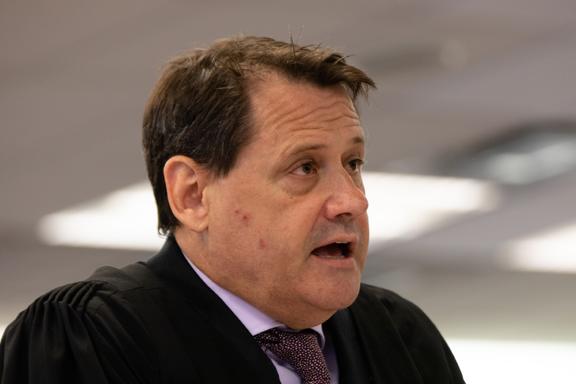 The man's lawyers Ian Brookie, Ron Mansfield and Claire Farquhar said they did not wish to comment as they left the courthouse.

Ms Millane's parents David and Gillian Millane spoke of their relief and grief after the verdict was delivered.

They had been supported in court by Detective Inspector Scott Beard, who led the investigation into their daughter's disappearance, Detective Senior Sergeant Greg Brand and family liason officer Detective Toni Jordan.

The man was remanded in custody to be sentenced in the High Court at Auckland on 21 February.