The Crown has closed its case against the man accused of murdering Grace Millane, telling the jury the defendant "eroticised" the death of the British backpacker. 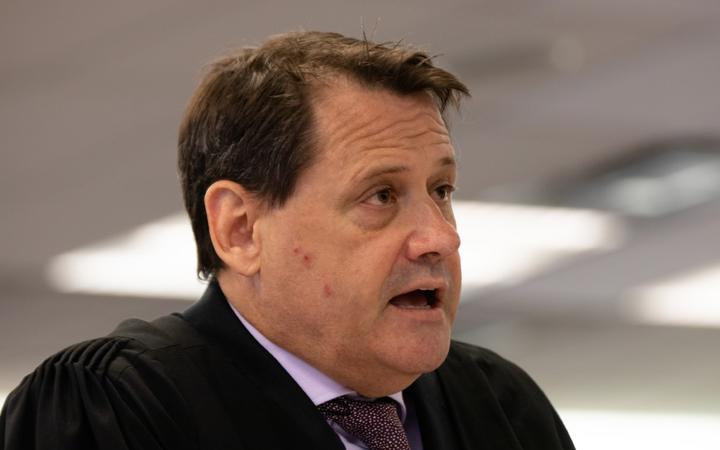 Crown prosecutor Brian Dickey at the High Court in Auckland makes a closing address in the trial of a man accused of murdering Grace Millane. Photo: RNZ / Dan Cook

The 27-year-old denies murdering Ms Millane, who died in his apartment after they met on a Tinder date on the night of 1 and 2 December last year.

His defence team says her death was accidental after they engaged in consensual choking during sex.

Crown Solicitor for Auckland Brian Dickey delivered the prosecution's closing address to the jury of seven women and five men this morning.

Ms Millane's parents grew visibly emotional as he held up seven explicit photographs the accused took of their daughter's body.

He told the jury they were "trophy" images.

"He has eroticised the death of British backpacker Grace Millane, which occurred under his hand-hold, and on her birthday."

He said the photographs showed the defence's proposition - that there was no motive in the case - was not true.

Mr Dickey said while CCTV cameras had captured the pair's movements before and after Ms Millane's death, only they knew what happened in the bedroom.

He told the jury they would rely on his actions after she died in determining his guilt.

"What he did next will tell you so much about what he had done before. That is just normal, rational, deductive reasoning."

Mr Dickey also told the jury the Crown did not have to prove murderous intent; that there was a second pathway of "reckless intent" to murder.

He also pointed out that by the defence expert's own opinion it would take five to 10 minutes to cause death by strangulation and during that period the victim would pass out and the person strangling them would have to continue.

"This defendant, this gentlemen in the back here, would have had to have her under his grip, suffocating her, strangling her, for a total of what would be approximately five to 10 minutes.

"At some point of which she lost consciousness and would have become under his hand-hold unconscious and limp and lifeless and he had to carry on and if that's not reckless murder in this country ladies and gentlemen, somebody will have to explain to me what is."

Mr Dickey told the jury it wasn't "sex play" or "restricted breath games"; telling the jury the photographs were powerful and inescapable evidence.

"This is holding a person's neck and throat and wrapping your hand or hands around it, however you did it, for an extended period of time - feeling their struggle - and she must have struggled for her life, and going limp and going into unconsciousness, and you carry on."

"That, ladies and gentlemen, is murder."

The defendant told police he and Ms Millane took intimate photographs of one another during sex - seven explicit photographs of the young woman were found on his device, but the police never recovered Ms Millane's phone.

By then, the items were buried under almost 10 metres of soil and searching the 70m by 100m area, would have been too resource-intensive, Mr Beard said.

Mr Dickey walked the jury through a number of internet searches on the man's phone starting with 'Waitākere Ranges' and 'hottest fire' around 1.30am on 1 December.

He reminded the jury the man also watched pornography before a break in activity which resumed in the early morning with more searches, including "time in London" and "are there flesh eating birds in New Zealand".

The jury heard Ms Millane's body was carried out of the hotel about 9.30pm on 2 December, after the man met another woman on a Tinder date in Ponsonby.

The man does not dispute burying the suitcase in a shallow grave in the Waitākere Ranges on 3 December.

Mr Dickey said it required a lack of dignity to contort the young woman's body in the suitcase and put it in the boot of a rental car for the night.

Mr Dickey said the man's actions were "calm, cold and in control" - far from the defence's proposition that the man was panicking.

"That is not fun sex with a bit of touchy, strangling stuff gone wrong; we are a very, very long way from that."

The prosecutor said the man had lied over and over again, spinning an elaborate web of fiction, because if he told the truth he would be admitting murder.

"He's still trying to avoid admitting he's caused her death. He knows what he did and he cannot speak that truth to the police."

Mr Dickey told the jury they had also heard a "chilling account" of a woman who claimed the man suffocated her during oral sex.

She told the court she feared for her life, thinking of her friends and family, as she struggled and then feigned unconciousness in an attempt to communicate to the man that she could not breathe.

When the man finally got off her he turned and asked in an accusing tone if she thought he had done it on purpose, she said.

Mr Dickey said the man had repeatedly told the woman she didn't like him, that he should kill himself and then faked cancer as yet another part of his "ludicrous fantasy".

"He has an interest in complete domination. This is a sexual interest; it's power and it's control. It's that risk of women's lives and it is terrifying and he knew what he was doing with this woman and he carried on.

"It's a very similar situation, you might think, that has probably occurred to Grace Millane, albeit a different mechanism. He didn't have his hands around [this woman's] throat but he was suffocating her nonetheless."

Mr Dickey said the woman had fought for her life and survived, while Ms Millane - also restrained - had not.