A forensic pathologist based in Florida has disputed a Crown expert's opinion on bruising to Grace Millane's body.

Ms Millane went missing from Auckland's CBD on the eve of her 22nd birthday last December.

Her family raised the alarm after she didn't respond to birthday messages and the accused, who has name suppression, led police to her body a week later.

It's not disputed that Ms Millane died in his apartment after they met on a Tinder date and that he later buried her body in a suitcase in the Waitākere Ranges.

It's the Crown's case the accused strangled her to death while the man's defence says Ms Millane's death was accidental after the man applied pressure to her neck with her consent and encouragement.

Last week the Crown called pathologist Dr Simon Stables, who completed a post mortem examination at the Auckland mortuary the day after her body was found.

It was his expert opinion a bruise to the left side of Ms Millane's neck, only identified through an internal examination, occurred when she was alive and would have required prolonged and forceful pressure.

Dr Stables identified her cause of death was pressure to the neck through manual strangulation and went further to say he'd only ever seen strangulation deaths in a sexual context when a person had used asphyxia apparatus on themselves.

He told the court he had reviewed Dr Stables' pathology report and it was his expert opinion there was evidence to support the theory Ms Millane was contributing factor .

He said the bruise to Ms Millane's neck was not located in deep tissue and an absence of further bruising or defensive injuries led him to believe Ms Millane's injuries were the result of consensual activity.

"In my expert opinion, if a nonconsensual act has taken place the victim is under attack or resisting attack they struggle.

"It's that action, the struggle or struggling, between an aggressor and a recipient, that gives rise to such injuries."

The court has heard the British backpacker had a blood alcohol level of 106 milligrams per 100 millilitres of blood; more than twice the legal driving limit in New Zealand.

Dr Stables had said Ms Millane's actual blood-alcohol level may have risen or lowered from what it was at her time of death due to decomposition but Dr Garavan told the court the level would have been "significantly higher".

He said it could require as little as a kilogram of weight to kill someone via pressure to the neck; saying it was "actually quite easy to do". 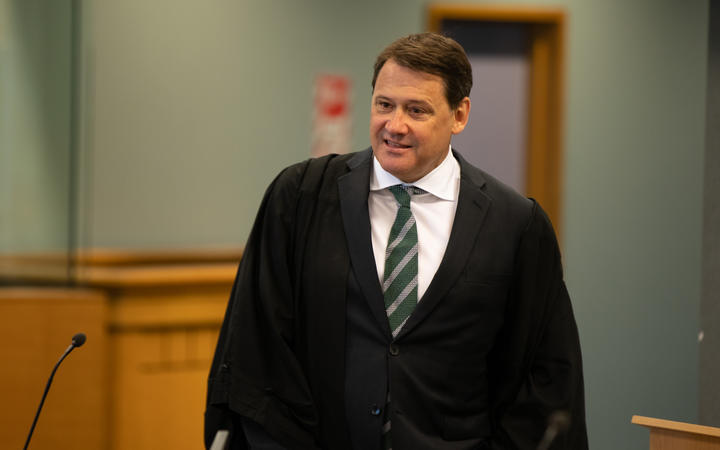 Crown prosecutor Brian Dickey asked Dr Garavan how he could comment on whether the pressure was consensual or not on the face of the pathology report.

Dr Garavan said the absence of other injuries gave him reason to pause.

"From my own experience, from nonconsensual or aggressive attacks, I personally have always seen haemorrhages on neck muscles ... without that, I would be very interested to find out if there was a broad ligature or some other mechanism used."

However, the pathologist conceded deep bruising to a neck wasn't always seen in manual strangulation cases.

He agreed with Mr Dickey's suggestion that a person being strangled could pass out in a matter of seconds and lose their ability to physically struggle.

Dr Garavan also agreed that if someone wasn't conscious and couldn't struggle they may not have deep bruising to their neck.

"If the victim is not in a position to defend themselves or fight in their position then everything you said is true," he told the prosecutor.

The trial before Justice Moore and a jury of seven women and five men is set down for the month but will finish earlier.