Stephen Colbert's latest series instalment on his trip to New Zealand has aired on The Late Show, featuring slapstick hilarity with former All Blacks players. 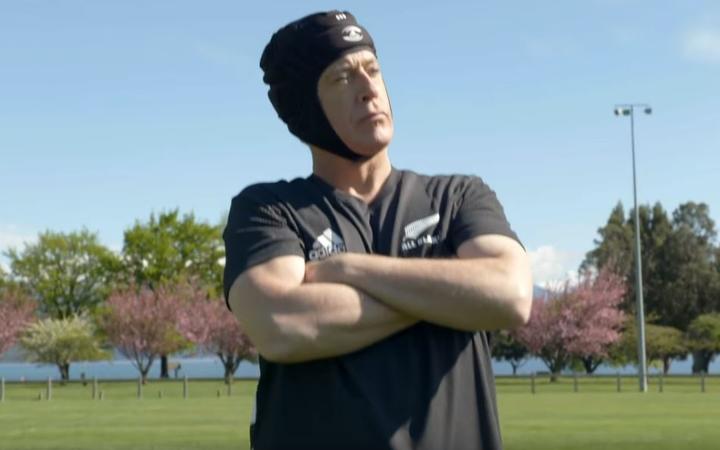 Stephen Colbert adorns the All-Blacks' jersey for his latest episode featuring his trip in to New Zealand. Photo: CBS/YouTube

The US funnyman and talkshow host this week asked "what is a rugby" and invited Sky broadcaster Laura McGoldrick, and former All Black stars Piri Weepu and DJ Forbes to help him find the answers.

His comedic performance on the rugby field got off to a fine start. After asking how the national squad got its name, he quipped: "We have a team in the United States called the 'all-whites'. It's the Republican Party."

The exchange set the tone for the rest of skit, with Colbert adorning an All-Blacks' jersey and protective gear, requesting of Wiri and Forbes, "teach me how to rugby".

The pair took Colbert's ensuing banter well, with Forbes being told "on behalf of all regular men" to "knock it off" when he confirmed his status as an underwear model.

Wiri looked a little sheepish when Colbert, displaying a look of bemusement, requested a flowchart or diagram after the rugby great listed team positions on the field.

The satire got painful, literally, after Colbert made an admirably committed tackle on a training prop, and seemed to be genuinely winded, demanding the heavy bag be red-carded.

Probably the highlight of the comedian's exchange with the boys was his "merit badge of pain" moment with DJ Forbes. Before charging forward in an attempt to tackle the man mountain, Colbert mocks: "You want to call your mummy before we do this, say 'bye bye mummy?"

He then predictably gets trailed across the field gripping Forbes' waist.

Other memorable moments include Colbert catching a line-out ball in slow-mo to Bill Medley and Jennifer Warnes' I've Had The Time Of My Life; his master kick at goal; his monumental effort moving the scrum machine an inch and his team talk with players, several of whom can't keep a straight face.

He muses near the end of the episode: "These men were no longer my team-mates, they were my brothers. Brothers with obvious repressed anger issues, who taught me their sport with grace, but sadly it was time to say goodbye."

It was the second episode in a series filmed during his time spent in New Zealand in October, following an invite by Prime Minister Jacinda Ardern. She had been a guest on his show in September last year after attending a UN meeting in New York.

The first episode featured the PM picking the talkshow host up from Auckland Airport and talking about everything from Ms Ardern's attempt to be cast in the Lord of the Rings trilogy, New Zealand politeness and lack of snakes, her engagement to Clarke Gayford, New Zealand elections, the Christchurch mosque attacks and gun law reform.

The Late Show with Stephen Colbert is the US number one show on late nights, with an average audience of 3.5 million people.

Tourism New Zealand said it expected the visit to generate an estimated $5 million worth of advertising revenue for the country.