The man accused of murdering Grace Millane admitted to police in his second interview the British backpacker was dead and that he had taken her body to the Waitākere Ranges. 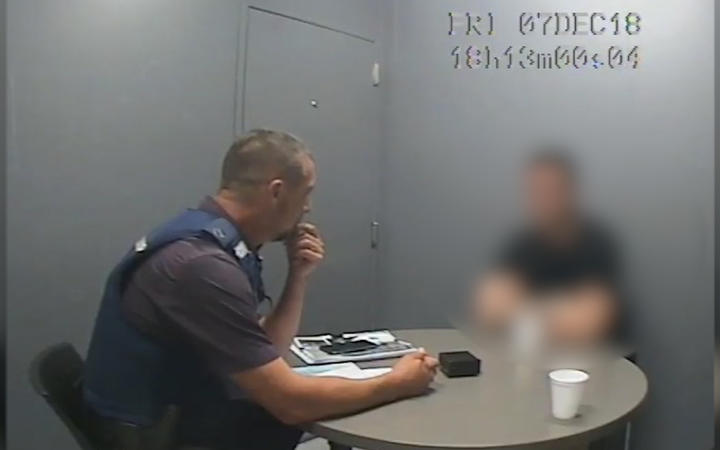 A blurred screengrab of the second police interview with the accused. Photo: Supplied

The jury in his High Court trial has watched the 8 December second police interview with Detective Sergeant Ewen Settle. The accused's lawyer Ian Brookie was also in the room.

Speaking with his arms crossed, the man told the police officer he was talking to Ms Millane on Tinder before adding her on Facebook messenger and organising to meet at SkyCity.

He said he met the young woman at the base of SkyCity, hugging her and kissing her on the cheek, and the pair went to Andy's Burgers and Bar to drink cocktails.

He said they were "both into each other" and drank, talked and kissed at several bars; ending up at The Bluestone Room where they drank heavily.

"We kept drinking there. I don't know what time we left there exactly. I was quite intoxicated at that point; so was Grace. I remember leaving Bluestone. The next thing I remember after that is being in the room with Grace.

"She started talking to me about 50 Shades of Grey ... she told me that there's a few things she likes doing and that she'd done with her ex partner. We started having sex.

The man said he stopped and asked Ms Millane if it was something she really wanted to do.

"She said, 'we're in the moment let's just go with it' and then I guess we had sex for a little bit and then we laid down and talked for a little while."

He said they later had sex again and Ms Millane "told me to hold her throat" and that they took intimate photos of each other.

The accused said afterwards he got into the shower, where he fell asleep.

"All I remember is falling asleep in the shower and then waking up."

The man said it was dark when he woke up and he crawled into bed to sleep.

"Initially I thought Grace had left and I was obviously asleep in bed. I woke up the next day and I saw that she was lying on the floor.

"I saw that she had blood coming from her nose. I screamed. I yelled out to her and I tried to move her to see if she was awake.

At this point in the interview the man tells Mr Settle, "I need to stop, I need to go", before they have a break.

When they return the man's voice is shaking as he says he was in shock and did not know what to do.

"I took a whole lot of tablets that I had because I realised that she was not alive and I just wanted to end it all, for me.

"I went downstairs and I was just all over the place. I didn't believe what had happened. I was just terrified and scared."

He said he went to The Warehouse at the Atrium where he bought a suitcase.

"I went back and at first I didn't know what to do. I just put the suitcase on the bed. I think I left again and came back in just not knowing what to do."

The accused said he could not stop thinking about how he and Ms Millane had such a great night.

"We were talking about catching up in London; going out for drinks on her birthday. So I was just at the point where I just wanted to end my own life. I'd had enough. I was finished.

"I remember putting Grace in the suitcase. I was just in shock the whole time. I couldn't put her in it because it just didn't seem right."

The man said he left his apartment again to get cleaning products.

"Then I remember coming back and I messaged a friend to catch up because I just didn't think it was real.

"I got back to the room and the whole time I was thinking she's to going wake up; she's going to be okay."

The court has heard from a woman who met the man on a Tinder date in Ponsonby that afternoon.

This woman told the court he spoke of lots of bodies going missing in the Waitākere Ranges and that he knew of a man who'd gone down for manslaughter after accidentally killing his girlfriend during rough sex.

"I went to Revelry and caught up with a mate. The whole time I just couldn't even get through the beer I was drinking.

"I eventually got through it and I bought another one but I was just not 100 percent there with [the woman] at all."

In the interview the man cried into his hands as he described returning to his CityLife apartment.

"All the time I just kept saying 'I'm sorry, I'm sorry'. And then I went downstairs and I grabbed the [baggage trolley] and I put the suitcase on top of [it] with an empty suitcase and my bag."

The defendant was leaning forward, his head in his hands, in the dock this morning as the video was played to the court.

He said he put Ms Millane's body in the back of a hire car and drove it to a nearby carpark where he prayed before returning to CityLife to sleep.

The man told the detective he got up at 5am the next day and picked up a shovel from ITM in Kumeu.

"I didn't know where to go. I ended up driving towards the Waitākeres and I remember pulling off after a reservoir."

The man said he attempted to take his own life.

"I didn't feel like I deserved to be around because of what happened."

He said he got the suitcase and put it into a hole in the ground before covering it.

Detective Settle asked him to go over what happened in his bedroom and the man said he was "new" to the type of sex portrayed in 50 Shades of Grey.

The trial before Justice Moore and a jury is set down for the month but may finish earlier as the Crown is expected to call its last witnesses today.