Warning: This story and related coverage of the trial contain graphic details that may be distressing.

A court has heard the man accused of murdering Grace Millane initially lied to the police about the last time he saw her. 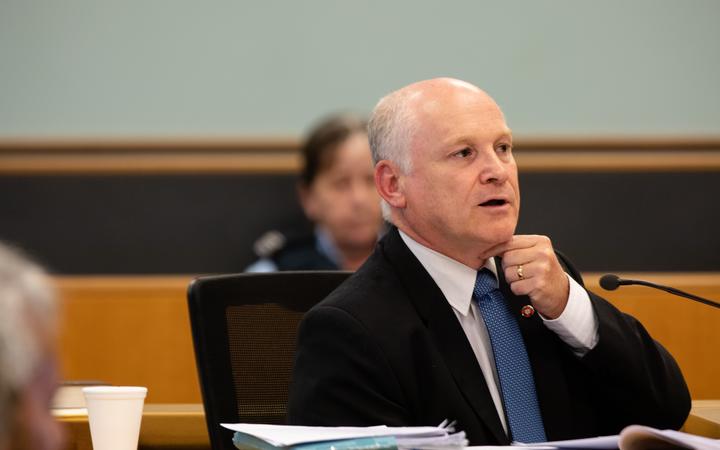 Dr Simon Stables was called as the Crown's 15th witness today in its case against the 27-year-old man who is on trial in the High Court at Auckland this month.

The accused denies murdering the British backpacker, who died in his apartment after meeting him on a Tinder date on the eve of her 22nd birthday last December.

Ms Millane's body was found in a suitcase in the Waitakere Ranges after her family raised the alarm when she didn't respond to birthday messages.

This morning Dr Stables told the jury he was called to Scenic Drive about 8am on 9 December by lead police investigator Detective Inspector Scott Beard.

Mr Beard sat in the public gallery with Ms Millane's family as they heard the pathologist's evidence, visibly struggling to hear what Dr Stables found during a post mortem examination.

Justice Moore warned the jurors about what they would see before post mortem photograph booklets were distributed to them.

"For obvious reasons, aspects of those photographs are disturbing. I'm just letting you know that and warning you about that.

"It's important that you attempt, if you can, to distance yourself from that and understand the context and purpose of this evidence."

Dr Stables told the jury he identified a number of bruises on Ms Millane's collar bone, upper shoulders, calve and thigh in an external examination that had the same colour and likely occurred around the time of her death.

He said there were no cuts or abrasions on the woman's body but decomposition made detection of such injuries more difficult.

The pathologist said of particular interest was an area of "significant bruising" to the left side of the woman's neck; found only through an internal examination that could identify deep bruising.

His expert opinion was that the bruise, which measured 3cm by 6cm, was "a real injury" and occurred when Ms Millane was still alive.

"All I can say is that it's been due to pressure on the neck and that pressure has been applied for long enough and with enough force for that bruising to occur."

Dr Stables said he couldn't specify the amount or timing of pressure required to cause the injury but said it wouldn't have been gentle.

"I don't think the bruising would occur with a gentle pressure on the neck; it has to be something a bit more forceful."

He said there were no other internal injuries or identified health conditions so the bruise was pivotal in determining how Ms Millane died.

"The cause of death was pressure on the neck. Pressure on the neck can be from a variety of things; manual strangulation, a ligature, a choker hold when you put an arm right around a neck or a forearm bar hold which is really just a forearm going straight across the neck. Either of those could cause this injury."

Dr Stables said a person would have to deprive someone's brain of oxygen through this mechanism for four-to-five minutes to kill them, but it may only take 10 seconds for someone to pass out.

He said only in "incredibly rare" cases did people die of an abnormal heart rhythm caused by pressure to the neck that is applied but not sustained for the required four to five minutes.

Dr Stables went further to say this couldn't be how Ms Millane died because of the existence of the bruise on her neck, which indicated a prolonged period of pressure.

The forensic pathologist told Crown prosecutor Brian Dickey he had seen only a few cases of strangulation deaths that had occurred in a sexual context.

"They're usually what we call auto-erotic asphyxia. So the person will put themselves in a position, usually with some other apparatus around their neck, for the point of their own sexual gratification, so there's no one else involved in it.

"In those cases there's usually some sort of escape mechanism so if the person feels like they're going to black out they can quickly get out of that position they're in."

It's not disputed by the defence that Ms Millane's cause of death was pressure applied to her neck.

Last week the accused's lawyer Ian Brookie told the jury the death was accidental after his client applied pressure to Ms Millane's neck during sex with her consent and encouragement.

This afternoon Mr Brookie asked Dr Stables if it was possible Ms Millane died of an abnormal heart rhythm, an unusual outcome that required a shorter period of pressure to the neck.

The forensic pathologist said the bruise to the young woman's neck indicated it wasn't a possibility in the case.

But when pressed by Mr Brookie, he conceded pressure could have been applied to form the bruise and then applied at a different angle to trigger an abnormal heart rhythm.

Mr Brookie also asked the doctor if he would expect to see "defensive injuries" on someone who had been choked without their consent.

"You can see scratches on the neck from where the victim is trying to forcibly remove the hands and it's the fingernails that scratch the skin," Dr Stables said.

In re-examining Dr Stables, Mr Dickey asked him if he would expect to see defensive injuries on someone whose arms had been restrained.

Dr Stables said he wouldn't and went on to say someone's arms could be pinned down by someone's free hand or their legs.

The court heard he could only offer his forensic opinion about the nature and probable cause of Ms Millane's bruising, not whether it had occurred a result of consensual or non-consensual rough sex.