Warning: This story and related coverage of the trial contain graphic details that may be distressing.

A name suppression breach meant a key Crown witness in the Grace Millane trial knew the man accused was the subject of a murder inquiry before she spoke with police, a court has been told. 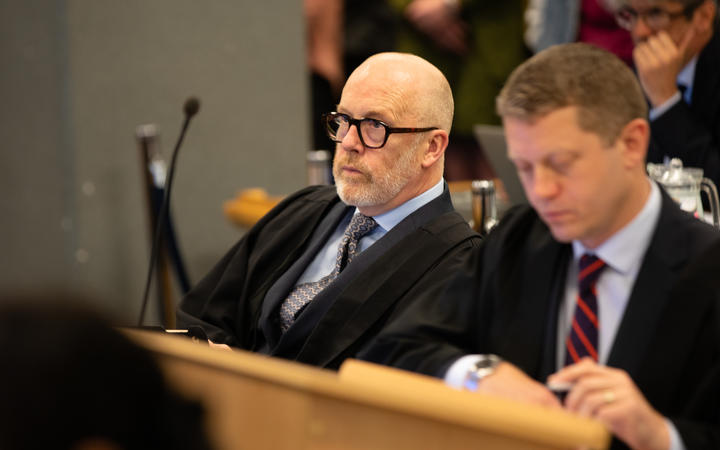 The 27-year-old defendant was granted interim name suppression at his first appearance in the Auckland District Court on 10 December.

His identity remains suppressed while a jury hear from witnesses called in his High Court trial at Auckland this month.

The man denies murdering Ms Millane, who was travelling the world on an OE, in his apartment on the night of 1 and 2 December last year.

It is not disputed that she died at the apartment or that the man put her body in a suitcase he later buried in the Waitākere Ranges a few days later.

His defence team, led by Ian Brookie, has told the jury Ms Millane's death was accidental after the pair had consensual rough sex.

Yesterday, the jury heard from a woman who claimed the accused suffocated her during oral sex they engaged in after connecting on Tinder.

She cried as she described thinking of her friends and family as she struggled under the man, thinking she was going to die.

The witness's account was scrutinised by one of the man's lawyers, Ron Mansfield, who pored over more than 700 messages the woman and the accused exchanged over a month-long period after the incident.

The woman denied accusations she was exaggerating details or lying about the incident altogether because she was embarrassed to have pursued a man now charged with murder.

She repeatedly told Mr Mansfield she did not know the man was being investigated by the police when they contacted her for information.

"I told them right from the beginning about my scary sexual experience with him before I knew about why he was being investigated," she said yesterday.

Mr Mansfield pursued this line of questioning this morning, reading an exerpt from her police statement aloud to the court.

"Initially when I heard about the murder and there was a name that was out there ... but I did not put two and two together," her statement read.

"It was only later when I saw a picture of the person who was alleged to be responsible that I knew [the accused] was..[the man I saw]; who I had been in contact with."

Mr Mansfield asked her again if she had connected the dots before she spoke to police investigating Ms Millane's disappearance.

Mr Mansfield: "It's pretty clear isn't it, that despite a name suppression order having been made on [my client's] initial arrest either you had done some inquiry through the internet or you had read something on the internet that provided his name."

Mr Mansfield: "And it also seems that you were able to locate a picture of the person said to be [my client] and was then able to link the guy you had met with the person who had been arrested and charged with murder."

Mr Mansfield: "Would you accept that?"

Mr Mansfield: "So you knew when you went to the police, in fact when you were initially contacted by the police, what this inquiry was about and who the focus of it was?"

The court heard the woman matched on Tinder with the accused in March 2018 and met him once where they kissed before meeting him a second time in early November.

Mr Mansfield asked her again if she had lied or exaggerated her story because she was ashamed and embarrased to have interacted with the man.

Mr Mansfield: "When you spoke to the police you didn't want to be associated with him and you wanted to portray him in the worst possible light didn't you?

Mr Mansfield: "You wanted to portray yourself as a bit of a victim for what had happened when you guys met up on the second occasion?"

Witness: "If I wanted to portray that I wouldn't have made a statement at all. Why would I want to be involved with this if it didn't happen. This is ruining my life."

The woman told Mr Mansfield her story, and the hundreds of messages she exchanged with the defendant, didn't have to make sense to him.

"I was completely scared and fearful. A person who can almost kill someone by suffocating them and then suddenly just fake that they had cancer to try and get me to have sympathy for them, just after he'd nearly killed me. They have a word for that; it's a sociopath."

Forensic pathologist Dr Simon Stables has been called to give evidence for the Crown; he will tell the jury Ms Millane's cause of death was pressure to the neck.

The trial before Justice Moore and a jury of seven women and five men is set down for the month.