A penguin playboy has been ruffling some feathers during a strong breeding season for Wellington's Little Blue Penguins. 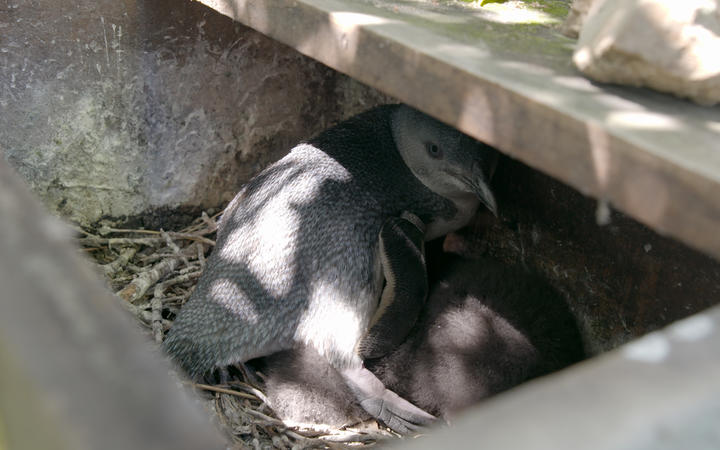 The Matiu/Somes predator free island in Wellington Harbour is home to about 400 nesting pairs of cheeky Korora but not all the penguins are behaving themselves.

But another Korora had made a name for himself, sticking his beak where he didn't belong.

Named Dexter, this Little Blue had earned the title of the island's resident playboy.

Penguin expert Mike Rumble said two weeks ago volunteers found Dexter on the island outside a blood-covered nest and suffering a head wound.

He had got into trouble after sticking his beak into another penguin's business.

But after some rehab, he was returned to his nest and then cuddled up to his lady penguin and egg.

Turns out the world's smallest penguins, definitely have big hearts.

"Shortly after that, we came over on Saturday to find Dexter, as he's been called by Wildbase, in another box covered in blood again. So he's become a real problem."

He had to be taken away again for more rehabilitation and a little bit of a telling off.

"Everyone was going tut tut Dexter, don't do that.

"Where he was found is only a matter of about two meters, the other side of a massive of bush. So it's very close, and it had two chicks that were not his," said Mr Rumble.

He said Dexter's behaviour had caused other penguins to attack him so they were taking him off the island for his own safety.

Apart from the playboy, everyone else had been well behaved - getting down to business with 75 percent of the 230 eggs already hatched, he said.

With 177 active nesting boxes on the island, Mike Rumble is kept busy checking on the status of all the new chicks, some still with their parents, and others fending for themselves but still covered in a soft down.

The Department of Conservation's Brent Tandy said nationwide little blue penguins were in decline, but the great nesting results were reassuring for the region.

"Considering we're in such an urban environment we've got a quite a healthy population and in Wellington harbour and on the south coast and I think that's in part, or probably mainly due to the fact that Matiu Somes is a predator free island which creates a stronghold here for birds."

Mr Tandy said the small birds with big personalities deserved to be in the running for the contentious bird of the year.

"The forest birds always get a good go, so I think penguins would be a fantastic choice this year and they're very charismatic, beautiful little things.

"I think they're well with a vote," he said.

Mike Rumble said with personalities like the playboy or the vagrant sushi penguins, they had the win by a country mile.