A former senior member of the defence force has admitted its document management systems "may not be the best" after strong questioning from a chair of the inquiry into Operation Burnham. 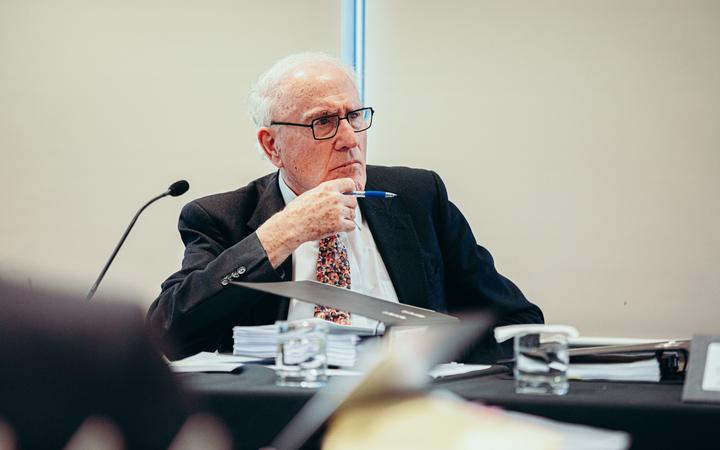 This during a public hearing into the operation which was carried out in Afghanistan in 2010.

Hearings have resumed in Wellington, after they were suspended when new evidence came to light - showing there was an International Security Assistance Force report into the operation, and that a register existed that showed it was put into a Defence Force safe in 2011.

That report showed it was possible civilians had died during the operation.

Retired Commodore Ross Smith was the Chief of Staff at the Defence Force when fresh allegations arose in 2014 that civilians had been killed in Afghanistan.

The then-Defence Minister Jonathan Coleman asked the force what it knew about the allegations, and today one of the inquiry's chairs, Sir Geoffrey Palmer, asked Mr Smith, who was chief of staff at the time, about it.

Mr Smith had earlier confirmed there was no written evidence of what Dr Coleman was briefed on.

Mr Palmer said it seemed surprising that piece of information couldn't be found.

He said the systems didn't seem to allow it.

"I just don't understand how the systems allow that to happen. Is it because of the systems or the secrecy?"

To which Mr Smith replied:

"Our document management systems, I would suspect, are not the greatest."

Yesterday retired Colonel Jim Blackwell, who was the Director of Special Operations at the time, gave evidence saying he had received the report in September 2011, and given it to deputy chief of staff in the Office of the Chief of Defence, Mike Thompson.

Not long after, he said, he briefed the Defence Minster of the time, Wayne Mapp, about the report and its findings.

But today retired Colonel Thompson told the hearing he couldn't remember any such discussions.

He agreed he would remember such an important document being given to him, and said on the basis that he couldn't recall the exchanged, he had to disagree with the evidence Mr Blackwell had given.

Former Chief of Defence Staff Rhys Jones also told the hearing he could not remember being briefed about the report when it was received in 2011.

He said he was away at the time, but would have expected to be briefed on the report when he returned. If he was, he could not remember it.

He did not know if the Minister of Defence was told of it.

Earlier retired Captain Christopher Hoey told the hearing he could not specifically remember being given two secret documents, the IAT report, and the Operation Burnham 'storyboard'.

But his initials were on a register that showed he had, on 1 September, 2011.

He was working at the time as the Military Secretary for Mr Mapp.

Mr Hoey said he would have flipped through the documents, and not closely read them - but known they referred to Afghanistan and were therefore important to the government.

He said it made sense, that because there was evidence he had signed them onto a defence force register, that he had either picked them up from the Defence Force, or they had been brought to him in the minister's office, with the Office of Defence Force register for him to sign.

He said he was certain he would have given the report to the minister.

His evidence was that the document was registered into the Military Secretary's safe on 2 December, three months after it he got it.

It was shredded three days later.

Mr Hoey said this was because the Defence Force would have had its own copy of the report, and it was normal process to destroy material no longer needed by the minister's office.

When asked by a lawyer for the inquiry, Andru Isac QC, if he thought it was appropriate and responsible to shred when there was a new minister coming, Jonathan Coleman, Mr Hoey said as far as he knew the issue had been finished with.

Mr Isac questioned Mr Hoey at length about the nature of the registers used to record documents, and what they showed about how the IAT report was handled.

He said there was nothing in the register that referred specifically to the IAT report, despite other entries being very carefully entered.

Mr Isac put it to Mr Hoey that the complete absence of any indication of the IAT being recieved by Mr Hoey, was an indication he didn't have it.

He said he believed it was part of the documents Jim Blackwell would've used to brief the minister.

Former Chief of the Defence Force Rhys Jones also told the hearing he did not know there was a copy of the report - that confirmed civilians may have died during the raid - at the New Zealand Defence Force Headquarters, during his time as boss.

He had no recollection of being briefed on the report's existence. He said he may have been briefed and not remember, or that he was not briefed at all.