The way the defence force held records relating to Operation Burnham has been under scrutiny at today's public hearing.

The way the defence force held records relating to Operation Burnham has been under scrutiny at today's public hearing. 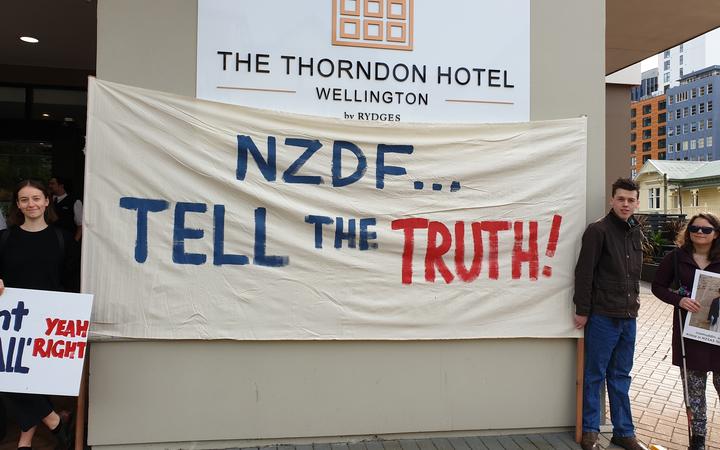 The Inquiry is investigating allegations the defence force covered up civilian deaths during the operation in Afghanistan in 2010.

Last month it was revealed there was an International Security Assistance Force report into the operation, and that a register existed that showed it was put into a Defence Force safe in 2011.

That caused the inquiry to pause, and public hearings started again today.

Military staff told the inquiry they didn't know how Defence got the report, known as an IAT report - but the register was signed in by the office of the director of special operations.

He explained he asked for the report in April 2011, after allegations of civilian deaths emerged in the media.

He says he printed a copy of the report, and took it to deputy chief of staff in the Office of the Chief of Defence, Mike Thompson.

"I said to him this was a document the Chief of Defence, and the Minister of Defence, needed to see."

Not long after, he said, he briefed the Defence Minster of the time, Wayne Mapp, about the report and its findings.

Mr Blackwell said he had asked for that report from those in the conflict zone by email.

But the lawyer for the inquiry - Kristy McDonald said no such emails had been given to the inquiry - and suggested perhaps Mr Blackwell had not sent any.

At which point the Defence Force lawyer Paul Radich interjected.

"We've addressed the fact I think in the evidence of Colonel Blackwell, that the emails over this period just aren't available, much to everybody's frustration, our own included, that the way in which the system has worked is that those emails are not there.

"When we're dealing now with information alleging people's involvement that we haven't seen and we don't know about it becomes very difficult."

But Ms McDonald said there were emails, classified emails from the conflict for that period of time, just not those specific emails.

Mr Blackwell told the inquiry he had found it was better to store his documents electronically than to make hard copies.

He said he had a very secure system.

Mr Blackwell said he had been told his information that related to the inquiry was no longer available on that system.

"To be honest I'm pretty disappointed, there's decades of operations in there and I would've thought all of that information would have been particularly relevant."

He said the computer system would have had a copy of the report, the email it came with, and copy of any briefings he had made to the minister of defence.

He says one copy of the report went into the safe in 2011, the other went to Defence Minister Wayne Mapp, via the office of the Chief of Defence Force.

Mr Blackwell told the hearing what he had told Mr Mapp in a briefing about the report.

"I said that the document ... was that there may have been, but there was no evidence I had viewed, that lead me to believe that there were civilian casualties."

In 2014 the report was found in a safe by Mr Coleman's staff.

Dr Coleman corrected the public record but Mr Keating did not.

Mr Keating has previously told the inquiry he has no idea who put the report in the safe.

The hearing will continue for two more days, with Mr Mapp expected to give evidence on Friday.