Religious leaders are appalled that the Christchurch mosque shooting appears to have inspired a copycat. 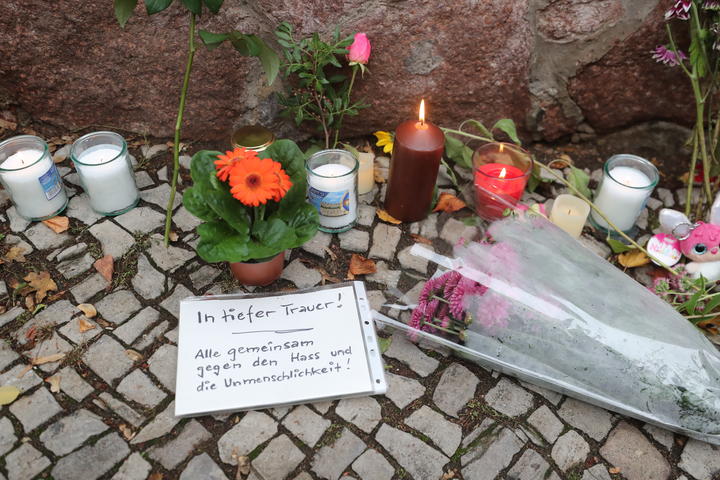 Candles, flowers and a note which translated reads: "In deep sorrow! All together against hatred and inhumanity" lie in front of the synagogue. Photo: AFP

A gunman in Germany shot and killed two people as he attempted to enter a synagogue at Halle during a Yom Kippur service and livestreamed the attack, leading many to draw comparisons to the Christchurch mosque shooting.

New Zealand Jewish Council spokesperson Juliet Moses was horrified by the attack on Yom Kippur, the holiest day of the Jewish year, known as the day of atonement and marked by fasting and prayer.

"I just felt as I'm sure the whole Jewish community does, just very distressed to hear of the attack ... on the place of worship."

When Ms Moses learned the attack had been livestreamed, she was sure the shooter was influenced by the Christchurch shooting.

"These attacks [such as the El Paso shooting in August] are copycat attacks and awfully, [the shooters] look to the Christchurch attack as some sort of depraved inspiration."

Ms Moses said she was relieved the man was not able to breach the synagogue's advanced security system because that prevented more fatalities.

It was a sad reality that places of worship needed to have a security system in the first place, she said.

John Milne's 14-year-old son was killed at the Al Noor Mosque on 15 March.

Mr Milne thought it was inevitable that someone else would target a religious ceremony with violence and livestream it.

"The copycat nature of that sort of event, there's bound to be people that will want to repeat that sort of thing and traumatise anyone else. It's just such a violent thing to do."

Yesterday, the chief censor classified the livestream of the attack, as objectionable. In the video, the gunman is reported to have made anti-Semitic remarks, calling himself a holocaust denier.

Knowingly possessing or sharing objectionable material carries a prison term of up to 14 years in New Zealand.

Mr Milne said it was imperative these videos were shut down.

"It's a must, they must not be seen, because of what just happened, and it is obviously a copycat."

For the past three years senior researcher at Independent Research Solutions in Christchurch and PhD student Ben Elley has studied how the alt-right organises itself online.

He said first person recordings of mass-shootings are often reviewed and critiqued on platforms by the alt-right.

He said these videos are also a powerful recruitment tool for the alt-right.

"One of the effects that having a video recording of events has is that it allows people to critique it in detail and also to get a sense of exactly what it might feel like to do it. It makes them feel more like they could do it themselves."

He said on 4chan members of the the alt-right have chastised this particular shooter.

"I have seen that 4chan is very disappointed in this particular individual rather than lauding him in the way that they have with previous attackers."

Ms Ardern said Amazon, which signed up to the Christchurch Call following the 15 March attack, was quick to take the video down.

Internal Affairs has not so far received any reports from people who have come across copies of the livestream.