Spark Sport says an overseas network is behind the video quality problems with the All Blacks' first match of the Rugby World Cup last night.

Screen pixellation was a problem for many viewers during the streaming of the All Blacks vs Springboks match at the Rugby World Cup in Yokohama. Photo: RNZ / Martin Gibson

The feed was disrupted so much Spark Sport was forced to simulcast the second half of the game against the Springboks on free-to-air TVNZ.

Spark said the video stream is passed from its streaming platform in the United States via the network to broadband providers in New Zealand.

It said its technical team is working to confirm this and put a fix in place.

Spark Sport said it's still too early to say whether the issue will be fully resolved in time for today's cup matches. It will decide whether to simulcast on TVNZ's Duke channel by 1pm today.

Several viewers have told RNZ they experienced buffering and freezing of the screen within the first 15 minutes of the game.

Trying to be 'in the moment' but continually interrupted and having to reset the app on my tv, and then the pathetic frame-by-frame staccato display for much of the second half was really, REALLY frustrating. Thanks for nothing.
Care to offer the $80 sub back? #SparkSportFAIL

A Tauranga rugby fan said it was disastrous watching the match last night.

Jesse Archer, who works for an internet service provider, said he had problems even though he has the best equipment set up to watch streaming content.

He said a number of his customers also got in touch in regards to the poor picture quality.

"The typical experience was you'd be watching the stream and the quality would drop completely off.

"So if you imagine a poor-quality YouTube video going from HD to something you can barely see on the screen I think that was the fairly typical experience from about 10 minutes in through until halftime."

Mr Archer said some people bought smart TVs especially to watch the games and it's more unfair to them.

In a statement late last night, Spark said it became aware that the quality of the video stream was fluctuating for some customers.

"We were uncomfortable at the quality of the experience our customers were getting and, as we always said we would, we moved quickly to provide them with an alternative means of watching the match. We had prior established procedures with our partner TVNZ to enable live, free-to-air coverage at short notice.

"We made the call just before half time to immediately simulcast the rest of the match live on TVNZ Duke and we communicated this through our channels and the media. A banner message was also subsequently displayed on Spark Sport." 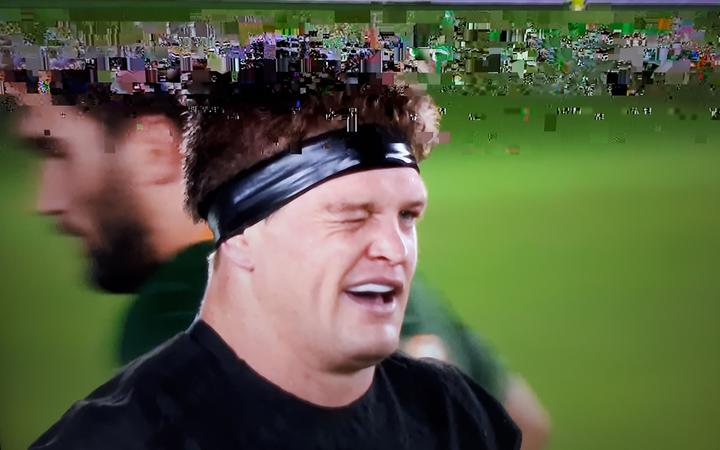 Spark said the video streaming quality issue improved and by the last quarter of the match streaming across all devices appeared stable once again.

"The root cause of the video streaming issue is still being investigated with our international streaming partners. However, we can confirm that the issue was not related to New Zealand broadband capacity, with the demand for this game well within our operating thresholds. It was not confined to customers of any particular broadband provider," the Spark statement said. 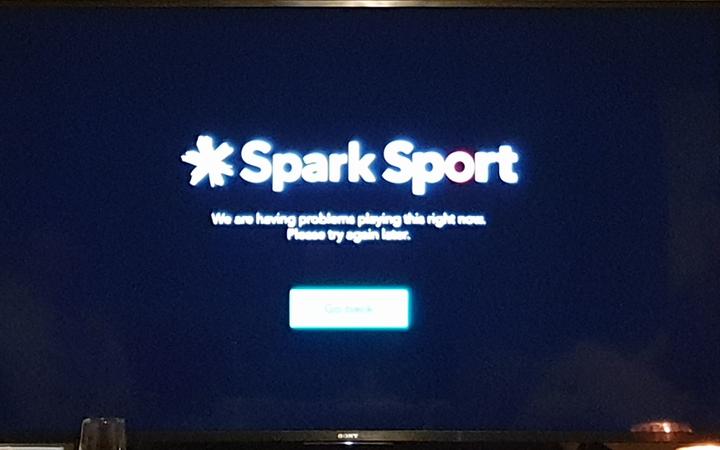 The message some fans were receiving during the match. Photo: RNZ / Yvette McCullough

Spark CEO Jolie Hodson said: "We are very disappointed that some New Zealanders did not get the experience they deserved last night during such an important match. Making a quick decision to give them an alternative means to watch the All Blacks was the right thing to do.

"We apologise to all impacted customers and we will be working with our partners to rectify what happened and ensure the rest of the tournament goes well."

TVNZ says there will be no delayed coverage on demand

Some viewers were disappointed last night, when they were unable to stream delayed coverage of the All Blacks' first match on TVNZ's on-demand service.

A TVNZ spokesperson said while they are Spark Sport's free-to-air partner for the world cup, they are a television only option.

The spokesperson said they do not have the rights to stream matches through their online platform.

TVNZ said people can watch delayed coverage on TV One through a digital television provider.