It is the 20th-anniversary of an international military force - which included a large New Zealand presence - going into what was then East Timor to restore law and order as the country erupted into violence. 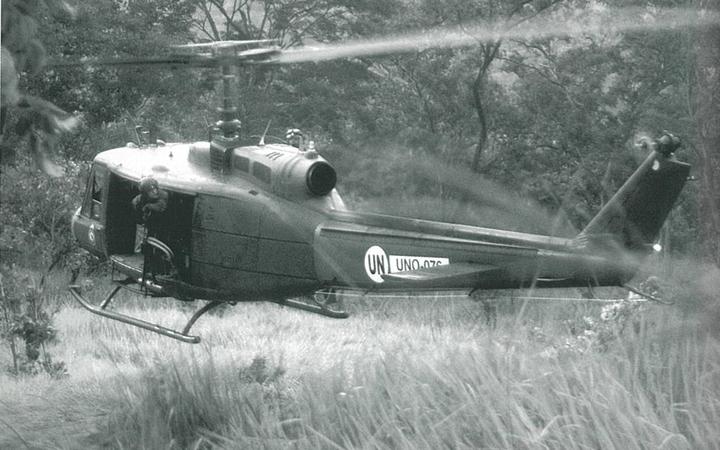 An RNZAF Iroquois hovering just above the ground as it waits to pick up a patrol in the Tilomar area. The door gunner, LAC Daryl Fell, is checking the tail rotor clearance in March 2000. Photo: Supplied / NZDF

Now known as Timor-Leste, it descended into a state of anarchy in 1999 after the result of a referendum supported a breakaway from Indonesia following 25 years of occupation.

Commemorations marking the setting up of the International Force East Timor, known as Interfet, take place in the capital, Dili, today.

Between September 1999 and 2002, more than 5000 New Zealand Defence Force (NZDF) personnel served in Timor as part of Interfet and others did until 2012, serving with the United Nations.

A number of New Zealand police also served there.

It was the NZDF's biggest deployment since the Korean War. 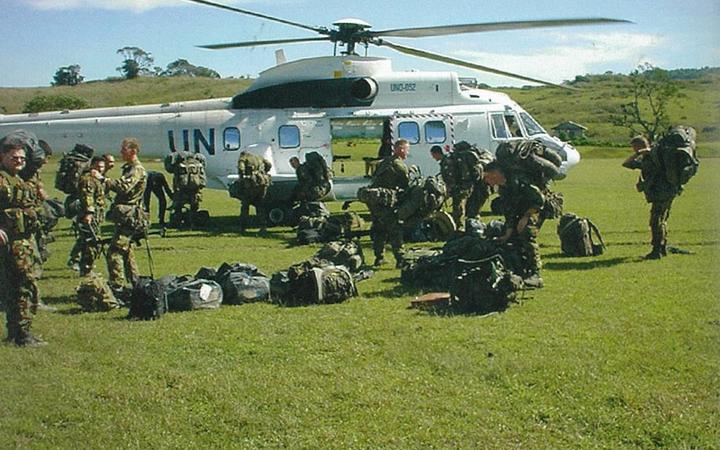 New Zealand troops preparing to board a United Nations Puma helicopter at Belulik Leten. The New Zealand company base at Belulik Leten was about a 12-minute helicopter flight from the battalion headquarters in Suai, but a three-and-a-half hour journey by road in good conditions. Photo: Supplied / NZDF

The New Zealand force was primarily stationed at Suai, south-west of Dili.

"Dili was still burning, there was rubbish everywhere, including human faeces in almost every building and there were dead bodies lying around which had to be recovered. It was a pretty horrific time to be in East Timor."

Professor Harper, Professor of War Studies at Massey University, said the Interfet force went into a hostile and dangerous place.

The SAS were first in, followed by an infantry company.

"Nobody knew what was around Suai at the time. There had been a couple of massacres there. They were flown into an airfield and made the main effort for the Interfet operations and they were basically flying into the unknown."

"The place was just devastated. A lot of little villages and hamlets had been totally destroyed, everything. Buildings burnt to the ground and just very little left there and in fact very few people in the whole area, it was quite eerie and it was certainly an environment where we were very concerned about the situation."

New Zealand's role was to secure the Cova Lima region from the threat of militia groups and allow locals to return home safely. 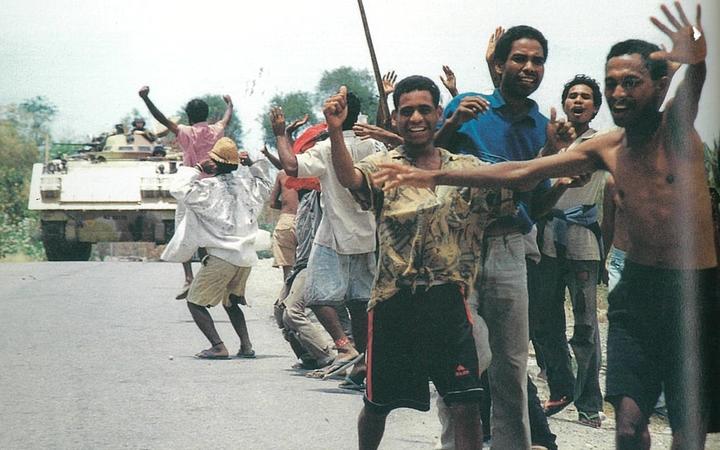 "It took us at least a month to get onto the ground properly to expand out into our area of operations, and particular up to the border and feel confident that we had control of the total area for which we were responsible."

"It takes time, not least because you have to get all of the forces on the ground properly and all the support required to operate," he said.

The conditions and mountainous terrain made flying very challenging, particularly in the wet-season, he said.

"We achieved the vast majority of the flying we were asked to do just by taking it carefully."

There was always the threat of armed conflict, he said.

"We had no evidence of ever being shot at in the helicopters."

In mid-2000 the Airforce were required to cross the border into West Timor (Indonesia) to evacuate a United Nations compound.

"They were prepared for things to heat up quite a bit, but luckily that didn't eventuate, but that was pretty tough for them."

Retired Commodore Ross Smith commanded the HMNZS Te Kaha. Its role was escort duties and surveillance during the first days of the crisis.

He recalled first sailing into East Timor waters and the sight he saw.

"It was quite early in the morning, 1, 2 o'clock and we were able to make out fires that were still burning in Dili. I was on the bridge at the time and there were a number of us up there looking at this and that focused the mind on why we were there and what we were about to be part of."

Colonel Burnett believed the Interfet deployment was essential in stopping the country descending into chaos. 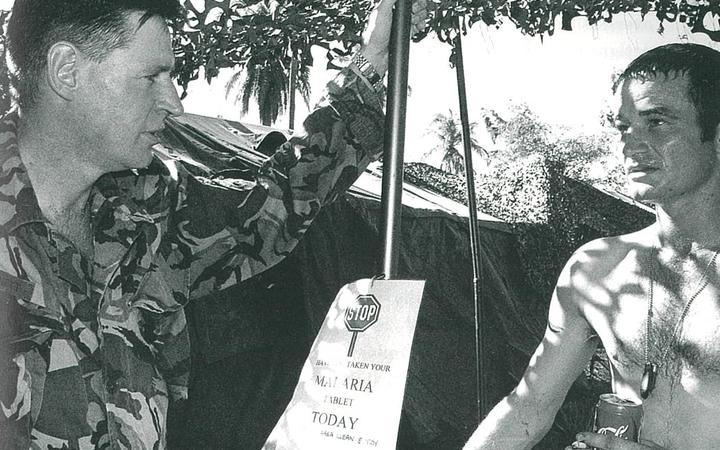 Lieutenant Colonel Kevin Burnett (at left) talking to one of his men. The sign in the middle of the photograph reminds personnel to take their daily doxycycline tablet to guard against malaria. Photo: Supplied / NZDF

"I would think the militia [would] have continued to hold sway and force their will on the local population and it would have been a very dire situation."

"It was pretty lawless and someone needed to be there to help with the security situation and make the place safe again so the country could get started."

Five New Zealand soldiers died during this country's deployment in Timor, including Private Leonard Manning, who was killed-in-action with pro-Indonesian militia in July 2000.

Warrant Officer Tony Walser died when the road collapsed under the truck he was driving. Staff Sergeant William White was killed when his truck plunged down a 30-metre bluff. Private Boyd Atkins died in a swimming accident, and Private Dean Johnston was found dead at a United Nations Barracks in Dili.

Colonel Burnett said it was important that the sacrifices made by New Zealand soldiers and their families were acknowledged and remained visible.

Professor Harper said the New Zealand deployment was well organised, but once there it became abundantly clear New Zealand had a significant logistical shortfall.

"Some of our equipment was ageing and failing, particularly the armoured personnel carriers we sent over there and I think about 50 percent of them broke down and had to be parked up and also the old radios we were using were not that effective."

"In the main it worked fairly well and we learned an awful lot from it."

A number of former NZDF personnel who served in East Timor both with Interfet and the later United Nations Mission will attend commemorations in Dili marking the 20th anniversary. 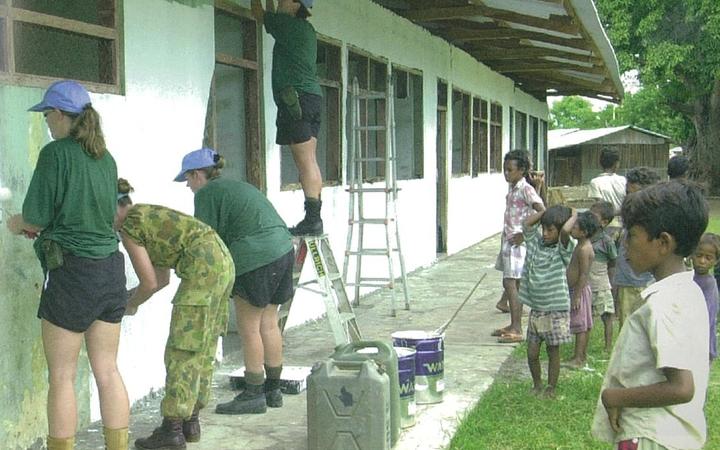