Broadcaster Mark Sainsbury wants the government to establish a "champion for the elderly". 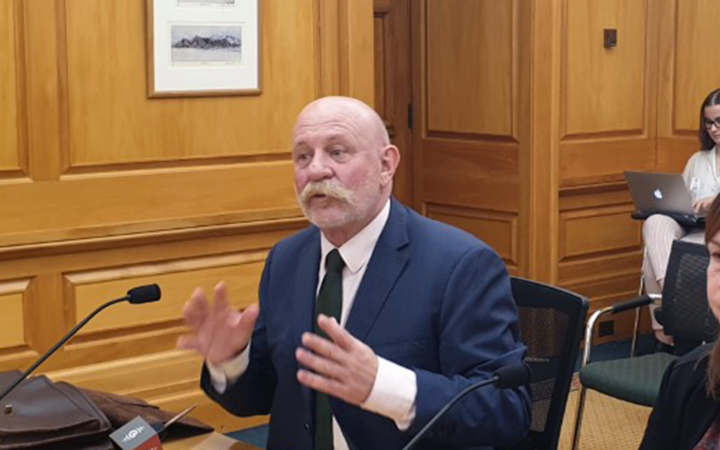 Mr Sainsbury appeared before the health select committee this morning to speak about his petition calling for an elderly commissioner to be created.

He was joined by the woman whose story of the alleged neglect of her father in a care home inspired him to campaign for action.

But despite it being a campaign promise from Labour, it looks unlikely there'll be any action this term.

Last year Corina O'Brien rang in to Mr Sainsbury's talk-back radio show in despair about the way she said her father was being treated at Palms Lifecare.

Her father was only at the care facility for 90 days before passing away, but a Counties Manukau DHB report found a series of issues.

It found his pain wasn't managed appropriately, the family had difficulty discussing their concerns about his deteriorating condition with staff, and there were issues with regular showering.

Maggots were found in his toes when his leg was being dressed.

Mr Sainsbury said the story was horrifying to hear, as was the response it evoked.

"For me what was most disturbing was people ringing in who were just genuinely terrified.

"They're saying we do not have any family, we do not have someone like Corina arguing our cause, what happens if I get sick and go into care, there is nothing to protect me.

"It was just absolutely heartbreaking listening to those people, so we decided we had to do something," he said.

Mr Sainsbury said while there were avenues for people with concerns to reach out, the message he was getting was it was too complicated, took too long, and they didn't feel safe.

"It's spread through the Health and Disabilities Commission, the Ministry of Health, the DHBs, the Retirement Commissioner, the Ombudsmen, there's all these different things.

"There's no one single person or office where people go, you are there for me.

"I'm sorry, but that's something we need to address, whether that's changing the perception or changing the job," Mr Sainsbury said.

Ms O'Brien said as well as complaining to the DHB, she took her concerns to the Health and Disability Commissioner.

"I got an electronic acknowledgement of it, and then, dad's been passed away 18 months now, in the last month I got an email.

In a statement, the Deputy Health and Disability Commissioner (HDC) Rose Wall said: "HDC has completed a detailed assessment of this complaint, which included getting independent clinical advice.

"That assessment made clear that this case warranted a further formal investigation into the care provided. We expect to keep complainants updated throughout our process but that seems not to have happened in this case, something we regret."

Ms Wall said on average it took the HDC four months to assess and resolve a complaint and nine out of 10 complaints were closed within nine months, but complexity did take time.

The HDC said it had a significant increase in the number of complaints it received in recent years, and residential aged care complaints consistently made up around five percent of all complaints.

When in opposition, Health Minister David Clark pledged to introduce an Aged Care Commissioner if elected - promising that it would be provided for in their first Budget.

Today, he deferred questions on the issue to the Associate Health Minister, Jenny Salesa.

"That's something that really sits in Minister Salesa's area as the health lead in the aged care sector, I know she's reviewing a lot of the settings in that area at the moment," Dr Clark said.

Ms Salesa is currently overseas and unavailable for comment.

But New Zealand First MP and Minister for Seniors Tracey Martin wants to see a commissioner, with the same monitoring and advocacy powers as the Children's Commissioner.

"[Elderly] are a large part of our population and they're going to get larger and I don't think at this stage that we have an independent advocate, that away from government there is someone keeping government honest and pushing them on the issues that are important to this group of New Zealanders," she said.

Ms Martin said while she's not sure what Labour and the Greens positions are, this is a piece of policy work her party is looking at.

However she said that isn't something that will be enacted before next year's election.