Frustration is building between Christchurch restaurateurs and taxi drivers over the lack of parking in the city, with no solution in sight. 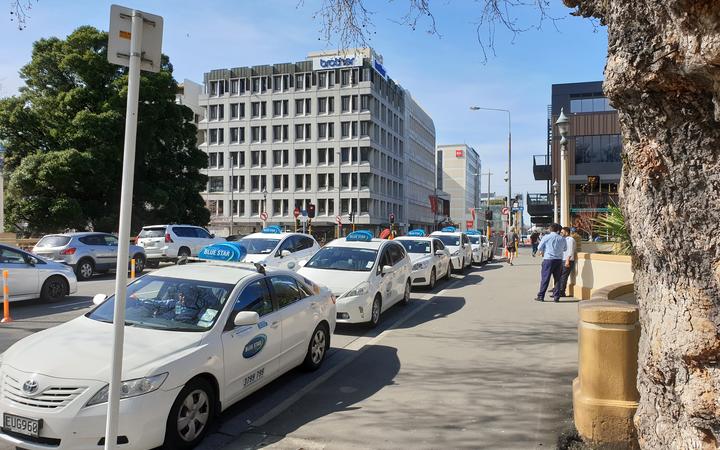 Four spaces are available at the taxi stand on the bridge on Hereford street, driver’s say competition is fierce to get a spot there. Photo: RNZ / Nicholas Pointon

A bar owner is fed up with taxi drivers sitting in car parks without paying, saying it stops people from coming into the city.

However, taxi drivers have said they have little choice with so few taxi stands available within the city's four avenues.

The tension follows a council commissioned report last month, which said that consumers preferred to stick to malls in the suburbs rather then venture into the city to do their retail shopping.

On Christchurch's busy Hereford Street on Wednesday morning, two taxis sat in five minute carparks and had not moved for over 30 minutes. One hundred metres down the road is a taxi stand, which is filled to capacity.

Taxidrivers not paying for carparks is an issue that has frustrated The Little Fiddle Pub co-owner, Mel Ling, for some time now.

"When they're not paying for it they're taking up carparks where people in town need to use them. There's a big difference from parking there and paying $3 an hour, then going into a car park building where you get charged twice as much when you're running in and out."

In August, a council commissioned identified that people began staying closer to home or heading to suburban malls after the earthquakes. Those shoppers had been slow to respond to new offerings in the central city, the report found.

Ms Ling believed the lack of parking in the CBD is a major reason why people have shyed away. She said taxi's taking up car parks did not help the situation and it was also affecting her business.

She says the lack of car parks affects day trading because people are less likely to park, and have lunch for an hour.

"At night people are more likely to drink more and they taxi in and taxi home for safety reasons."

Miss Ling and her husband, who co-owned the pub, have attempted to talk to taxi drivers and express their concerns. On more then one occasion they have been met with verbal abuse.

"When you try to talk to [the taxi drivers] or go to explain [why we're frustrated] they just abuse you. I've been called quite a few pretty little things. It gets to a point where you're almost intimidated by them."' 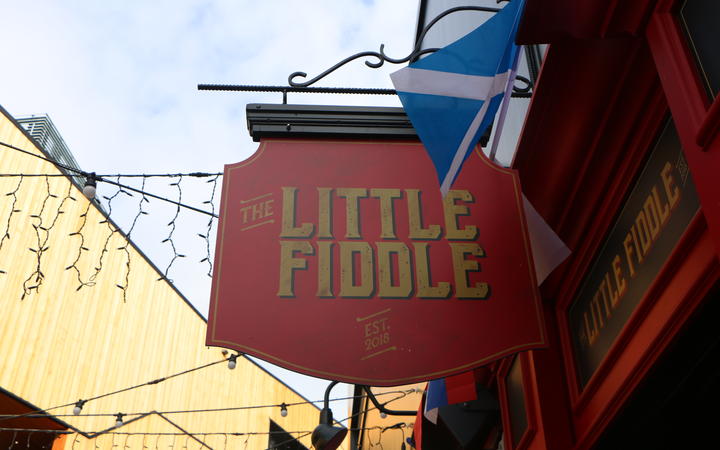 Mel Ling, who co-owns The Little Fiddle Pub, says taxi’s taking up car parks is not helping the overall lack of on street parking in the city. Photo: RNZ / Nicholas Pointon

Miss Ling and her husband have singled out Blue Star Taxis, complaining to the company directly about the harassment.

Blue Star declined to be interviewed for this story, but said they had received no complaints about their driver's verbally abusing the public, and their drivers were instructed to pay for parking if they they could not find a taxi stand to park in.

Ms Ling said the drivers pushed not paying for parking to the limit.

She said while she is frustrated, she empathises with the drivers and wanted to work out a solution together because her business relies on them at night.

"I know they've got the business to do and all that. So I mean, the council obviously has to put more taxi rinks in that can be used during the day."

Miss Ling said the council had been helpful, and were always responsive when she called about a taxi driver who had camped out in a car park without paying.

Taxi drivers that RNZ spoke to on the streets of Christchurch echoed the same message, there were not enough taxi stands in the city.

One taxi driver, who did not want to be named, said the number of taxi of stands had shrunk. He said there used to be a taxi stand next to the bus interchange which was good for business.

"A lot of people used to feel sick of waiting for the bus and hop into the taxi, especially older people and people who needed to go to the hospital."

The driver said he had to pay hundreds of dollars in ticket fines in the past month for overstaying in carparks.

Another driver, who also did not want to be named, said the lack of taxi stands meant competition for a space can be fierce.

He said drivers were often slapped with $200 fines by the police if they were parked just outside a taxi stand.

"If there's four cars parked at the stand [on the Hereford Street Bridge] and if your car is hanging out a little bit out of the park, you will get a ticket."

He said there are so many taxis out there, especially on the weekend and not much money is to be made..

"So if you've get a $200 ticket from the police, pretty much whatever you earn on a night your money's gone. But the problem is we don't have enough parking in the city."

He called for the police and parking wardens to use their discretion.

"My staff will always try to gain compliance first. If its a standing complaint the parking wardens just issue infringement notices, they wont ask the taxi drivers to move, but in general, they try to get compliance on the first instance."

Mr O'Keefe confirmed that there were between 45 and 50 taxi spaces available in the city but was unable to answer if there were plans to increase that number.

A council spokesperson said the council voted to create four more taxi stands along Hereford Street in March, but no date had yet been set for their construction.