The Department of Conservation says no-one has been prosecuted for stealing moa bones from public conservation land despite a number of investigations over the last five years. 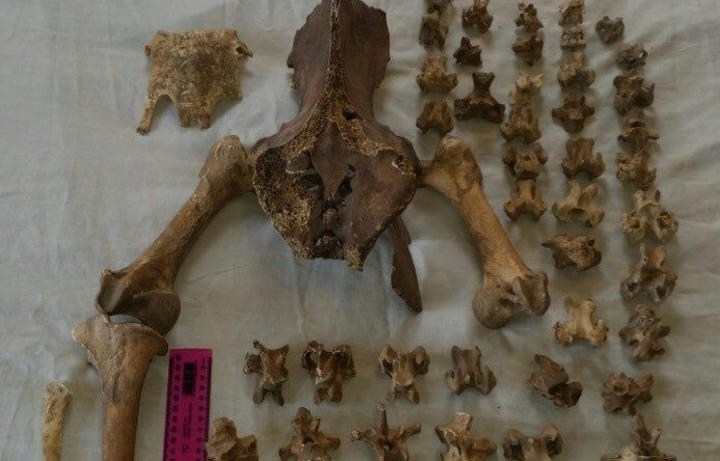 Moa bones that were listed for sale on TradeMe. Photo: TradeMe

Legislation protects native species from being traded but a loophole means some remains of extinct species are fair game.

DOC senior policy advisor, Michael Gee, said they investigated a handful of cases of looting but it was too difficult to prove the moa bones were taken from protected sites.

"There have been no prosecutions brought by DOC in relation to removal of moa bones," Mr Gee said.

"The challenge is that to prosecute, we have to prove the moa bones or egg shells were taken from public conservation land."

He said once bones and egg shells had been removed from a site it's extremely difficult to prove they were taken from public conservation land.

"The difficulty getting the evidence required to take action has meant we haven't filed any prosecutions for taking moa bones and egg shells from public conservation land."

DOC monitors important cave systems on public conservation land that are known to contain moa bones, and in some places has installed security gates to restrict access.

Curators around the country are often asked to identify moa bones found in the wild or in long-forgotten family collections.

Canterbury Museum houses the largest collection of moa bones in the country and its curator of natural history, Paul Scofield, said he had given DOC what he thought was enough evidence to prosecute moa site looters on several occasions, but to no avail.

"We're very wary of the fact that some material may have been collected on government land, in particular DOC land, and in those cases we have informed the DOC when it is clear that actually has occurred," Dr Scofield said.

"It's extremely frustrating because this is the heritage of New Zealand and if the DOC don't have the resources to protect the heritage which is on their estate it makes you wonder are they the right people to be looking after that estate?"

Dr Scofield said the trade of moa bones needed to be made illegal to dissuade looters.

It is illegal to trade the remains of extinct species only if they are found on protected land or archaeological sites - and experts say most sites where moa bones are taken from are protected.

Otago Museum assistant natural history curator Kane Fleury said they got regular requests to identify moa bones and could usually tell if the person was planning to trade them - in which case they refused to verify the bones.

"People underestimate how many moa there were in NZ and how much material is left and can be found at sites. There is actually a lot out there but it's important people don't go pillaging these sites," he said.

Auckland Museum has a large collection of more than a thousand moa specimens, including full skeletons.

Its curator of land vertebrates Matt Rayner said it received at least a dozen requests a year to identify bones thought to be moa.

"We get situations where people are like 'I've been clearing out my great uncle's garage and I found this box of bones I think it's moa bones'. They'll bring them in and sure enough they turn out to be moa bones but those bones might not necessarily be associated with good science information on where they were collected and what date they were collected, which is particularly important for research around moa biology."

Dr Rayner said there were traders known to curators who sold bones online who they believed regularly looted protected sites.

That's a message the northernmost iwi, Ngāti Kuri, wants to get out.

Iwi trustee Sheridan Waitai said she had noticed an increase in people pillaging bones in the last few years.

"Moa bones are of national significance to us because they are rich in history to help us understand the biodiversity and what was around at that time so it's important for people to just leave them alone."

And if you come across a bone that looks like it could be from a moa - the museum curators RNZ spoke to recommend noting its position, leaving it there, and calling the local museum.