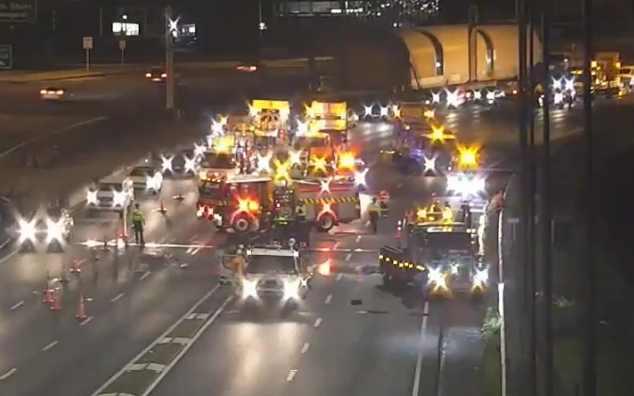 Emergency services were called to the scene at the northern approach heading south about 4.40am, where crews put out the fire.

Police said a car was also involved. No-one was injured

Just before 7.30am, NZTA said all lanes had reopened, with a 70km/h speed limit on lanes one and two due to diesel residue

Traffic was backed up with delays of 90 minutes. Motorists were advised to delay all non-essential travel on State Highway 1, avoid the area and consider working from home.

NZTA's Auckland operations manager, Rua Pani, earlier said there were queues backing up from the Harbour Bridge to Upper Harbour Drive, as well as queues on SH16 and SH18.

Northern bus services to the city were also delayed by up to 13 minutes.

SH1 NORTHERN MWY, SOUTHBOUND - 5:55AM
A truck crash is blocking 4 (of 5) lanes citybound just prior to the Harbour Bridge. Congestion is building rapidly. Please DELAY YOUR JOURNEY south this morning until all lanes are cleared. ^TP pic.twitter.com/ezBNGswsju

"My advice is twofold - one is if [you] can, use the northern expressway ... or delay [your] travel for at least another hour ... it is going to take quite a long time to clear the backlog."

SH1 NORTHERN MWY, SOUTHBOUND - UPDATE 7:20AM
All lanes citybound are NOW OPEN again prior to the Harbour Bridge. Westbound on SH18 also remains heavily congested. Please allow extra time for any journey from the North Shore this morning. ^TP pic.twitter.com/Z177vlzNqU

A small truck had collided with a barrier, rolled and spilled debris including diesel, paint and parts across found southbound lanes before catching on fire.

"There's no road damage, we've actually cleaned up three of the lanes and we've had to lay down some grit to make it safe to travel through the site."

Commuters were advised to use the Western Ring Route to go south.

One person caught in the traffic said in five years of early commutes she had never seen anything affect the traffic that badly at that hour of the morning.

"It took 20 minutes to move from the end of the Onewa on-ramp to the point at which the one lane of traffic could finally cross the Bridge," she said.

"As soon as I reached the on-ramp I could see the massive line of cars at a standstill."

"There was one police officer waving through traffic, and slightly further on, what looked like an overturned burnt shell of a truck next to a fire engine.

"Drivers seemed fairly resigned to the delay and were pretty courteous - although I felt sorry for those motorists further down the line, it's going to be a slow commute for them.

The Transport Agency had planned to close two southbound lanes on Auckland's Harbour Bridge once peak traffic had cleared to assess the road and carry out any remedial action needed.

A median barrier in the right-hand lane would also be replaced.

Traffic had eased by the lunch hour and the road was back to normal, with all lanes open.

The bridge is returning to its normal lane configuration for the afternoon rush hour.