By Pam Jones for the Otago Daily Times

All he was doing was cooling off on "quite a ripper" of a day, taking his dogs for a swim in a local swimming hole. 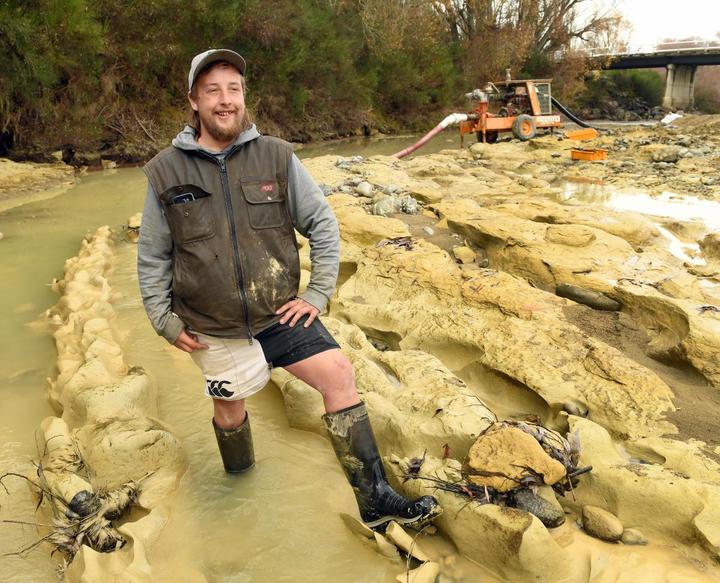 Michael Johnston at the riverbed site where preparations are being made to remove the the fossilised moa footprints he discovered. Photo: ODT / Stephen Jaquiery

But Ranfurly man Michael Johnston ended up making a discovery of international significance, putting the Maniototo into the record books by finding a series of fossilised moa footprints millions of years old.

The footprints were the first moa prints to be found in the South Island and a "glimpse into the past before the ice age", Prof Ewan Fordyce, of the University of Otago's department of geology, said.

The imprints were found in the bed of the Kyeburn River, about 15km from Ranfurly, and their discovery was thanks to "an amazing coincidence of circumstances", Dr Mike Dickison, a moa expert, said.

"I'm amazed at the luck of finding them - catching it in this very brief window between being exposed and being scoured out, and then that somebody happened to be fossicking around and went for a swim and noticed them.

"If any one of those things hadn't happened, we would never have known they were there, and it makes you wonder how many other moa prints are buried or destroyed, or no-one knows they're there."

The imprints were thought to have been exposed by significant flooding in the Maniototo late last year, and it was likely they would not have survived another flood event, Otago Museum natural science assistant curator Kane Fleury said.

Mr Fleury acted immediately when Mr Johnston sent photos of the footprints to the museum after he found them in early March.

He met Mr Johnston at the site and used an underwater camera, snorkel and mask to examine the markings, which were about 1m under the water.

Seven clear footprints were found, each about 30cm by 30cm, and an action, preservation and excavation plan for the footprints was immediately prepared.

Mr Fleury, Prof Fordyce, Dr Dickison, about another six museum, university and iwi representatives and several contractors have been involved in the extraction of the moa prints from the Kyeburn site this week.

Resource consent and iwi and landowner permissions - the riverbed is on Land and Information New Zealand land - were gained, and the Kyeburn River temporarily diverted since Wednesday to pump out the water over the footprints. 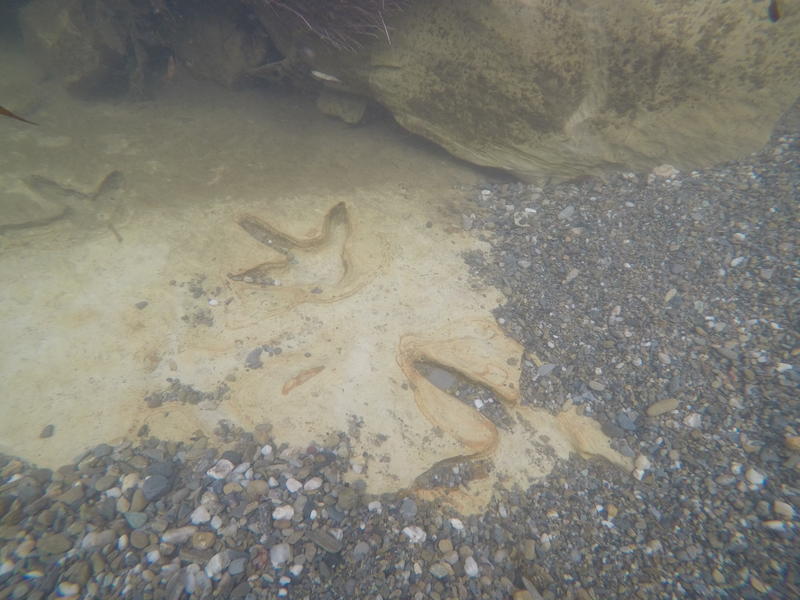 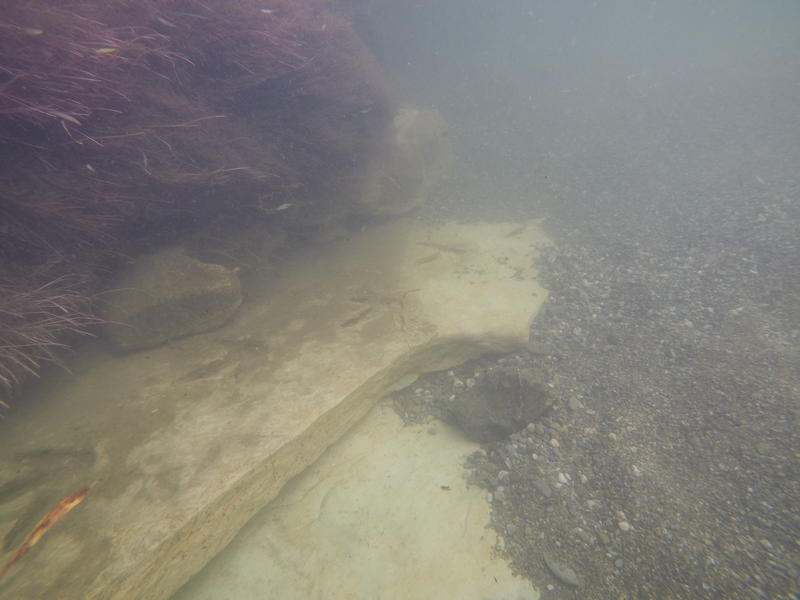 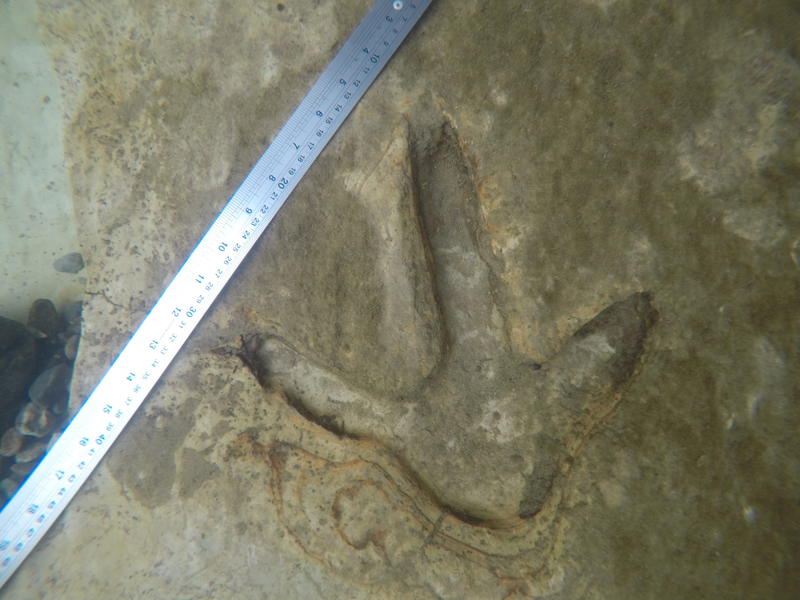 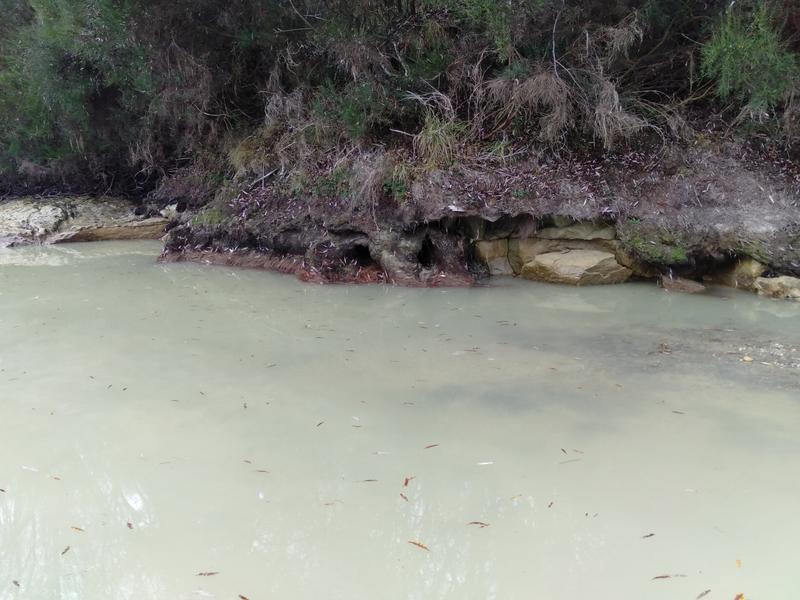 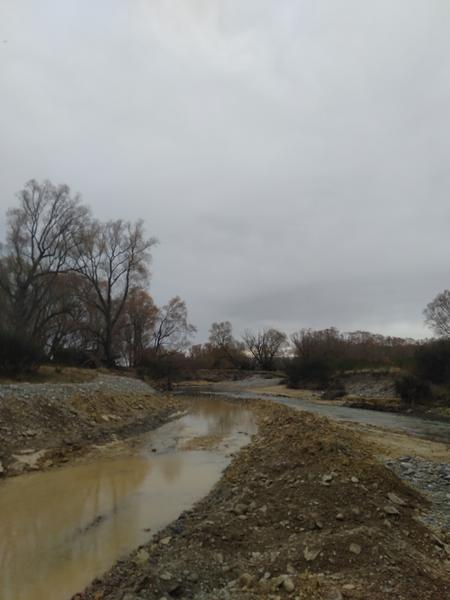 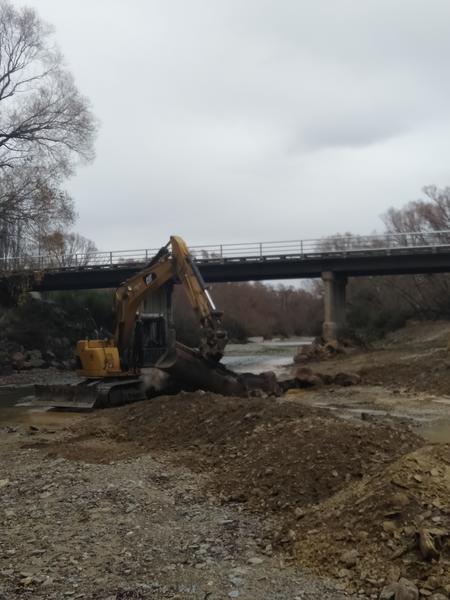 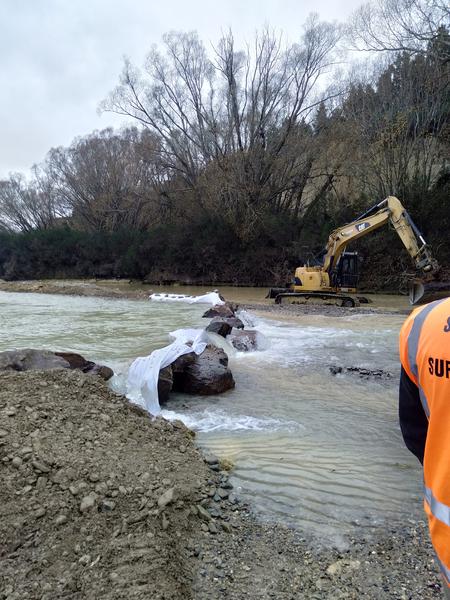 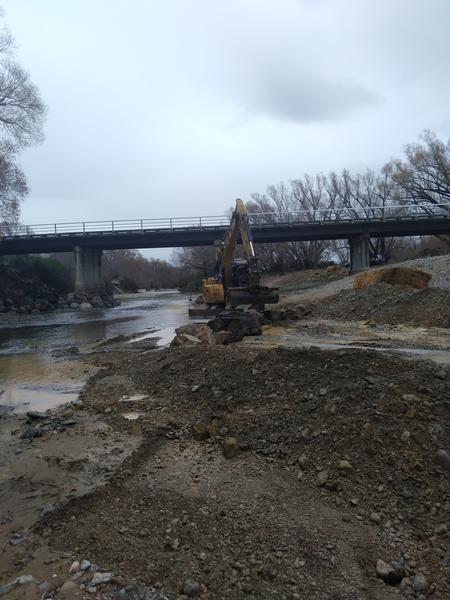 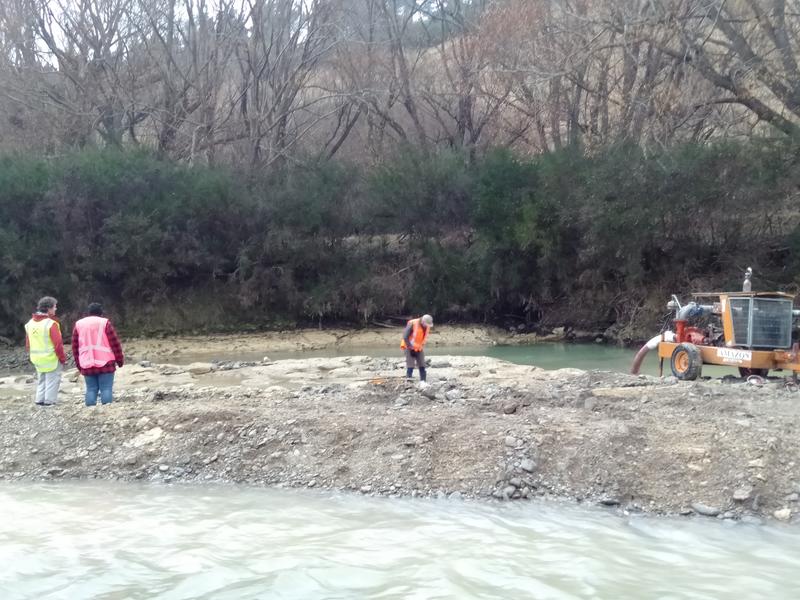 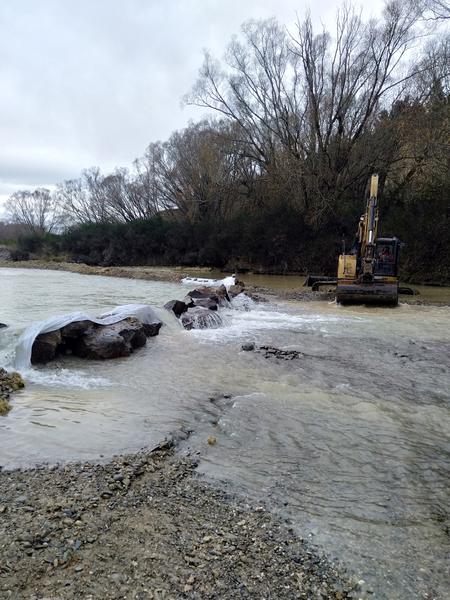 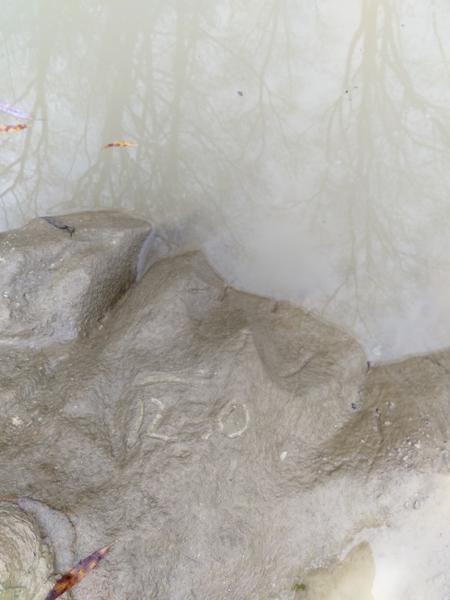 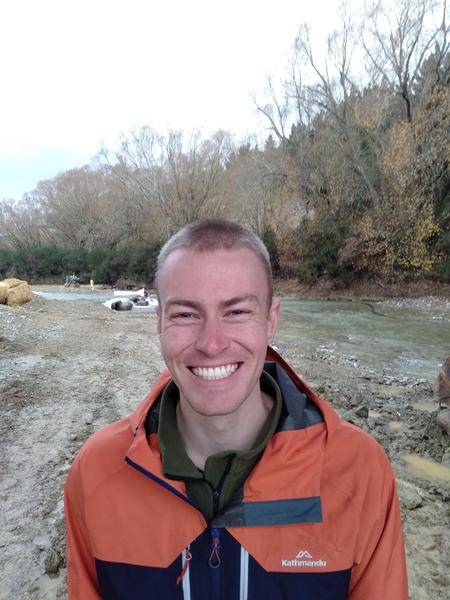 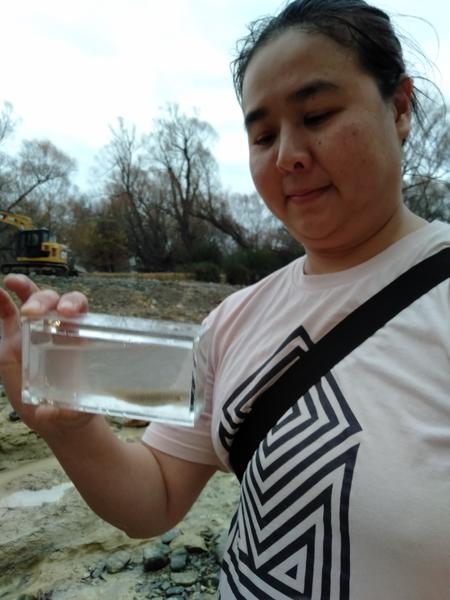 Collection Officer Natural Science at Otago Museum On Lee Lau who is rescuing the galaxiid species from the river which is being diverted and placing it in a safe pool of water.© Otago Museum 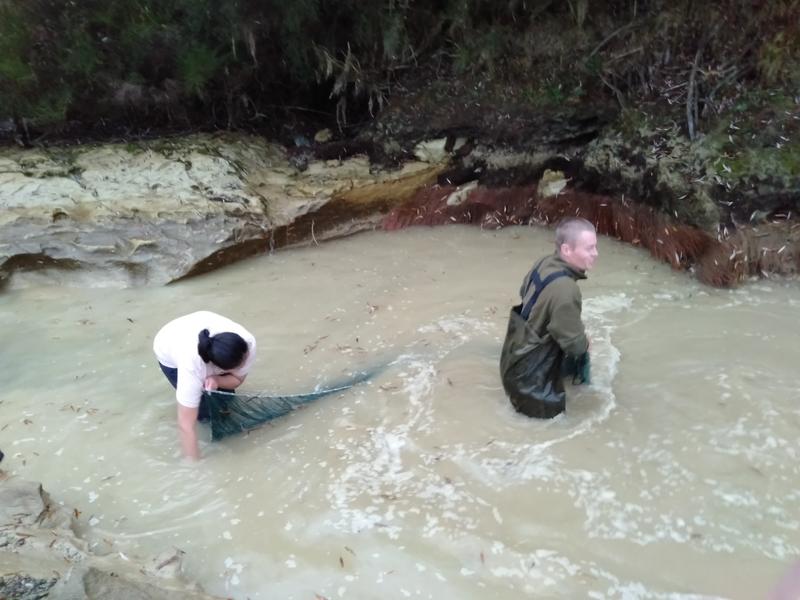 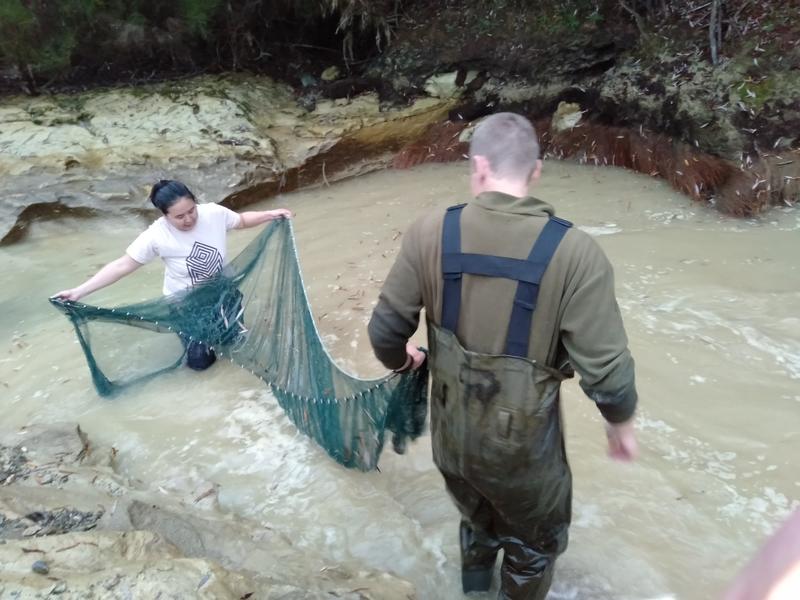 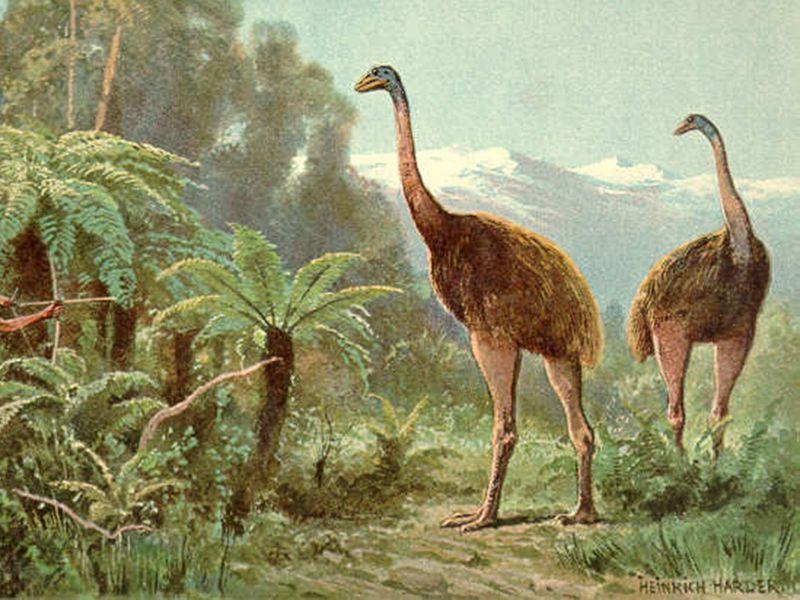 The stream and swimming hole will be returned as close to their original condition as possible after the extraction of the footprints.

They will then be taken to the Otago Museum, where they will be dried and made stable, and later put on temporary public display.

Dr Dickison said it was likely the moa would be a new species from a branch of the "moa family tree" from millions of years ago, and was most likely a medium-sized moa, which could be similar to the upland moa.

Mr Fleury said the discovery was "pretty awesome" and a career highlight for him.

"It's not every day you find moa prints in the creek."

Mr Johnston said he had never been a fossil-seeker before, but might now "walk around the hills with wider open eyes". He praised museum staff for their respect for the moa prints, and museum staff praised Mr Johnston for reporting the find to the museum.

This article was first published in the Otago Daily Times