A Stratford woman, who as a teenager was the youngest person in the country diagnosed with multiple sclerosis, is getting behind the message that the provinces are missing out on neurology services. 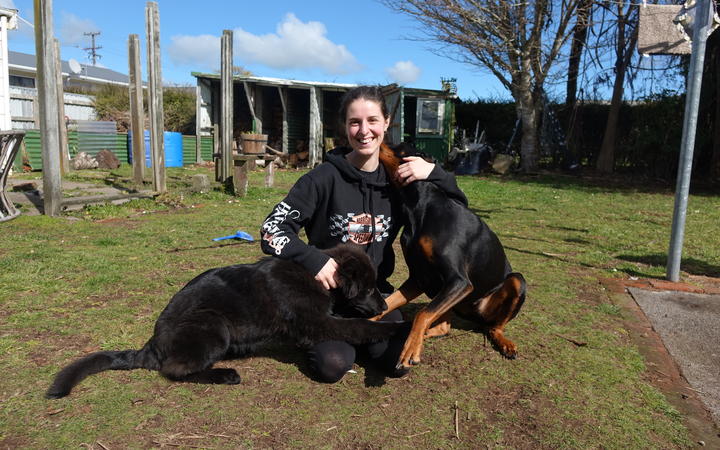 Jessie-Lee Webby with her dogs Maia, (left) and Zepp. Photo: Supplied to RNZ

They want a resident neurologist to be based at Taranaki Base Hospital to prevent delays in diagnosis and treatment for conditions such as multiple sclerosis (MS), which can lead to unnecessary brain damage.

Now almost 25, and a young mum, Ms Boylan says her symptoms arrived out of the blue.

"So I woke up one morning and I had like a numb tongue and I was like that's weird. I was like I must've just bitten it in my sleep.

"And as the day progressed it sort of moved into like the left side of my face and I was like ahh I think I need to go to the doctor cause this isn't like quite normal.

"So I went to the doctor and he didn't know and he just said 'I want you to go to the hospital'."

But that visit was not straightforward.

"When I first went to the hospital I was seen by five different doctors. They all sort of didn't know what was wrong.

"The last one said 'well we'd better get you an MRI that'll be our best bet'.

"So I waited about a month or so to get an MRI and then they told me 'if you haven't heard from your doctor in the next few days give us a call'."

Ms Boylan did not have to wait long for the phone to ring.

"And he was unfortunately the one to give me the bad news. He cried because he's my family doctor and knows me really well.

"So I went back up the hospital and got some steroids and went from there."

Just weeks later she was on medication and in a wheelchair.

Ms Boylan said the doctors at Taranaki Base Hospital did the best they could, but if a resident neurologist had been there she may have had a faster diagnosis and earlier treatment.

She said the lack of a neurologist was also a problem if she relapsed, which required urgent medication, as happened in July.

"I just kept telling them 'Can't you just look at my notes from previous relapses because this isn't a new thing for me and see what I've taken previously and just prescribe that to me'.

"I don't blame them but I just wanted them to listen and they ended up having to call my neurologist from Auckland and by that time in would've been 3 o'clock in the morning."

Graham Walker is the president of MS Taranaki and an executive member of the national association.

Mr Walker, a former farmer, was diagnosed with MS after noticing he had developed a limp - a diagnosis he had to go to Hamilton to get.

He said there were more than 4000 people living with MS in New Zealand and those living outside main centres were not getting the care they deserved. 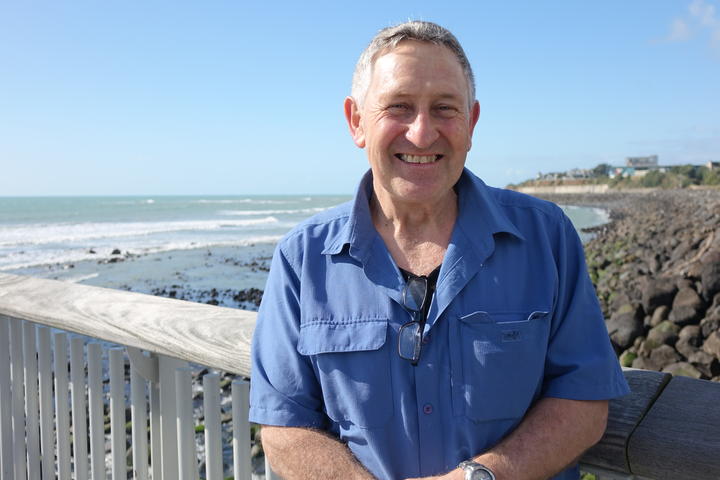 Graham Walker is the president of MS Taranaki and an executive member of the national association. Photo: Supplied

"People need to be diagnosed quickly and then get treatment quickly.

"About 80 percent of people that have multiple sclerosis have what's called relapsing remitting and I think there's about 13 or 14 drugs that can be administered to ease the issue and the sooner those people get the drugs then the better off is their prognosis."

Mr Walker said on a population basis Taranaki should have at least one neurologist who could also treat patients with Parkinson's, Muscular Dystrophy and Motor Neurone Disease among other conditions.

"Everybody should see a counsellor straight away because a diagnosis such as MS is life changing. It's like being hit across the head with a big hammer and you really need as much help as you can get and as quickly as you can get it."

Taranaki District Health Board chief operating officer, Gillian Campbell, said Taranaki had a visiting neurology service at least once a month and its general physicians were trained in neurology and had 24/7 phone access to experts in Auckland.

Ms Campbell said early diagnosis of MS could be difficult even in places where there were full neurological services.

She was confident Emergency Department staff at Taranaki Base Hospital were able to manage MS episodes, but like most EDs they were under pressure with the number of patients they were dealing with.

Meanwhile, Jessie-Lee Boylan was busy getting on with life.

"I get to stay home because my husband is amazing and understands with MS you just get really, really tired and the more run down you get the more likely you are to have a relapse.

"I guess not everybody is as lucky as me in this situation, but I think I'm pretty set for life really."

The Brain Health - Time Matters seminar is open to the public and runs tomorrow at the Plymouth International Hotel from 10am.