A Wellington woman who is losing her sight and mobility to multiple sclerosis is fundraising $100,000 to travel to Mexico for a radical stem cell treatment to fight the disease. 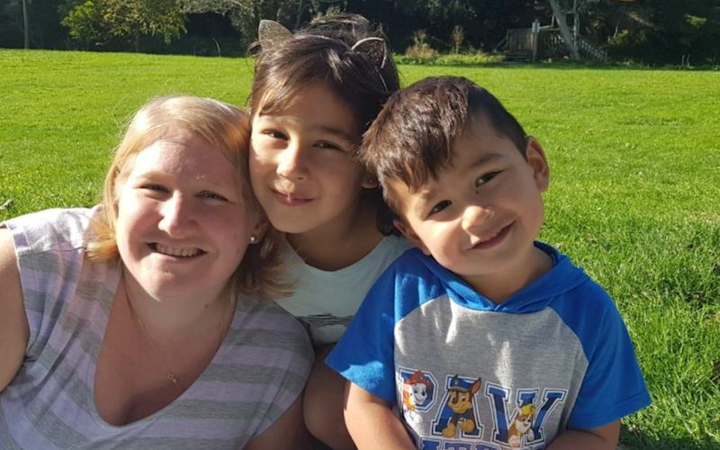 She is adding her voice to a growing number of calls to introduce the treatment here, including clinicians and advocates for patients with multiple sclerosis.

Bronwyn Hutchison, who is a sole parent, said it was a tough decision to seek the treatment known as Hematopoietic stem cell transplantation (HSCT), but it holds the promise of halting the degenerative disease, so she can remain able to care for her two young children, Sienna, 6, and Lucas, 3.

The only drug left to her to slow the disease will no longer be available once she loses her mobility, and it carries an increasing risk of a fatal brain infection the longer she takes it.

So instead she is heading to a clinic near Mexico City where she will be given chemotherapy to wipe out her immune system, before receiving an injection of her own stem cells to regrow a new healthier immune system, that will not attack her nervous system. As her immune system replenishes itself she must remain in isolation for at least four months, until it can protect her.

The former litigation lawyer said she had done her homework thoroughly, and the clinic is well respected and world-leading in this treatment.

While damage to her nervous system already caused by multiple sclerosis cannot be repaired, the clinic reports the disease progress is stopped in around 80 percent of patients.

But it comes at a hefty cost - the gruelling months away from family, the mission to raise $100,000 with supporters through fund raising on givealittle and events, and around a 1 percent chance of death from complications during the treatment.

The New Zealand health system already offers the same stem cell treatment for blood cancer patients, but not for MS.

Both Australia and Britain have begun publicly-funded clinical trials, and two years ago Multiple Sclerosis New Zealand called on the Ministry of Health to do the same.

Ms Hutchison said during a relapse where her hands felt like they were on fire for days on end she realised she could not wait. In two years she will fall outside the patient group the treatment is most successful for.

"I would hate in a year or two to have no vision, to be blind, to have my mobility affected and not be able to do anything with the kids, and to have that nagging 'what if?' - What if I had been brave enough to make that decision to go?

"In a year if I can't see, how much would I pay then to get my vision back, you can't even put a price on it."

Multiple Sclerosis spokesman Neil Woodhams said the treatment had improved in the last decade as providers narrowed the group of patients it was most effective for.

However it has not been available long enough for long-term outcomes to be clear.

"For some people, the majority of people at least, there are no further relapses, and no evidence of disease," Mr Woodhams said.

"It could mean somebody is able to continue to walk, not use a wheelchair, it could mean they could continue to work. It means that they don't have the symptoms of MS, which can be chronic fatigue, spasticity. And so getting to a stage where there's no further evidence of disease activity is a major achievement."

He said compared to the loss of independence and dignity faced by MS patients as their health declines, many found the risks of the treatment acceptable.

The advocacy organisation has asked the Ministry of Health to calculate the economic costs of MS for the country, and compare the cost of the one-off stem cell treatment with years of high-cost drugs, the drain of MS on families, patients' lost ability to work and save for retirement, and ongoing social welfare support. But Mr Woodhams said that figure was not yet known.

However in 2018 Pharmac spent $28.4 million on multiple sclerosis treatments, and the New Zealand MS Research Trust says 4000 people in the country have the disease.

"We believe it should be available through the public health system, because it is already a treatment for other conditions such as cancer, so it's not as if it is difficult to introduce," Mr Woodhams said.

"It is part of a tool-kit that neurologists in New Zealand ought to have, and people shouldn't have to raise up to $200,000 to go overseas for the treatment."

Health Ministry chief medical officer Dr Andrew Simpson said the treatment was promising and they were watching with interest, but it was still a high risk procedure.

More expert advice has been sought about the clinical evidence available from overseas.

Neurologist Jennifer Taylor knows of more than a dozen Wellingtonians who have had stem cell treatment for MS overseas, and estimates there could be as many as 100 nationwide.

She said the treatment was not a cure, and some patients found the disease progression restarted a year or two after the treatment.

"Overall the MS-neurologist community in New Zealand and internationally think it is a treatment that we would recommend for some patients with MS, but not necessarily all patients with MS.

"It is a very strong treatment, and we have other treatments that work."

The Wellington doctor is among a group of neurologists working with the Ministry of Health with the hope of introducing the stem cell treatment here.

She said it is scheduled as one of the main topics for a meeting in October between ministry representatives and haematologists - the clinicians who would deliver the treatment.

Ms Taylor hopes it could be available in New Zealand to MS patients within five years, but said the main barriers are funding and staffing for the already busy hospital departments that would offer it.

However, Bronwyn Hutchison does not have years to wait. She has to act now to have a chance to fight the disease.

Since April, she and her supporters have held raffles, comedy nights, shaved their hair, and sold movie tickets, to raise $66,000 towards her treatment, travel and costs during recovery.

She said it was uncomfortable asking for help, but she needed to fight for the chance for more good years with Sienna and Lucas, and hopefully to even get back to work.

"It's a lot of money, but so is the cost to society and the personal cost of having multiple sclerosis ... my current drug is around $30,000 a year.

"Raising $100,000 for people to go overseas, it's just awful, because you're balancing that against the fatigue of trying to live with MS, and that extra stress isn't good, and for a lot of people it's just not realistic. I've been very fortunate to have the support of family and friends and the community, and my fundraising is going well, but some people just don't have that option.

"And I can't imagine feeling so trapped when you know there's hope out there. I'd definitely like to see the government look into introducing it into New Zealand - this is the best available treatment for certain people with MS."

Ms Hutchison hopes future MS patients will be able to get that treatment closer to home.