Some Canterbury homeowners are worried that missed earthquake damage to concrete slabs could result in another big bill for the taxpayer.

It comes only weeks after EQC told Checkpoint the cost of mis-scoped damage or defective repairs following the Canterbury earthquakes could cost up to $1 billion.

This includes $450 million for botched repairs - including badly repaired rubble ring foundations - and $300 million for an ex-gratia payment to about 1000 over-cap onsold homeowners.

But some Canterbury homeowners who bought after the earthquakes - and did their due diligence - are only discovering damage to their concrete slab foundations now.

Tracey Glass hoped her 320sqm West Melton Home, purchased in 2014, would have escaped lasting earthquake damage being out of the city.

"Our perception at the time was the West Melton area was relatively unscathed, post earthquake," she told Checkpoint.

Tracey got a building report prior to moving in - it said there was nothing wrong with the slab other than some minor cracking in the internal garage.

Everything was fine - until, that is, she went to renovate her ensuite in June this year.

"We were contemplating maybe trying to sell this coming spring [and] decided to freshen up the ensuite," she said.

"The floor layer came in and pulled up the existing flooring, and at this time the cracks in the foundations were discovered."

The cracks spread over the floor like a spider web, some clearly wide and deep - part of the slab under the shower has collapsed.

Cracks were also discovered down the hallway in a bedroom wardrobe.

The claim has been reopened with EQC, and Tracey's getting the slab properly assessed in the meantime.

But it wasn't highlighted on the initial scope as it could not be seen.

"They would have no way of knowing what was under the flooring ... to the naked eye you would see the rest of the house is fine."

The house is liveable, but Tracey is concerned about what it means longer term - both in terms of the house's ability to cope with any future quakes and its resale value. 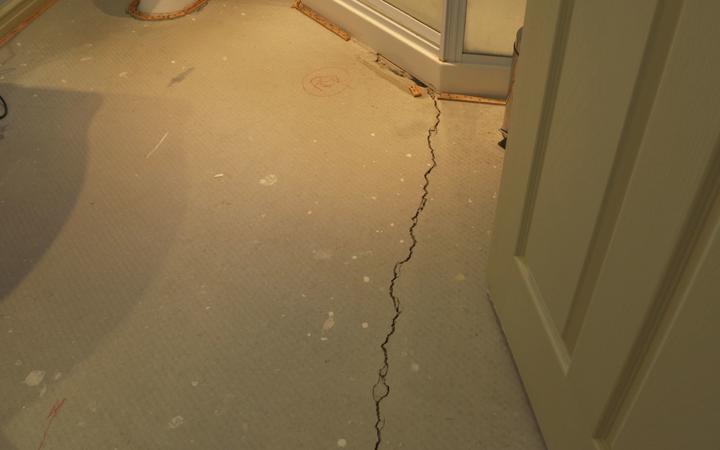 South of Christchurch, in Rolleston, Bradley and Chris have found themselves in a similar situation.

They went to renovate in 2016 but found cracking through the lounge, kitchen, hallway, and bathroom. It had only been partially fixed after the earthquakes.

They too have gone back to EQC and are working through their next steps.

"Our concern is that in the next ten years the house could subside, crack further, it could affect the plumbing ... it could become an issue long term," Bradley said.

Checkpoint has spoken to several others with the same situation.

EQC would not supply the number of properties they knew of that had newly discovered concrete slab damage, saying it wasn't easily searchable.

Checkpoint also asked the Christchurch City Council and Selwyn District Council if they could say how many properties in their districts had concrete slab foundations. This information would be in individual building consent files.

Mr Richards, who has been in the industry for almost two decades, said he was regularly seeing homes with concrete slab foundations with undiscovered earthquake damage.

He said if homeowners discovered cracking in their slab foundations that looked like earthquake damage, they should get in touch with EQC right away.