While many may have been lamenting the All Blacks failure last weekend, another New Zealand sporting side is hoping to give disillusioned kiwis a team to believe in. 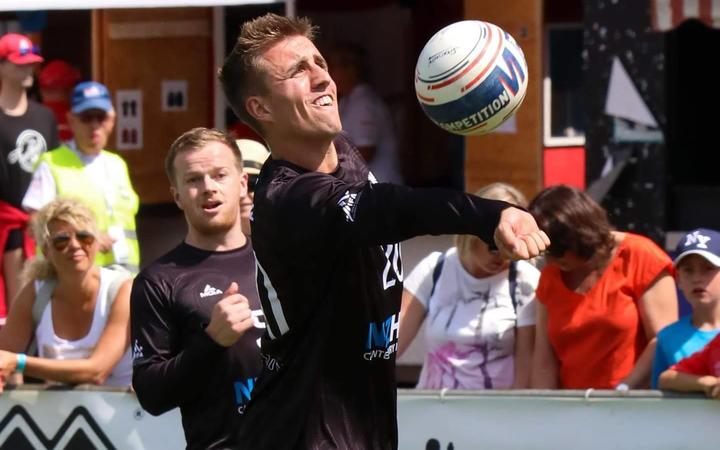 The New Zealand men's fistball side are off to the roaring start at World Championships in Switzerland, having won three of their first four games.

It is a massive achievement for a side that only started playing the game two-and-a-half years ago.

For those scratching their heads, fistball has been described as volleyball's estranged cousin.

Stretched over a field that is 50 metres long and just under half as wide, a fistball pitch is divided in half by a two-metre high net, with five players on either side.

Like volleyball, teams can pass the ball three times before sending it over the net. However, players can only hit the ball underarm with a closed palm.

Fistball is a game that only makes sense when you actually see it being played.

For Hillview Christian School associate principal Blase Dowall, it was seeing a YouTube video that piqued his interest in 2017

When he caught wind that had Australia already set up a team, he knew he would have to follow suit.

"I was getting towards the end of playing another sport I was involved in I wanted to do something new and discovered the sport, discovered the Aussies were doing it and thought, well, if they're doing that we have to have a team to go and compete against them.

"I spoke to some colleagues it at school and they spoke to friends and families and the first men's and women's fistball team was formed three years ago."

Dowall - who is now the president of Fistball New Zealand, as they began with just ten players - said it was a slow start.

Since then, he has helped grow the sport to the point where it is played across the country.

There are nine clubs in Dowall's native Christchurch alone.

The teams have played regular tournaments against Australia but found regular international competition in Oceania difficult to get.

Dowall also doubles as the captain of the men's side competing in Switzerland.

Going head to head against the European countries where fistball was king had been the ultimate challenge for the side, he said

"At the top level with the Europeans we're playing against, the majority of them have been playing fistball since they were five years old.

"So that's what we're coming up against."

But the wily New Zealanders are not to be underestimated - as an experienced Serbian team found out after their first encounter.

"[The game against Serbia] was a bit of an epic struggle really," Dowall said.

"We played best of five sets, and we won the first, they won the second and we continued like that through to a fifth set where we eventually won 12- 10 so it was a very close match.

"We were down 5-1 in the final set. So was a little bit nerve wracking but the guys kind of helped the nerve and came through and got our first win."

Diehard fistball fan and member of the New Zealand women's team, Melanie Vannoort, has been following the world championships closely, tuning in via hazy Facebook livestreams to watch the New Zealand men compete.

A lifelong volleyball player, she said she was dragged along to a game by her sister two and a half years ago and had since fallen in love with the sport.

"I can't get enough of it. I never thought I'd say that, but it's definitely become my major sport and something I want to do really well and just make the most of it."

She applauded the men's victory against Serbia, which she said was impressive considering the team's preparation - or lack thereof.

"In New Zealand our men's team are all the competition they've got," she said.

"They can play against themselves every single day. But you never really know what playing against Serbia is going to be like we've never versed them before."

The men used their dark horse status to their advantage, she said.

"They're very lucky, I think to be able to watch Serbia before the game they [were able to] to see the top dog, they could see their weaknesses and really work with that."

After three wins against Serbia, Belgium and Poland the New Zealanders have found themselves through to the final twelve.

With the competition expected to ramp up in coming days, the New Zealanders will be outsiders to make a run at the title.