A New Zealand Food Safety spokesperson is warning people who like chicken feet not to eat any intended for pets as they may get sick. 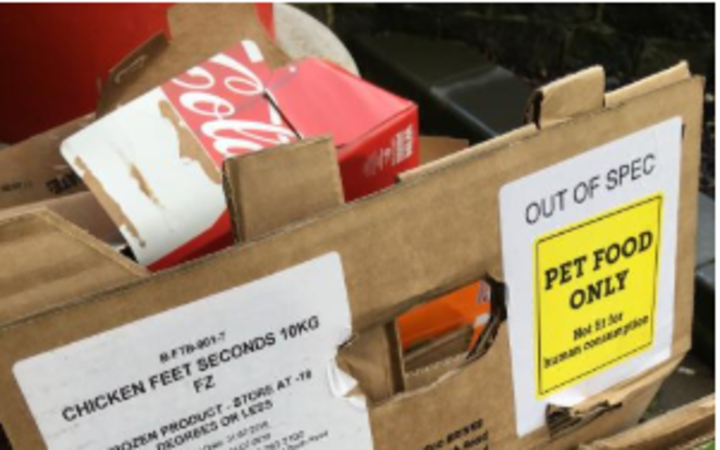 A woman in Invercargill became concerned on Monday when she discovered a box in a restaurant's recycling labelled "not fit for human consumption". Photo: ODT/Laura Smith

A New Zealand Food Safety spokesperson is warning people who like chicken feet not to eat any intended for pets as they may get sick.

For many Chinese people, chicken feet and pigs' ears are considered delicacies, but some New Zealanders might think differently.

They are not uncommon in Chinese restaurants - they can be steamed, braised, pickled and made into a cold dish with chilli and vinegar.

The Invercargill City Council said they'll be talking to one local restaurant after it appeared to have served chicken feet labelled "pet food".

The diner in question was Hong Kong Restaurant in Invercargill, where a box put out for recycling was spotted, which was labelled "chicken feet seconds", "pet food only" and "not fit for human consumption".

A council spokesperson said its environmental health team visited the restaurant after a photo of the box was brought to their attention, and they were told the items were for personal use only.

"Council staff reminded the operator that, as per their Food Control Plan, the only food that should be stored and prepared on-site is food which is for sale to customers. This means they must ensure any food being delivered to their restaurant is intended for resale."

The spokesperson said they would be contacting the restaurant again because it "has provided different information to media than what they gave to council staff during their visit".

RNZ has spoken to Lisa Wang, who has been operating the buffet restaurant in Invercargill for 12 years. Her words have been translated.

"We don't sell them, we don't provide them, we don't have them on our table. They aren't on our menu either. This is part of Chinese culture - we love it. Our seniors at home love it, too, so they asked us to get some and we all ate," she said, adding that she didn't understand why people were "making a big fuss about it".

The box had a Van Den Brink Poultry label.

"The B grade can be dirty, blemished and contain feathers. They wouldn't be a safety issue as such, but a quality issue. Imagine getting a mouthful of feathers wouldn't be ideal."

Mr Lawrence also said there was a significant price difference between the two grades.

A New Zealand Food Safety spokesperson said pet food was not intended for humans to eat.

"There are rules for labelling. If a product is labelled as unfit for human consumption, it must not be sold to humans for their consumption. There are a number of offence provisions that would enable officers to take enforcement action against this sort of activity if required."

The spokesperson said if a consumer knew the product was labelled unfit for human consumption, but still chose to consume it in a private setting, the Food Act rules did not apply, but they recommended people did not do this to avoid getting sick.