Much of the North Island has been hit by thunderstorms over the last two days - and with the chance of more today, here's what you should - and shouldn't - do. 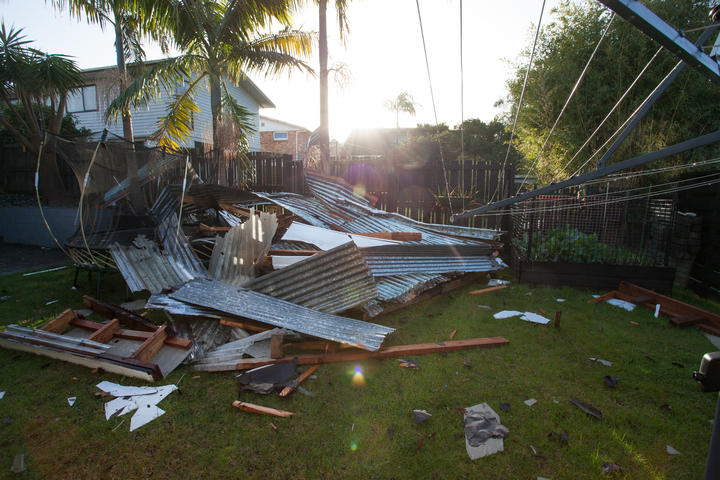 The aftermath of the tornado in St Heliers, Auckland, on Sunday night. Photo: RNZ / Claire Eastham-Farrelly

Central Auckland was hit by a huge thunderstorm, for a second night, following the tornado that ripped through St Heliers on Sunday.

And yesterday morning in New Plymouth a tornado slammed a woman into the side of her house leaving her with a suspected broken collarbone.

The storms formed in the Tasman Sea over the past few days, and some moved onto northern and central parts of the country bringing the strong wind gusts, lightning and thunder, brief heavy rain and hail.

According to NIWA principal scientist Chris Brandalino the first rule of thunderstorms is to stay inside - and if you're outdoors, stay off the water and take care where you shelter.

If you have to go outside "you're rolling the dice", says Chris Brandalino. "Your best scenario's just to wait it out."

If you're outside, stay away from the water - and lone trees

"You don't want to be in an open field, because again you're the tallest thing out there.

"You don't want to seek shelter under a lone, single tree, because odds are potentially lightning could strike that tree."

When you're inside a building there are a few things to remember. Stay away from windows - it's safer to be in the interior part of the room.

Avoid showers and baths. Water generally has ions that can attract or conduct electricity, so don't take a showers or bath while there's lightning, in case it strikes the house.

You can answer the cellphone but ignore the landline, he says. "Thunderstorm hits a telephone pole - that can go through the landine and impact you. With cellphones, obviously that's not an issue."

"You basically want to be in a well built interior part of your room," says Chris Brandalino. That could be even be a bathtub or closet.

"It's not the winds that kill people or injure people during a tornado it the flying debris," he says.

"If things get real gnarly, if winds get really intense - a basement is the safest place to be."

If you don't have a basement, and there's enough time, then grab a mattress or pillows and head to the bathtub and put them over your head.

The tornado in Taranaki on Monday morning showed what could happen in a localised storm, he says.

"Small tornados can cause damage - its just in a small area."