Almost 50 boats were damaged or broke their moorings and a shipping container was blown onto a car when a wind blast - being described as a tornado - hit Auckland. An upturned catamaran on Tuesday at Westhaven Marina where strong winds hit during a thunderstorm on Monday night. (PHOTO: RNZ / Liu Chen) The Auckland waterfront on Tuesday morning after a wind blast being described as a tornado sent a ferry adrift, and blew shipping containers into the sea. (PHOTO: RNZ / Liu Chen) 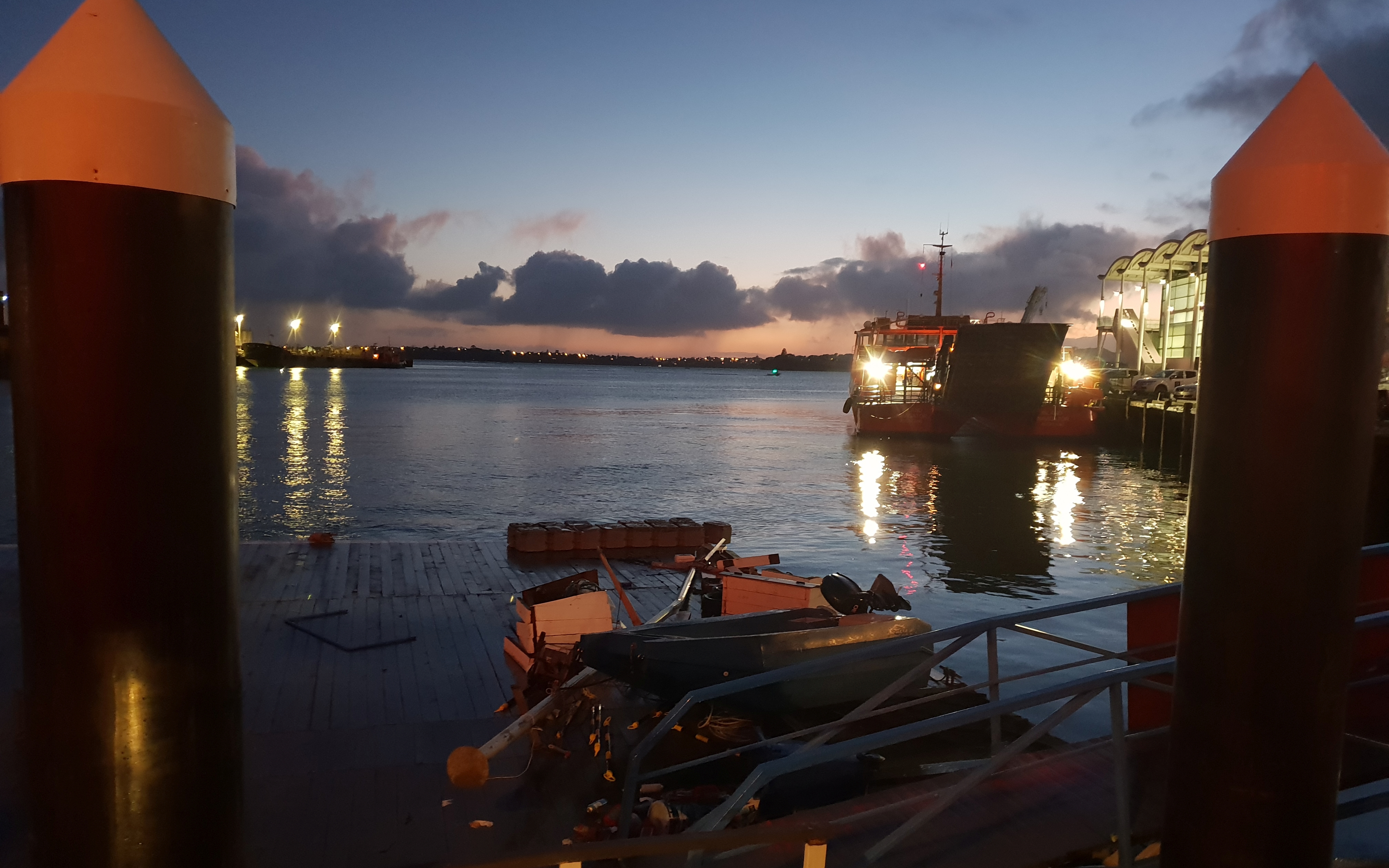 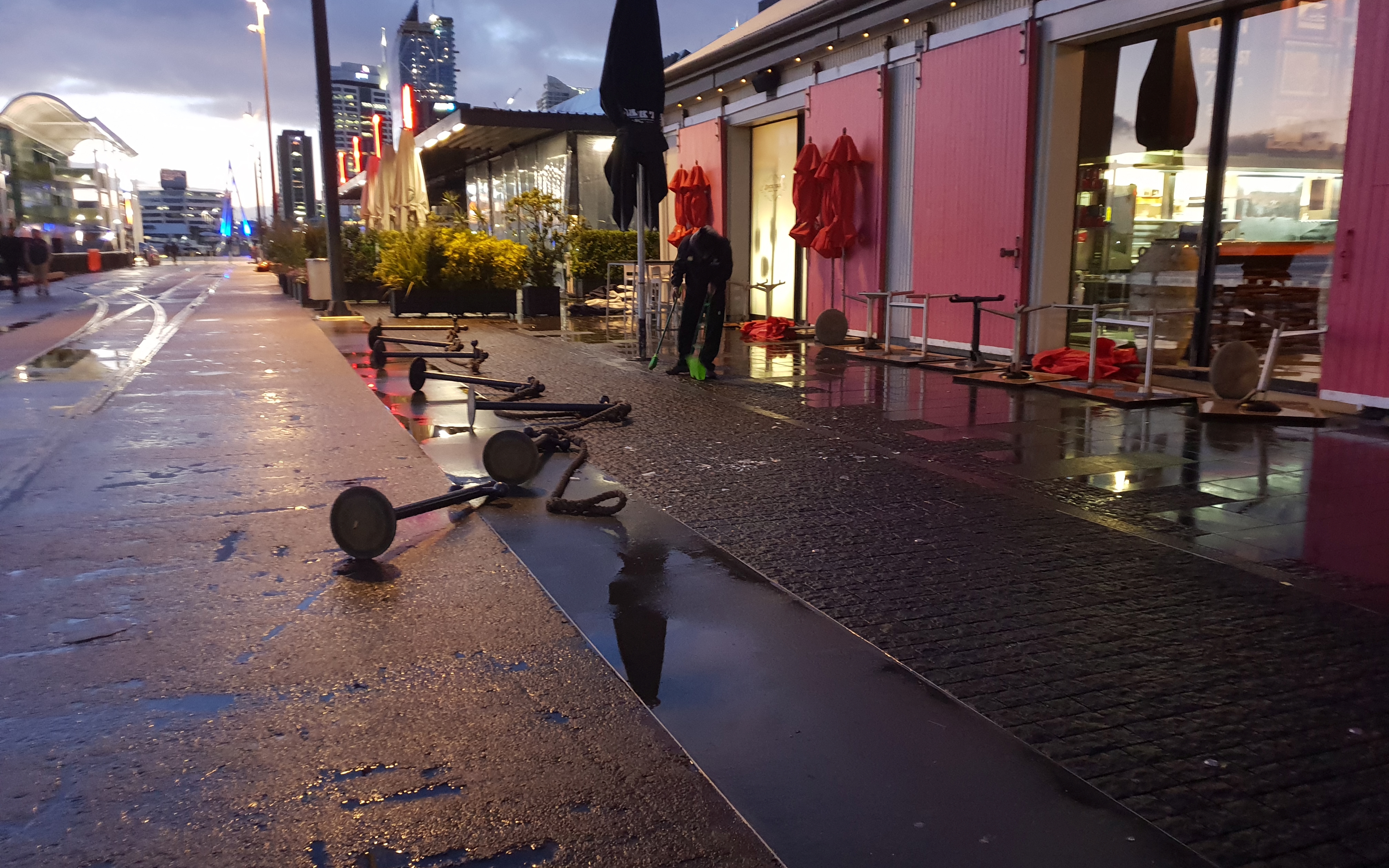 Businesses in Wynyard Quarter were cleaning up after the storm. (PHOTO: RNZ / Liu Chen) 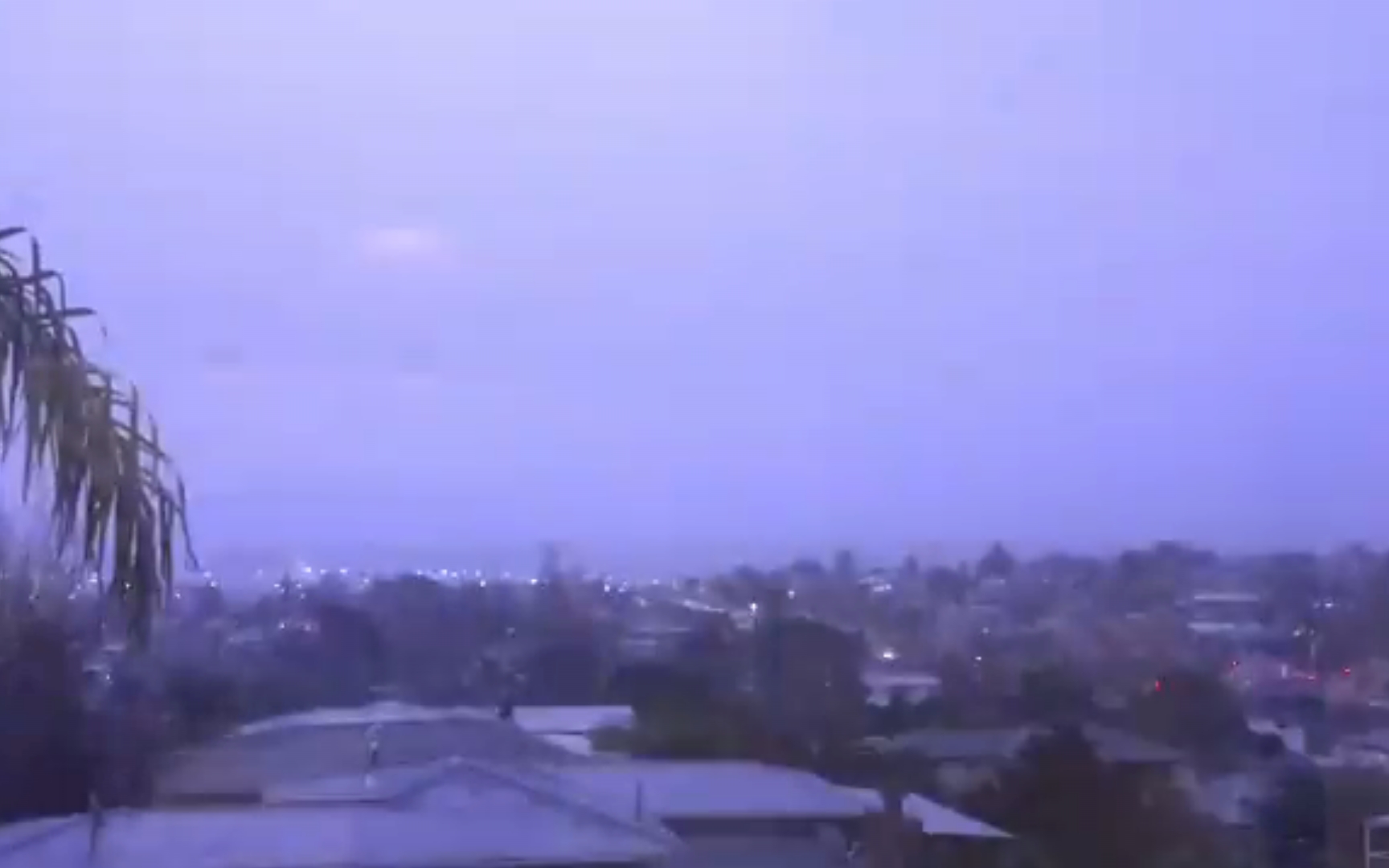 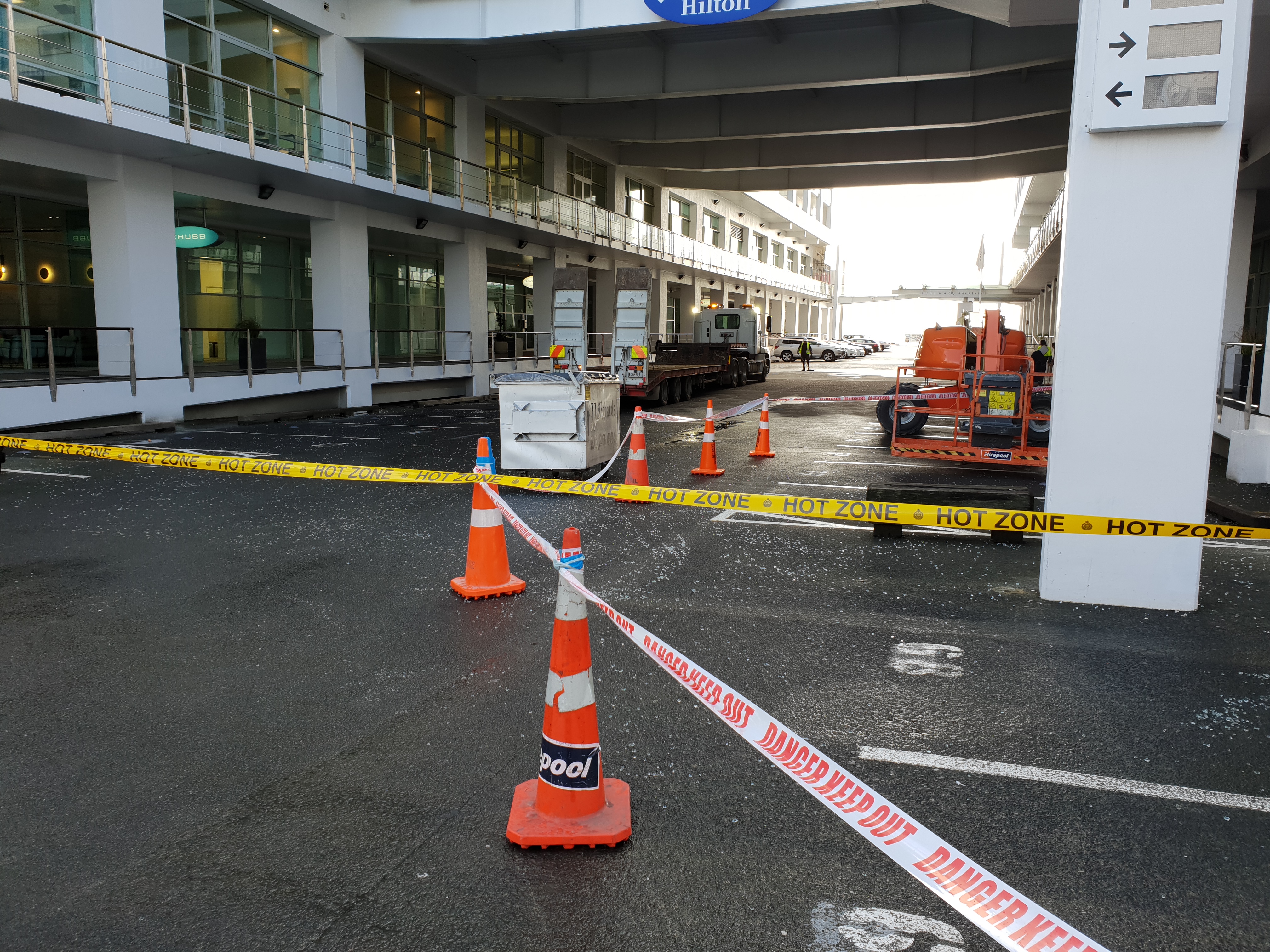 Part of the wharf by the Hilton Hotel on the Auckland waterfront sealed off on Tuesday morning. The Great Barrier Island car ferry broke its moorings near the wharf. (PHOTO: RNZ / Liu Chen)

Police said a container blew off a stack of containers on Jellicoe Wharf, at the Ports of Auckland, on Monday night hitting the side of a car and trapping a person inside.

Fire and Emergency spokesperson Daniel Nicholson said they were called at 9.57pm, and managed to release the person within half an hour. St John Ambulance said it took one patient to Auckland Hospital in a moderate condition from Ports of Auckland.

The Great Barrier Island car ferry broke off its mooring line and at least two yachts sank in their berths.

Harbourmaster Captain Andrew Hayton said a 50 foot catamaran capsized and took out a fuel bowser at the entrance to Westhaven Marina. A small amount of diesel spilled but it has since dispersed. 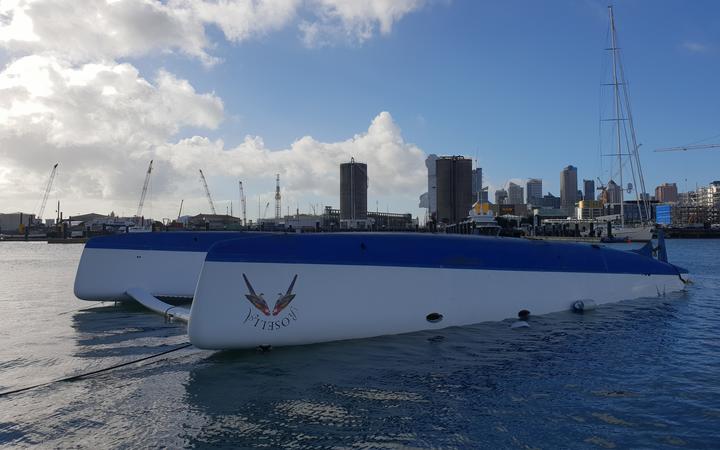 Mr Hayton said there was minor damage to wharves and pontoons from North Head to the Harbour Bridge.

Auckland Council said almost 50 boats were damaged or broke their moorings in the storm.

The police maritime unit was called out to the Great Barrier Island car ferry that broke its moorings and was in danger of smashing against the seawalls just off the Hilton Hotel on Princes Wharf, he said.

Ports of Auckland tugs and the Coastguard were scrambled to move it back into the Wynyard terminal. 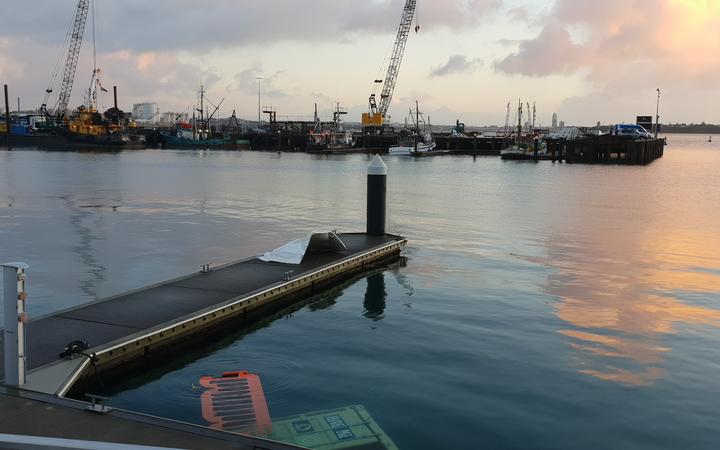 Debris in the water at the Auckland waterfront on Tuesday morning after a wind blast sent a ferry adrift and blew shipping containers into the sea. Photo: RNZ / Liu Chen

Volunteers helped secure other vessels, including a superyacht, and in removing debris.

"There were lots of reports coming into us ... various pieces of debris adrift and around the place, portacoms and shipping containers, cars had fallen off the wharves," Mr Manaena said.

"Some people have called it a tornado, other people are calling it a thunderstorm gust, but whatever you'd like to call it it was very strong winds which has caused a significant amount of damage in and around the Auckland downtown area particularly the Westhaven Marina/Viaduct Harbour area."

A car was submerged at the entrance to the Viaduct Harbour, he said. 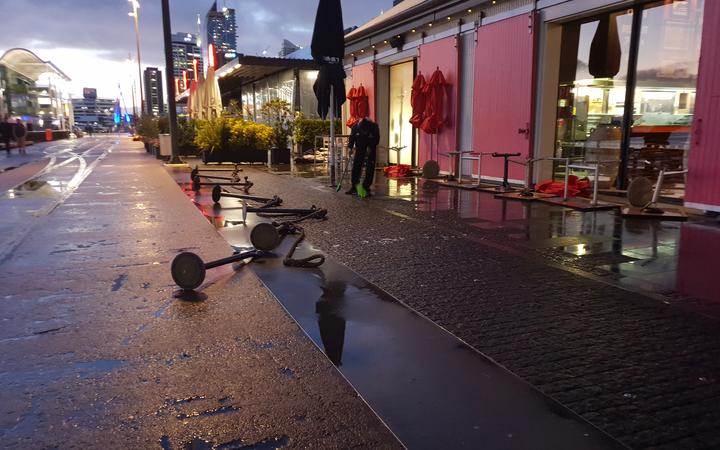 Businesses in Wynyard Quarter were cleaning up after the storm. Photo: RNZ / Liu Chen

At Wynyard Quarter local businesses are cleaning up after being lashed by strong winds overnight.

Fences, tables and pot plants have been blown over and strewn across the roads. 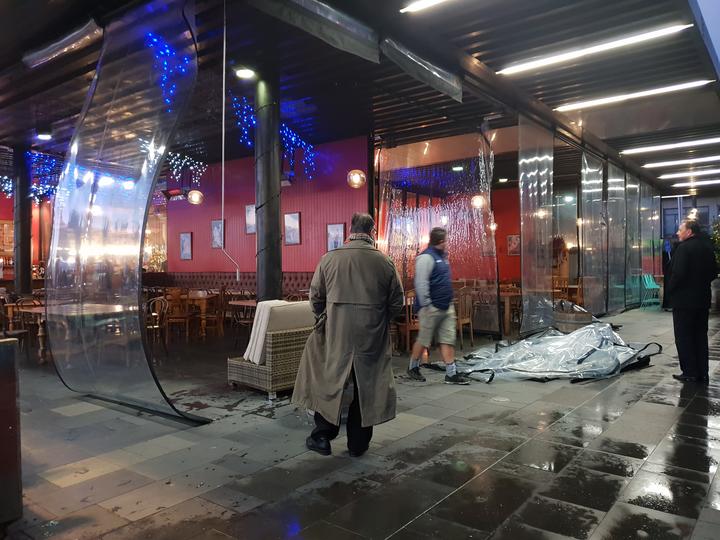 Cafe owner Kubilay Hepozden said it was the worst weather he had seen in eight years at his Viaduct Harbour business.

He said they had just cleaned up after Sunday's tornado when the strong winds hit again last night, wrecking plastic screens and doors.

In the water opposite, debris was visible spread across the harbour.

Hemi Manaena said in his experience with the Coastguard nothing came close to the sort of damage this weather event had done to this amount of vessels.

"Westhaven Marina is the largest marina in the southern hemisphere, and the photographs that have come through to us show quite extensive damage to the infrastructure, as well as the boats.

"Had it ripped through that area in the middle of the day, there might certainly have been a different outcome."