An Auckland man says he's just thankful there were no injuries last night after a violent tornado suddenly blew in his front door and lifted his roof as his family were watching television at their St Heliers home. 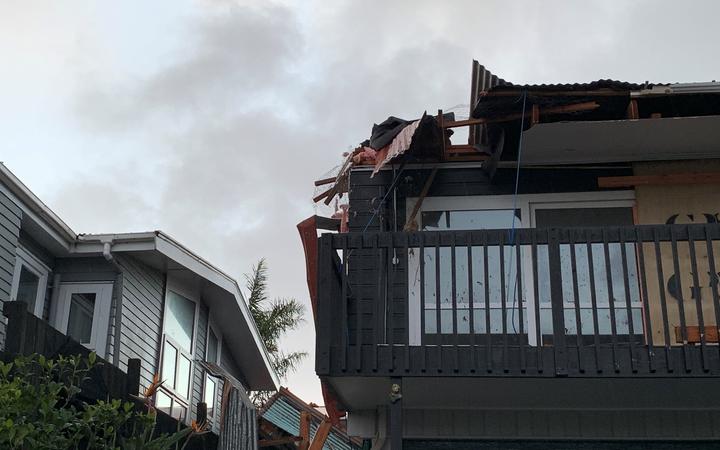 Damage to Craig Hawkins' house in St Heliers after a storm ripped through the Auckland suburb on Sunday night. Photo: RNZ / Katie Scotcher

Craig Hawkins had settled in for the night with his two sons, Billy and Mikey, on Ashby Avenue when the small, intense tornado touched down between his house and his next-door neighbour's at about 9pm last night.

He told Morning Report his property looked like a 'war zone' when he woke-up this morning. 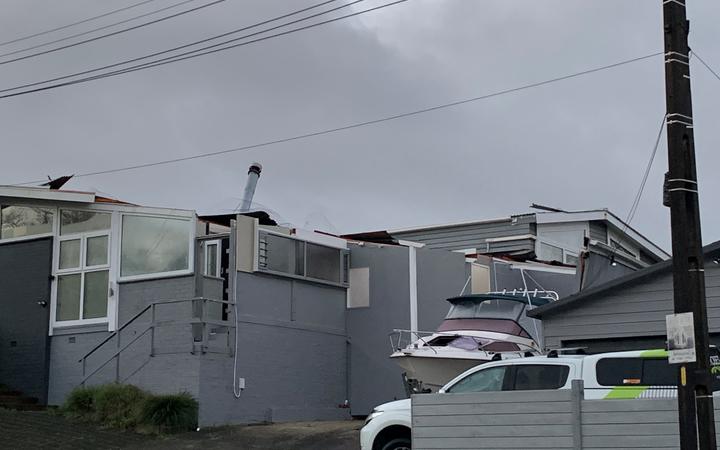 A roof of one home was severely damaged and had partially blown off. Photo: Katie Scotcher

The tornado had left the household with no power, after it severely damaged one side of the roof, smashed windows of his living room, ripped off sliding doors and blew down all his boundary fences. Mr Hawkins said half of his neighbour's roof had ended up in his back yard.

During the incident, which Mr Hawkins estimated lasted just 10-to-15 seconds, his two sons ducked for cover as the menacing rumble reached a destructive crescendo, with one of them hiding under the dining room table.

Ashby Ave in Saint Heliers this morning. The owners of the two houses severely damaged by a tornado last night are just starting to assess the damage now pic.twitter.com/x3cyYlPVtg

"The place looks like a war zone to tell you the true, it's a shambles. There's debris everywhere, so a big clean-up job ahead of us I guess," Mr Hawkins said.

He said he hadn't slept much and was still adrenalised since the drama of the previous night, knowing the extent of the clean-up ahead of him.

"My first mission this morning is to arrange some electricity. We have no power because a tree at the front of the house on the road ripped all the powerlines out when it fell.

"It was a hell of an experience, of the whole front door getting blown off into the lounge, when we were just sitting watching television." 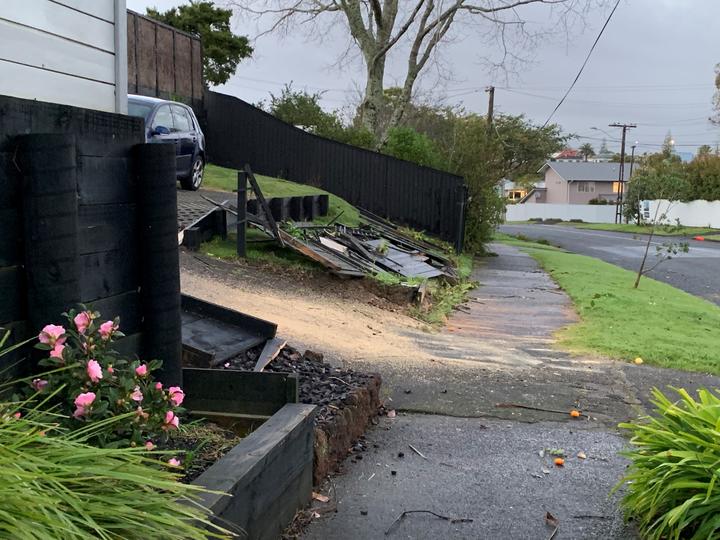 Police said they received a report of a trampoline hitting a car on State Highway 3, north of the city. No one was injured.

They also said they had received reports of a section of roofs coming loose, and power lines coming down in the same area.

About 900 properties in and around New Plymouth have been affected by power cuts.

The power went out at about 9.20am in the Waiwhakaiho and Lepperton suburbs of the city.

MetService meterologist Peter Little said the weather radar had shown signs of a possible tornado in the area and that further strong winds expected could cause significant damage.

Meanwhile, the extent of damage to The Cloud events centre at Auckland's Queen's Wharf has yet to be determined.

Last night the the distinctive PVC doom of the events centre - build in time for the 2011 Rugby World Cup - lifted and some of it was reported to have blown into the harbour.

This morning security guards were patrolling outside the building as a cordon stopped the public from entering Queen's Wharf.