Hundreds of thousands of dollars set aside by the government to support Vietnam war veterans and their families is going unspent. 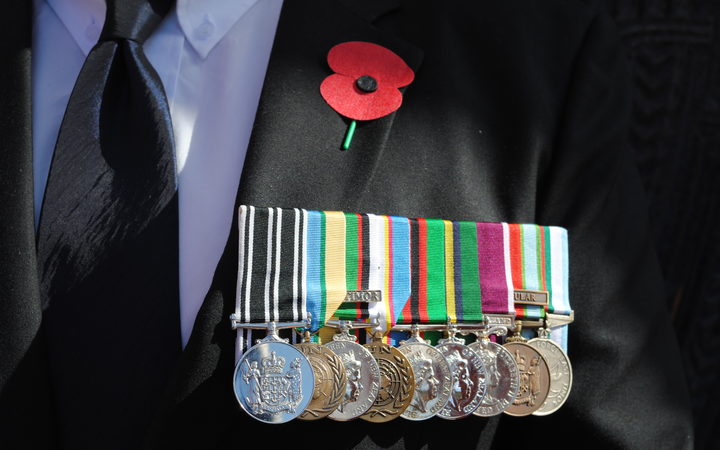 Remembrance poppy and medals on a veteran at the 50th commemoration of the Vietnam War held at Pukeahu National War Memorial, Wellington, in August 2016. Photo: RNZ/Kate Pereyra Garcia

The Defence Force is making more effort to track down veterans, who are famously reluctant to come forward and ask for help.

The government has budgeted $1.1 million a year for the past three years to help Vietnam veterans.

A Vietnam vet and national vice-president of the RSA, Bob Hill, said some veterans struggle to say they need help.

"You'll always have one person who will stand there and will always stand there with their hand out and then you'll have the other ones who will turn around and say 'I'm all right - give it to somebody else - there's somebody in more need than myself'," he said.

He's unsure why the uptake of annual medical assessments was low - but said some just want to shut the past out.

"I served with a couple of guys and they've basically gone bush since they've come back for the last 50 years," he said.

Vietnam Veterans' Association president Andy Peters served from May 1969 to May 1970.

He's had prostate cancer and a hip replacement - and puts that down to his 21 years in the military.

"You're carrying in excess of what - 40 pounds just on your back - and the machine gun I carried was about 24 pounds," he said.

He got assistance and urges his fellow former comrades to do the same.

"For a lot of us including myself - we're stubborn - we've got a lot of pride - we won't ask for help.

"But now, like myself, I'm in my 70s - I'm realising now that hey, we are entitled to some assistance for what we did," he said.

Veterans' and Defence Minister Ron Mark said he had pushed Veterans' Affairs to track down former personnel who aren't registered with them - or people with incomplete data - so they can be chased up and cared for.

And there have been health expos where former personnel can get a check-up and support.

"Veterans' Affairs have taken the nudge - they are now far more proactive - and we are getting better returns and far better information as to where these veterans are," he said.

He said he had agreed to put two chunks of the unspent money into the Vietnam Veterans and Their Families Trust, along with the Veterans' Medical Research Trust Fund.

And he said he would bid for more funding if demand from veterans increases.