A Hastings District Council rule banning councillors' campaign cars from being parked in council carparks is "a bit silly", a mayoral candidate says. 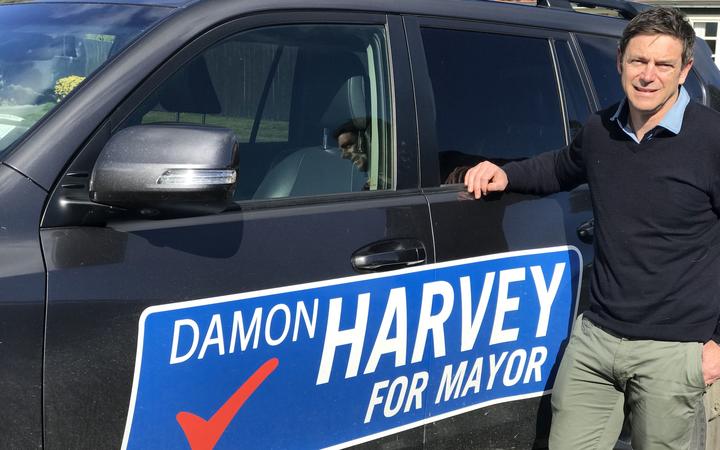 Damon Harvey said he and other councillors were told they were not allowed to park sign-written cars after he parked his own car, featuring his campaign slogan, at the council carpark while attending meetings all day last Tuesday.

"It's a bit of a silly rule. I was there all day on council business and I don't think it's giving me any advantage."

Council rules stated that council resources could not be used for campaigning purposes. Those resources included council-owned or controlled property.

"Council would be directly promoting a member's re-election prospects if it allows incumbent elected members to use council resources explicitly for campaign purposes. This includes all council communications facilities such as council branding, stationery and postage, social media channels, and communications devices," election protocols issued by Hastings District Council stated.

While he had no issue with using such resources, it shouldn't apply to a carpark, Mr Harvey said.

"The carpark is quite tucked away behind the council building. Ironically, by forcing me out onto the road it's actually giving me better exposure because a lot more people will be seeing the vehicle."

The only downside was he would have to move it every two hours to get around parking restrictions in Hastings, he said.

"What if I'm attending meetings at a library or a community centre? Am I not allowed to park there as well?"

Other councillors were now thinking twice about getting their cars sign-written for the upcoming elections, he said.

Hastings District Council said it was standard practice during an election not to allow councillors to park branded vehicles in their allocated councillor car park.

"This could be deemed as using a council resource to advertise their election campaign, and gaining an advantage not available to other candidates who are not current councillors," council election officer Jackie Evans said.

"All Hastings councillors have been advised that if they have a branded vehicle for the purposes of the election campaign they should park away from the council offices whilst attending meetings or conducting other council business. If they park in a pay and display carpark as part of their council business they can claim back on their ticket."

Vehicle branding does not count as an election hoarding, but it does count as election campaign advertising, Ms Evans said.

Local government expert Andy Asquith agreed it did seem a bit silly but it was possibly a grey area of the law.

"You could argue that it's taking things to the nth degree."

Local Government New Zealand said it could not comment on individual cases, but it was the statutory role of the Electoral Officer, or chief executive, to interpret this principle in relation to each specific situation.