Around 50 animal rights activists in Napier are protesting against sending nearly 5500 live cattle on a ship to China. 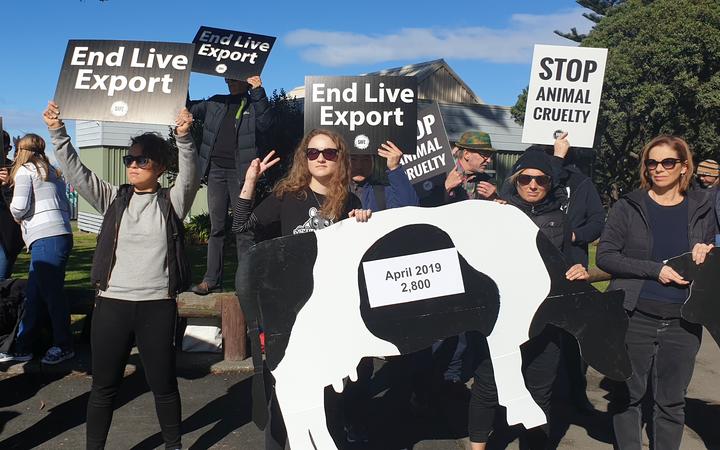 Protesters make their views known during loading of live cattle at the port of Napier. Photo: RNZ / Anusha Bradley

Save Animals from Exploitation, or SAFE, is organising the protest at Napier Port, and said it is the largest export of cattle for two years.

The Yangtze Harmony was set to leave the port around midday, packed with thousands of animals, despite the government ordering a review into the live export trade in June.

SAFE's campaigns officer, Mona Oliver, said all exports should be halted while that review is going on.

She said China has lower animal welfare standards than New Zealand where the cows are likely to end up in concrete factory farms, and slaughtered by methods so cruel they aren't allowed in New Zealand.

However, the Ministry for Primary Industries said it is satisfied that strict animal welfare requirements will be met throughout the journey. It will also require the exporter to report on the animals' welfare for a month after they arrive in China.

The Minister of Agriculture, Damien O'Connor, has asked for a review of the live export trade. He has asked MPI to consider all possible options which he will submit to Cabinet.

The MPI's director of animal health and welfare Dr Chris Rodwell said it was a complex topic and several aspects, including animal welfare, public expectation, international trade commitments and the impact on rural New Zealand, would be looked at.

"Until the review is completed, MPI is required to assess applications for exports and approve acceptable applications as there has been no change in the law. We cannot predetermine the outcome of the review and have to follow the current law," Dr Rodwell said.

He said MPI carries out a thorough pre-export certification process, which includes observing the animals at port, ensuring the vessel is suitable for the job, and confirming the expertise of the stock handlers on board.