The High Court has been told no Great Barrier submitters actually asked for hearings to be held on the island about controversial plans to dump more sludge offshore from their homes. 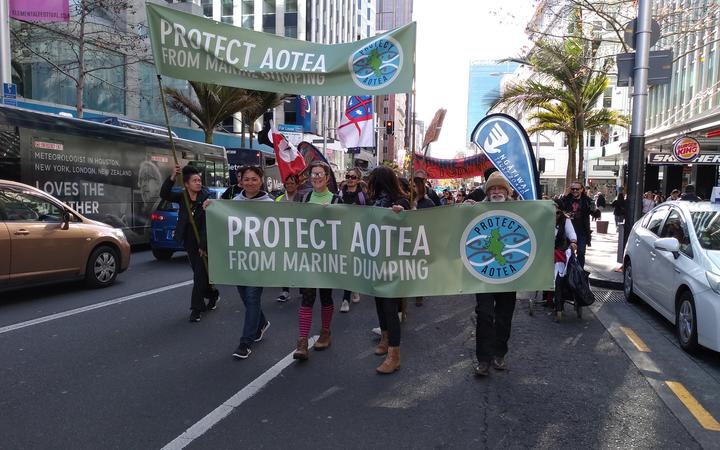 Earlier this month, about 200 people protested on Queen Street over plans for the dumping of waste near Great Barrier Island. Photo: RNZ / Amy Williams

The decision prompted hundreds of people to march against the action on Queen Street in Auckland.

The waste material is to be dredged from new and existing marinas in Auckland and Waikato and deposited 25km from the island off the Hauraki Gulf's coast.

The EPA said at the time consent was granted that any potential adverse effects on the environment from the waste would be restricted to the disposal area and would be negligible beyond the boundary.

The appeal and a judicial review are being heard together in the High Court in Wellington in the name of the Society for the Protection of Aotea Community and Ecology Incorporated (SPACE), and Kelly Klink.

Lawyer Sue Grey, who is acting for them both, told the court yesterday the island's residents were disadvantaged because no hearings were held there. 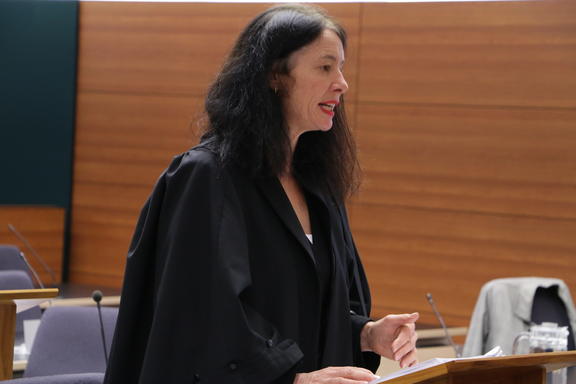 Lawyer Sue Grey, who is acting for the Society for the Protection of Aotea Community and Ecology Incorporated (SPACE), and Kelly Klink. Photo: RNZ / Michael Cropp

She said it was hard for island residents to attend hearings in Auckland - ferry connections are not frequent, flights are expensive, and patchy cell reception makes following the hearings via video conference difficult.

EPA lawyer Andrew Butler told the court today there was no evidence that anyone who made a submission asked for hearings to be held on Great Barrier.

"There was no great demand from people saying 'please come to Aotea [Great Barrier]'."

He said the authority took a wide approach during the notification process and a "huge number" of organisations were notified.

Despite that he said it only received about 70 submissions, and only one submitter asked to speak at a hearing. 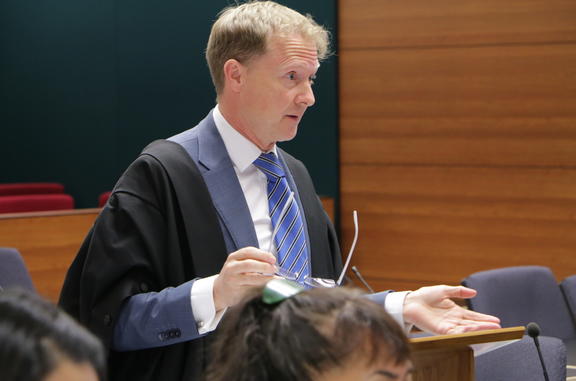 Mr Butler said the EPA could only take into account what was put in front of it, and people needed to participate in the process.

Coastal Resources Limited lawyer Morgan Slyfield told the court this morning he accepted that holding the hearings in Auckland made it harder for Great Barrier Island residents to attend.

Ms Grey yesterday said the authority failed to take into account submissions based on Treaty of Waitangi principles and the UN Declaration of the Rights of Indigenous Peoples.

The EPA said in its submission to the High Court that it did consider cultural values and interests, but there was no evidence the dump site had specific cultural importance, or that increasing the amount of material dumped would have a significantly worse effect on the area.

It said the law covering what was already permitted took the Treaty into account, and it did not make a mistake by not considering it separately.

Mr Slyfield yesterday said there was sufficient consultation, the application was publicly notified, and the company had met its legal obligations.