Hundreds of people marched to Parliament today calling for reform of New Zealand's abortion laws, as Cabinet prepares to consider a bill that would remove abortion from the Crimes Act. 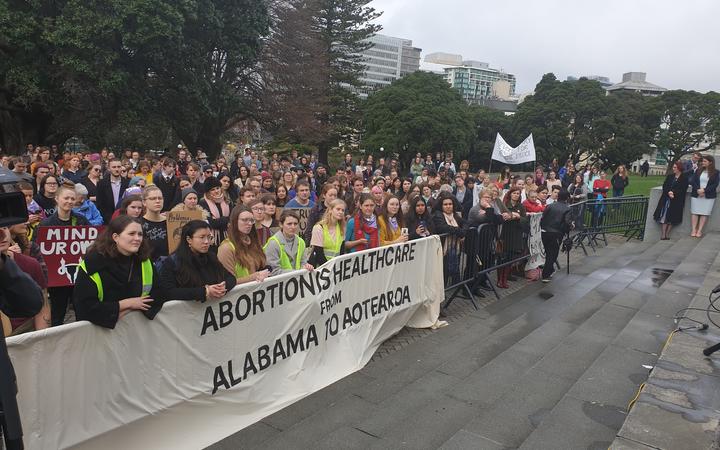 Currently, the law allows for abortion to be performed only to save the life of the mother, or to preserve her physical or mental health - and only if the procedure is approved by two doctors or consultants.

While the pro-choice march was underway, a petition against the proposed law change with 13,000 signatures was presented to MPs.

Pro-choice groups see the bill as a promising step towards decriminalisation, while pro-life groups say it's the most extreme abortion law in this country's history.

Dame Margaret, who has been campaigning for reform since 1969, told the crowd that now is the time for change.

As people chanted outside, Cabinet ministers met inside Parliament to look over a draft bill that would remove abortion from the Crimes Act.

"We are also nervous about what could be added in and whether parliamentarians start fiddling with the recommendations from the Law Commission."

In October last year, the Law Commission presented its advice to Justice Minister Andrew Little, which recommended three options for reform. All of which decriminalised it.

The first option is for a woman and her doctor to decide, another is that a mental health assessment is carried out for all abortions, and the third would only require a woman's mental health being examined after 22 weeks of pregnancy.

Whatever option has been chosen has not been made public - yet - but Ms Edmonds hoped it was the first.

Sue Claridge from the Auckland Women's Health Council also supported this option. She said abortion needed to be treated as a health issue, not a mental health issue.

"It is important that women considering abortion are provided the option of having counselling, but to somehow suggest all women's mental health is so poor that that's the only reason that they have to have some sort of test of their mental health, I don't think that's helpful.

"I think, again, it's demeaning and it takes agency away from women and their own body."

Michelle Kaufman from Family Life International, a pro-life lobby group, said she was disappointed the government was even considering decriminalising abortion.

All unborn children need to be protected from the first moment of their existence, she said.

It was expected the legislative Cabinet Committee would give the green light to the draft bill today. The full Cabinet is then expected to rubber stamp it, before it's debated in the House.

It will be treated as a conscience issue, which means MPs don't have to vote along party lines.

Prime Minister Jacinda Ardern, who has been a vocal advocate for reform, said she did not know how members of the Labour Party would vote.

"Some drafts have been discussed with members across parliament. Obviously they'll want to see the final legislation once that process is complete. Ultimately, this is a matter for them, though, and as I say, I hope it's given due consideration."

National Party leader Simon Bridges would not say if he supported the Bill.

"I want to read it and really think about it before I launch into what will obviously be a controversial topic for New Zealanders."

Senior National MP Amy Adams has been pulled in to help Mr Little with the proposed reform.

Ms Adams, who is retiring at the next election, is broadly supportive of what she had seen of the proposed legislation.

Mr Bridges said this did not concern him as people were entitled to their views.