The country's largest gun retailer is about to open a new mega store in Christchurch - angering some residents living close by who don't want the big, blue building in their midst. 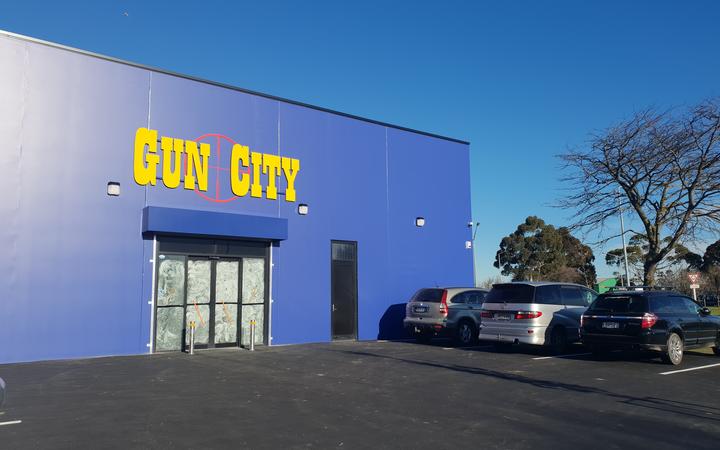 Gun City Sockburn, due to open early next month, is one kilometre from Riccarton Racecourse where the first gun buyback happened at the weekend, and directly across from schools and houses.

Resource consent was granted in January on a non-notified basis but some nearby residents say they haven't forgotten that Gun City sold four A-Category firearms to the man accused of the 15 March mosque shootings.

Harry Singh was among those wishing he'd had a say in the store's location.

"No one told us that there was a Gun City coming to the area. They should have at least informed us before, or they should have taken public opinion," he said.

"We had a such a big incident in New Zealand with guns and I don't think many people will be very comfortable to have guns around their homes, in a residential area."

The new building includes about 300 square metres of retail space plus offices, a warehouse and carpark. Owner David Tipple said it is an "excellent location" because Christchurch is a widespread city with transport difficulties that discourage people from travelling across town.

That includes people like Tom Mee and his friends, who are keen hunters living nearby.

"It's quite useful for us if we want to go for a hunt one weekend or something. All we have to do is walk across the road get new ammo, we don't have to drive all the way to Hunting and Fishing and back," Mr Mee said.

But that sentiment wasn't shared by long-time Sockburn resident Lindsey Corner, who now has a prime view of Gun City from his deck and said another gun store is the last thing Christchurch needs, especially not near schools, day care centres and residents.

"It's taking the shine off the area, and it's is a good area, this. To have a place like that where you can get into guns so easily... I think it should be locked up somewhere else," he said.

The first police firearm collection events at nearby Riccarton Racecourse have been hailed a success, but Mr Corner said the new store will inevitably allow more firearms to be circulated in the community.

The deputy chair of the local community board, Helen Broughton, said because the store is within a commercial mixed use zone, community board members and residents did not need to be made aware of the resource consent hearing.

Ms Broughton said there are worse locations for a gun store than in Sockburn.

"It certainly seems to be away from the standard retail sector so people will have to consciously go there if they wish to purchase guns," she said.

Police said they are still confirming future firearm collection locations for the Christchurch metropolitan area, but would not anticipate any issues with any future Gun City sites.

Meanwhile Mr Tipple said he was sorry that some people are concerned about the store, including those who are frightened due to 'firearm phobia'.

"We are willing and happy to introduce those persons to positives of firearms," he said.