The country's main ski fields have been busy making snow to make up for the shortfall in what has so far been a dry winter. 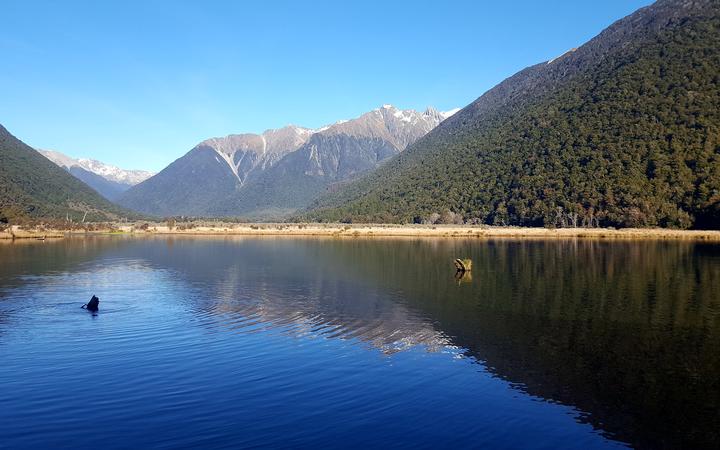 The northern tip of the southern alps near St Arnaud in the Nelson Lakes National Park in late June. Photo: Tracy Neal / RNZ

Managers at Cardrona and Mount Hutt said the season was shaping up to be similar to the previous one, in that the snow was arriving a month later.

"June is now what May used to be like," said Richie Owen of Canterbury's Mount Hutt ski field. He said until now they had been totally reliant on snow made by the crew at the field.

"They've done an amazing job to keep us up and running."

Snow was starting to fall in the south this morning and was likely to reach further up the country over the next few days, MetService said.

Mr Owen said Mt Hutt had been making snow ahead of the influx this week of Australian school holiday-makers, to be followed soon by the New Zealand term break.

He said things had been "on the drier side", but they were managing.

"Two years ago, sure, we were sitting really good at this time of the year but last year it was similar to right now."

Bridget Legnavsky of Cardrona Alpine Resort said last year's season arrived late but it turned out to be the best in 20 years.

She said the difference now was that resorts were dealing with less predictable weather patterns, and that was being factored in to long term planning.

Climate change was also on their radar.

"I'm no expert but I'm watching it closely and what I think will happen is that the change will be gradual and steady. We'll continue to get the ups and downs."

Ms Legnavsky said last year turned out better than expected, while in the late 1990s, before snow making, some resorts did not open due to the lack of snow.

"We'll continue to deal with good seasons and bad seasons, but what we have to keep an eye on is the gradual warming curve, and understanding the timeframe on that."

She said Cardona was investing heavily in improved snow-making technology as part of its short-term planning strategy.

"There's incredible innovation coming out all the time in snow making, including being able to make it at temperatures around 2 degrees Celsius, which is unheard of.

"There's also a lot happening with snow factories where it's possible to make snow at up to 19 degrees Celsius. Even the grooming machines are all so technical now - they have software on them that can measure the snow beneath and spread the snow much more efficiently on the hill."

Ms Legnavsky said the bigger commercial fields had an advantage in that they had the resources to invest in such technology, and that smaller fields might struggle to keep up.

"To invest, you need scale - or numbers and it's not easy to survive with minimum numbers."

She said Cardrona was also pondering a future without snow, and what it might do to adapt.

"There's a big story beyond skiing and snowboarding that we're focused on heavily right now. Putting the gondola in was all about sightseeing and getting people to the top of the mountain no matter what."

Ms Legnavsky said the short-term plan - the next 20 to 30 years - was about innovation, and in the long term it was about diversification.