Several locations around the country have experienced the driest first half of the year on record, and Watercare is calling on Aucklanders to use water wisely. 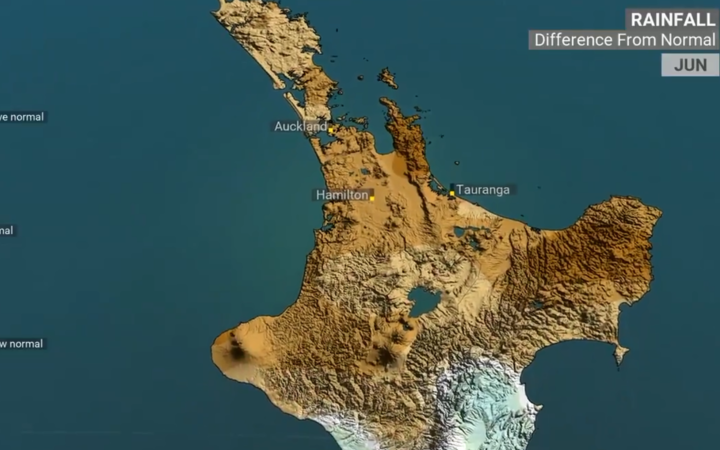 A Niwa scientist says Auckland, Hamilton, Whangārei, Whitianga and Kaitaia have all had the driest first half of the year. Photo: Twitter / NIWA

Watercare said the Hūnua and Waitākere ranges, where its storage dams are located, had about 40 percent less rainfall than normal between January and June.

The city's water storage was a quarter less than normal for this time of year, according to Watercare.

The organisation's head of water value, Roseline Klein, said that while Auckland's total water storage was less than normal, the city benefitted from having a range of water sources including dam, river and aquifer sources.

"We are closely monitoring the dry weather situation and we are carefully balancing our water sources," Ms Klein said.

"At the moment, we are maximising production from our river and aquifer sources to reduce demand on our dams."

Who thought it was a dry June? ‍♂️ ‍♀️

A Niwa scientist, Chris Brandolino, said Auckland, Hamilton, Whangārei, Whitianga and Kaitaia have all had the driest first half of the year, with some places receiving less than half of the normal amount of rain.

"At the airport in Auckland, 321mm occurred during the six months between January and June. Typically during that period, we get about 514mm of rain. We received 62 percent of that," he said.

Mr Brandolino said Hamilton received just under 276mm of rain, which was 53 percent of the normal amount.

"This rainfall really goes a long way to recharging the ground water and recharging the water system, and if we don't see that during the winter season, and as we enter late spring and particularly summer when things usually dry up, that could set us up to being in a bad situation," he said.

"I'm not suggesting that would happen, but we're certainly not going in the right direction."

Mr Brandolino said it took time for the water system to regain balance.

Watercare will be running a Waterwise Winter campaign through social media, radio, its customer newsletter and website over the coming months.

"We want everyone to use water wisely and reduce wastage of this precious resource. This will help our dams to recover over the winter months, ahead of summer 2020," Ms Klein said.

Watercare said ways to reduce wastage include finding and fixing leaks, showering for a less amount of time and washing full loads of laundry.