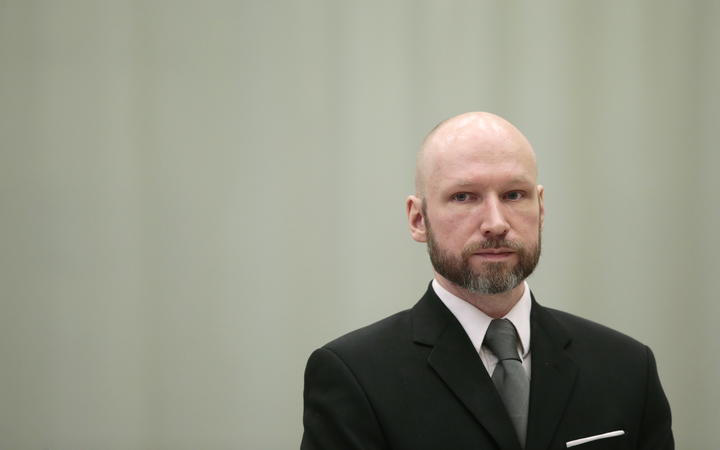 Anders Behring Breivik is pictured on the last day of the appeal case in Borgarting Court of Appeal at Telemark prison in Skien, Norway in 2017. Photo: Lise AASERUD / NTB Scanpix via AFP

But the SIS and GCSB have refused on security grounds to say if they hold other emails about Breivik, who killed 77 people in Norway in 2011.

RNZ has been asking authorities if the Norway attack raised the prospect of something like this happening in New Zealand as a significant threat worth paying attention to - prior to the Christchurch mosque shootings in March.

A Royal Commission of Inquiry is investigating whether the agencies failed to spot warning signs before the mosque attacks.

The single email, released under the Official Information Act, is from an unidentified person inviting spy agency staff to a theatrical production, a play about Breivik that ran in Wellington in early 2017.

The spy agencies say it was a group email to staffers who were part of an association of security management professionals.

The sender said they had been to a "fascinating" presentation by a psychology association about lone-actor violence, then invited people to the play at Circa.

"We can neither confirm nor deny whether the GCSB or NZSIS hold any further relevant emails," the OIA response said.

In an earlier OIA response, the agencies said they had found no record of any emails between them and the minister's office that had the Breivik attack in the subject line.

Two senior representatives from Norwegian Correctional Services, involved in the management of Breivik, visited New Zealand in May to offer their insight into how to best manage a high-profile prisoner.

A 28-year-old Australian national has pleaded not guilty to 51 counts of murder, 40 of attempted murder and one charge laid under the Terrorism Suppression Act in relation to the 15 March mosque shootings.