Environmentalists and fishers disagree over the impact a disease caused by cat faeces is having on Māui and Hector's dolphins.

The government is proposing to significantly expand areas of ocean around New Zealand free of set nets and trawl nets.

It also identifies other threats that need to be dealt with to protect the dolphins including toxoplasmosis and sub-lethal threats such as seismic surveys and seabed mining.

The proposed Threat Management Plan released by Fisheries New Zealand and the Department of Conservation (DOC) estimates that on average 334 nationally vulnerable Hector's dolphins and two nationally critical Māui dolphins die from toxoplasmosis every year due to cat faeces making its way into the water.

However, dolphin expert professor Liz Slooten was surprised the theory that cats posed a greater risk to dolphins than fishing nets had even seen the light of day, and described it as nonsense.

She said DOC and Fisheries NZ were warned by a panel of experts ahead of the release of their proposed plan that the danger posed by toxoplasmosis from cat faeces was tenuous at best.

Forest and Bird's marine advocate Anton van Helden said toxoplasmosis did not mean the threat from fisheries was any less.

"Toxoplasmosis is a thing that we know the dolphins do die of ... however, it's just the largest non-fisheries threat. It's not that there isn't a threat from fisheries. We need to reduce all threat from human-induced mortalities - so all human threat - by 50 percent with the next 10 to 15 years to have any chance to stop these animals from going extinct.

"There's a lot of uncertainty around [toxoplasmosis] ... what it is is there's a proportion of animals that ... had toxoplasmosis but we're still talking small numbers of animals over a stretch of time and whilst we are now recognising this is a disease that affects the dolphins it is still uncertain - highly uncertain - as to whether or not it represents a full proportion of the dolphins' [deaths].

"I think we need to take the most precautionary approach we can."

New Plymouth skipper and trawler Curly Brown said the problem with toxoplasmosis was it was a bigger challenge than changing fishing industry practices.

"The Māui's dolphin is going to be ... functionally extinct by 2060, you're talking 40 years [and] these dolphins are going to be down to 10. This is a grave situation and what's really important is the people of New Zealand understand what's killing them ... the problem with toxoplasmosis is it's much harder to fix."

Mr van Helden endorsed a report released on Tuesday morning by the International Whaling Commission that recommended the Threat Management Plan be reviewed. 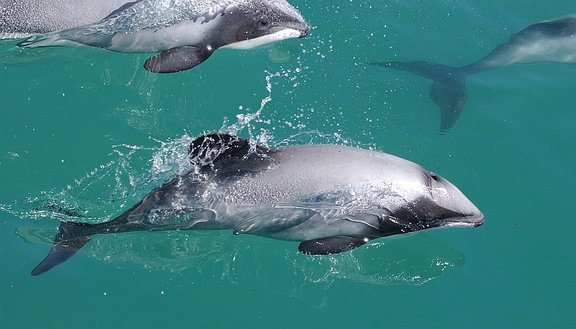 "There are good things about the plan and pushing the exclusion of set nets and trawl nets out as far as we can ... is fundamental.

"The thing is we are not stopping [fishers] from going fishing, we are suggesting they use methods that don't kill dolphins."

He suggested longlining as a method that could be used to allow them to keep fishing.

"It's fundamental that we have full observer coverage across the whole fishing fleet ... simply putting cameras out in the Māui's habitat it doesn't stop the death of a dolphin."

Fishing skippers say they will be put out of business if proposals to protect endangered dolphins by significantly expanding areas where set nets and trawl nets can't be used go ahead.

Skipper Curly Brown said many of the options under the plan would be terrible for the fishing industry but also said there should be grave concern about the future of the dolphins.

He claimed any more increase into the restriction of commercial fishing would cause next to no or no effect on the dolphins.

"What [the Threat Management Plan] also discovered was what is overwhelmingly killing these dolphins is toxoplasmosis ... in the threat management plan that came out that trawling caught one of these dolphins every 100 years."